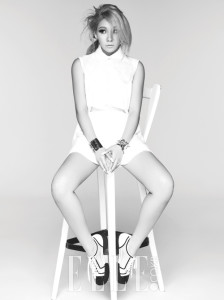 Ready or not, here it comes! CL will join the Black Eyed Peas on their new album, filling in for Fergie who is working on her own respective solo.

Earlier this month, will.i.am tweeted 2NE1’s leader for another collaboration project. She replied with an enthusiastic “YESSS” to confirm acceptance of the idea. Previously, 2NE1 worked with will.i.am for the song “Gettin’ Dumb” off his #willpower album. In the past, CL posted many photos through social media of her close friendship with the Black Eyed Peas frontman. He also visited the YG Entertainment building quite often so this collaboration comes as little surprise.

Social media has been buzzing that chanteuse Ariana Grande will be another collaborator on CL’s U.S. debut album as well. Considering they are both under the management of Scooter Braun, who also worked with Psy, this could prove to be quite the power move for a successful debut. Photos of CL in the studio with hit producer Sean Garrett and songwriter Bobby Brackins also ignited rumors of more collaborations, which may or may not include Florence and the Machine.

As various U.S. media outlets take notice of “the baddest female” rapper, one can’t help but wonder how this will all play out. Given the caliber of artists she has been linked to lately, all signs point to a greater chance of success in the U.S. Market.