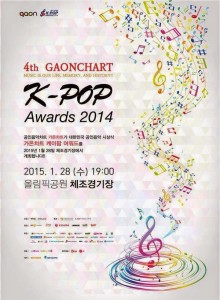 On January 28th, some of the most popular artists gathered at Seoul’s Gymnastics Olympic Stadium to celebrate the most successful chart-topping songs and albums of 2014 at the 4th Gaon Chart K-pop Awards.

The Gaon Awards are distinguished from other award broadcasts because the awards are largely based on songs’ and albums’ domestic performance. The awards are derived from the Korean Gaon Chart — which can be understood as a South Korean version of the Billboard and Oricon charts. Therefore, if you’ve kept up with music show wins and chart toppers throughout the year, the victors of the Gaon Chart K-pop Awards rarely come as a surprise.

Beyond the predictability of the awards, the Gaon Chart K-pop Awards have the unfortunate position of broadcasting last after the string of Gayo Daejuns, Golden Disk Awards, Seoul Music Awards, and the MAMAs. At this point in the 2014/2015 awards season, it’s difficult to muster up enthusiasm for songs that not only have been performed at all the previous year-end awards shows, but also were chart toppers that we saw on weekly music shows for weeks on end throughout the year.

That being said, a few performances still managed to stand out during the fourth annual broadcast. The broadcast also managed to showcase a few fresh faces like EXID, MAMAMOO and Park Bo-ram, who were largely absent from other year-end awards shows.

First up, we have Sistar with “I Swear” and “Touch My Body.” Although we’ve seen these two songs performed several times already, the groups Gaon Awards stage was very well executed — from the vibrantly colorful graphic intro to the ladies’ vocals. One of the main strengths of Sistar as a group is that they always look like they’re enjoying themselves when they’re on stage: this performance is no exception.

The rise of EXID was one of the most heartwarming success stories to come out of 2014 K-pop. Although the sound quality and vocals were a little shaky at times, watching the girls perform “Up and Down” with such an enthusiastic response from the audience made the performance stand out.

While a small part of me was heartbroken that he didn’t perform his 2014 hit “Shall We Dance With Mr Lim,” there is no denying that senior Lim Chang-jung gave one of the best performances of the evening with his classic, “A Glass of Soju.”  Although both the song and the artist have aged, Lim Chang-jung managed to pack so much emotion into his performance that it was no wonder he received a standing ovation from his juniors.

The ladies of AOA stripped down with a slow rendition of “Short Hair” before performing “Mini Skirt” and “Like a Cat.” If their performance was any indication, 2014 was quite the year for AOA. Yes, Choa fell slightly off-beat early on in the performance, but she quickly caught herself the overall quality of her vocals and the performance out-shined the minor slip up.

One thing I really appreciate about EXO‘s awards show performances this year is that they’ve managed to perform a different B-side at each broadcast, giving some diversity to each stage. Baekhyun and D.O. took the introductory and vocal lead for “Moonlight” before a Lay‘s dance solo that served as a segue into the expected performance of “Overdose.” Unfortunately, EXO’s performance was largely overshadowed by the very vocal audience — which at times was so loud the vocalists couldn’t be heard.

If you thought EXO’s performance was slightly on the long side, then Super Junior‘s eight minute stage consisting of “T-Shirt,” “This is Love,” and “MAMACITA,” was definitely a little excessive. However, since Super Junior did take a triple crown that evening, it only seems fitting that their chart success should be reflected in stage time. Also, Elfs were given the opportunity to see member Sungmin for the first time since his December nuptials.

MAMAMOO was definitely one of the most vocally impressive groups to debut in 2014, and their performance of “Piano Man” showcased everything they have to offer. The styling was also impeccable with two members dressed in suits and two in dresses. The ladies of MAMAMOO didn’t need multiple songs or an extended set to steal the show, and I think that speaks volumes towards their talent as a group. With all that charisma combined with the amazing live vocals, the ladies are my pick for best performance of the evening; watching them later win Best Female Group was simply the cherry on top.

Now that some of the performance highlights have been covered, check out the full list of winners below: 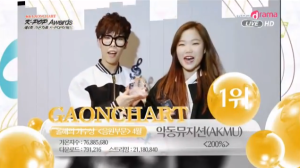 November: MC Mong – “Miss Me or Diss Me” 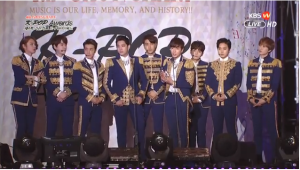 This is based quarterly; first quarter is (January – March); second is (April – June); third is (July – September); and fourth is (October – December).

World Rookie of the Year: BTS

Long-run Song of the Year : Soyu x Junggigo– “Some” 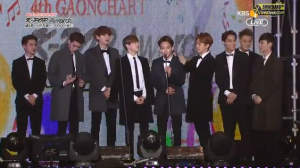 Hot Performance of the Year: AOA 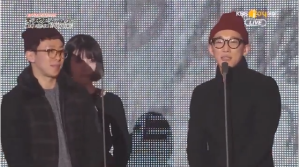 Style of the Year

Producer of the Year: Kim Shi-dae

Readers, whether you tuned in live, streamed online, or caught up with the performances the next day: how do you feel about the 4th Gaon Chart K-pop Award winners? What stages were your favorite?