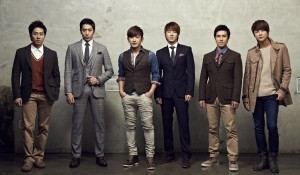 Classic boy band Shinhwa is set to make a comeback in February of 2015! ShinCom Entertainment confirmed that all six members would come together to release their 12th studio album in late February. The company also revealed that the group has plans for concerts and other promotional activities in 2015, promising fans an exciting year.

This announcement comes at the end of a pretty inactive year for the group. After the release of their last album, “The Classic,” in 2013, the members took 2014 to focus mainly on solo activities. With preparations for their 2015 album nearly complete and rumors floating around about a January comeback, ShinCom finally told fans to expect the group to return during the end of February. 2015 will be Shinhwa’s 17th year since their debut in 1998, and anticipation for their newest release is high.

As the oldest boy band whose original members have all stuck around, Shinhwa is somewhat of a rarity in K-pop. In many ways, the members are carving a path for younger idols to follow, and their longevity is inspiring considering how quickly trends rise and fall within the industry. When thinking about the future of K-pop, the group represents a viable model for how groups can mature in an industry that seemingly thrives on youth.

So, readers, are you excited to see Shinhwa make their return next year? Be sure to stay tuned as more updates and details are announced, and watch to see what Seoulbeats thinks of their comeback!