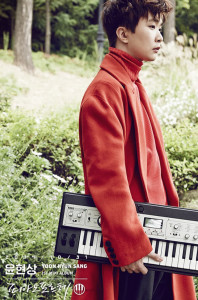 Almost three years since his first appearance on K-pop Star, singer-songwriter Yoon Hyun-sang has finally made his long-awaited debut. His first self-composed album Pianoforte features two title songs, one of which is “When Would It Be,” a duet with same-aged friend and labelmate IU.

IU has done quite a number of collaborations this year, but she has mentioned several times in interviews that this time around she was the one to make the initial approach to Yoon Hyun-sang to ask to perform his song with him.

The end-product is definitely desirable — IU’s high and airy timbre is well-complemented by Yoon Hyun-sang’s smooth, gentle voice, and when their voices overlap, they create a beautiful harmony. Although the melody lacks much variation, their vocals communicate a poignant feeling that fits the theme of the music.

“When Would It Be” is a monotonic ballad, and although it is an impressive effort for a self-composed debut song, it’s rather simple in its melody and instrumentation. However, the simplicity of the song plays to Yoon Hyun-sang’s advantage, as his vocal and piano-playing talent shine through as a result. What the composition of the song lacks, the execution makes up for.

The beginning starts off quiet and thin in texture with Yoon Hyun-sang singing accompanied by only the piano. As the song progresses and IU performs her parts, the dynamics gradually increase, and strings and drums are also subtly introduced. There is a sudden drop in volume in the bridge before the song builds towards a climactic ending, as Yoon Hyun-sang and IU’s voices rise, melded into one, then fade out on the last line. The swelling and quietening of the music effectively delivers the emotions of the story, and in a way, this title song is an expression of the title of his album — it contains both “piano” meaning quiet, and “forte” meaning loud. 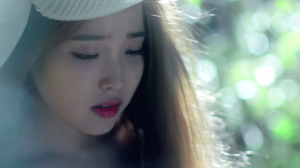 The song’s lyrics are quite poetic, but not different from what the typical ballad has to offer: they speak of a person who has undergone a break-up yet is unable to move on and still wishes to wait for their lover. Yoon Hyun-sang and IU have clarified that they are not lovers in the song but are rather singing about separate relationships. However, there is a moment in the latter half when the two alternate lines, creating the effect of them appearing to be speaking to each other, again demonstrating their vocal chemistry. The duo’s reminiscence of past memories is expressed in the verses, with the refrain asking when would they be able to warmly interact with each other again:

And ask each other how we’ve been with a smile

Would that be possible

The music video further reflects the theme of the song. It begins with a casually dressed IU with a guitar slung over her back encountering Yoon Hyun-sang, playing the piano in a tunnel-like setting. The scenes then cut between reality and a fantasy portraying the concept of waiting. Yoon Hyun-sang sits at the piano in a deserted room covered in cobwebs and overgrown with greenery, while IU is seated with long locks in the midst of the trees, like a Rapunzel waiting for her prince. When the video cuts back to reality in the end, the Yoon Hyun-sang from the beginning of the video has aged. 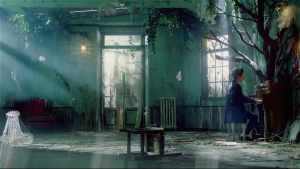 The video’s cinematography is outstanding as usual for 1theK‘s MVs. The sets of the fantastical scenes are elegant, and their colours and soft lighting stand in contrast with the dark tone of the tunnel, emphasising their dreamlike quality. Although little acting is required on the parts of the two singers, they manage to convey the melancholy feeling of the song.

On the whole, Yoon Hyun-sang’s “When Would It Be” is a solid title track composed well and executed better, with IU’s addition serving as the cherry on top. His debut has certainly not disappointed and is a step in the right direction in succeeding as a singer-songwriter in the future.