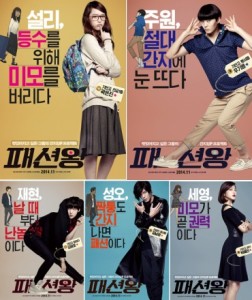 Well, there is good news and bad news for the premiere weekend of webtoon-adapted comedy movie Fashion King. The good news is that Joo Won once again proves that he is not only a solid actor but also has box-office power. The bad news comes from audiences reviews, which have not been kind to the movie.

Fashion King made it to the big screen with much anticipation, chiefly surrounding its casts. Joo Won is arguably one of the hottest actors right know, and should he successfully pull off his portrayal of Woo Ki-myung — a fashion terrorist turn a fashion king — it may cement his status as one the most versatile actor in showbiz as well. The movie is of course also the first acting appearance for f(x) member Sulli since her dramatic hiatus back in July. People are wandering whether Fashion King screening might just be her comeback moment. So, Fashion King has a lot going for it.

Such anticipation has proven fruitful commercially for the movie. Fashion King has already raked in a total of more than 2.5 billion KRW in its first four days of screening. With over 300,000 in attendance, the movie only trails in attendees to Hollywood blockbuster Interstellar. The movie is especially popular among teen and young adult audiences.

Audience reviews for the movie, however, are polarizing to say the least. While many audiences did indeed enjoy the movie’s hilarity, some are criticizing the movie because it’s more on the boring side. It seems that those who love the original webtoon are more inclined to enjoy the movie as well. Netizens have rated it on average 6.2 out of 10.

Meanwhile, movie critics have praised Joo Won for his great portrayal of Woo Ki-myung. They believe that Joo Won is probably one of the best method actors currently in the business. His immersion in his role has brought Woo Ki-myung to life and has made him the standout character, especially in contrast to the rather harsh criticism of Ahn Jae-hyun and Sulli’s acting. Critics have also pointed out the movie for its weakness in story line. One of the criticisms is that the movie seems to be unable to balance the gag humor and the emotional side of the story.

The general consensus, though, is that Fashion King is a movie that should be enjoyed lightly and loosely. The movie is still fun and hilarious by its own right if you love an underdog movie and fashion.

Have you watch Fashion King yet? What are your thoughts?