Side B: A Happier 2AM 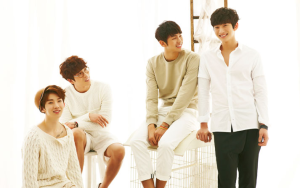 2AM and sad love songs are synonymous — and the way the group makes money. With their latest release Let’s Talk, they continue that trend. It’s really no surprise that sad love songs are their bread-and-butter; they are a wonderful vocal group.

However, that’s not all there is to 2AM. The group’s attempt at a dance track (“I Was Wrong“) is still seen as a bit of an anomalous concept that the group shouldn’t try again. That doesn’t stop the group from continuing to release more up tempo and optimistic tracks on their albums, though.

For this Side B, here are some of 2AM’s more uplifting love songs.

2AM’s first EP, Can’t Let You Go Even if I Die, offered a glimpse into the group’s ability to go for a more upbeat song. For this, the group enlisted the talents of Big Hit artists, Baek Chan and Joo Hee of 8eight. “I Love You” is an electronic R&B track in which 2AM puts the blow-you-away vocals on the backburner and shows off in a more constrained manner. Despite this, the vocals are still clear and strong with a sweet lilt. This matches well with the slightly sensual groove.

The song isn’t just upbeat, the lyrics are too. Before finding their special love, the subject was intent on avoiding love and relationships. However, now, the subject is dumping all his mental blocks, and embracing what his heart tells him. He’s enthusiastically expressing is love.

The hook, particularly the English lyrics, also makes this song easy to sing along with.

“I Love You, I Love You,” from their second EP, F. Scott Fitzgerald’s Way of Love, is another non-sentimental track. Composed and written by member Changmin, it has an old school flare and sounds like something the Bee Gees would sing. This is largely due to the scratchy record and muted vocals in different parts of the song. Additionally, “I Love You, I Love You” has a funky, soulful groove, particularly during the bridge. From the strong bass to the claps, the song is a song that can make you bob around.

This song is really the only lyrically optimistic track from F. Scott Fitzgerald’s Way of Love. It articulates the powerful emotion that is love — so powerful that you can’t help but confess over and over again.

“Sunshine” is probably my favorite upbeat song from 2AM. It is more befitting of an album called One Spring Day than the more melancholic tracks. Even the title brings on a smile. The song is an acoustic R&B track, complete with clapping sound effects. Although the tempo is a bit slower, it still gives off happy vibes.

For the lyrics, there is a semblance of overwhelming happiness.  Sunshine has the ability to brighten one’s day, both literally and figuratively. That’s what the loved person is for the singer. She makes them happy, like they are in a dream world.

If you love 2AM and need a mood lift, then check out the happily sappy “Sunshine.”

The final upbeat song is “To An Angel” from the Nocturne EP. 2AM once again returns to the more electronic songs. However, it isn’t without strong acoustic ballad instruments, such as the prominent guitar in the verse. Perhaps this is due to Jinwoon being the lyricist and composer behind the song — we know he loves his rock. By combining these electronic and rock ballad sounds, “To An Angel” seems more like a boy band pop ballad and less like the typical vocal-band style of the group. Yet, the power vocals are more to the forefront than the other songs mentioned on the list.

“To An Angel” is an ode to the woman the man loves, of course (this list is nothing but love songs). The song is a confession of love that the man will continue to sing, despite falling short in other ways. Say it with me everyone: “d-awww.”

2AM’s discography is predominantly sad and emotional songs about love and heartbreak, but singing more up-tempo songs doesn’t take anything away from the vocal power of 2AM. You can still hear why they’ve quickly gained favor as a vocal group. Honestly, I think they should sing more happy songs, as it adds to the overall character of the group. By not sticking to just the melancholy, variations of track styles offer a little something for everyone, which is how the group will keep making that money. Sometimes, those silly love songs are welcome sappiness.