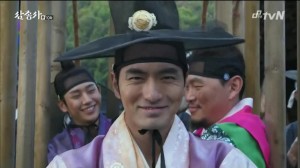 Three Musketeers is the follow-up drama which reunites Lee Jin-wook with the production team behind Nine: Nine Times Travel. And if you, like me, got totally mindblown by all the twists and turns of Nine, Three Musketeers pretty much seemed like a gift from heaven to relive that same crazy suspenseful roller-coster. Add to the fact that Jung Yong-hwa and Jang Dong-geun would be co-starring, expectations were obviously high for this series — especially with three seasons to boot. Each season will cover a different event in history, but with the same characters and (likely) cast.

In case you are confused as to why there is an F4 in the drama, the “three musketeers” refers mainly to the long-time best friend trio of man-ahead-of-his-times Crown Prince So-hyun (Lee Jin-wook), the ruffian of noblemen Heo Seung-po (Jang Dong-geun), and pretty boy Ahn Min-seo (Jung Hae-in). Country bumpkin Park Dal-hyang (Jung Yong-hwa) arrives in the capital for the first time and somehow gets entangled with the matters of the three, and is unofficially the fourth musketeer. 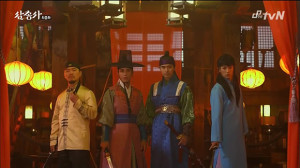 My main nitpick was that the drama never made me care very much about the big picture Manchu-Joseon relations, even though that was the main issue the characters were fighting for. It was a strange disconnect, seeing the musketeers so intently worried about the Manchu envoys, but the weightiness of the subject never seem to transcend the screen to the viewers. But putting that aside, the solid characters and their entertaining interactions was what sealed it for me.

First off, with a title such as Three Musketeers, you can’t skimp on the bromance — the camaraderie, the trust, the loyalty — everything came through from the actors’ chemistry to the script. Even in the midst of fighting a huge army, you can always trust Seung-po to crack a joke, and all four of them to strike a pose after winning the fight. The light-hearted humour was exceptionally well-placed, balancing out the gravitas of most of the scenes.

The development of the relationship between Dal-hyang and So-hyun was quite unique and heartwarming. The initial tension that arose due to the Crown Princess (Seo Hyun-jin) was enough to make both boys pissy and jealous of each other. But the way Dal-hyang managed to rise above those emotions — putting his duty for the country above his pettiness towards So-hyun — steered them away from the typical angst. Giving up a first love is never easy, but giving her up out of loyalty to someone is something that says a lot about Dal-hyang’s character. Being satisfied with just watching over her from So-hyun’s side, Dal-hyang’s unrequited love gave me the fuzzies and I love him for his graciousness. 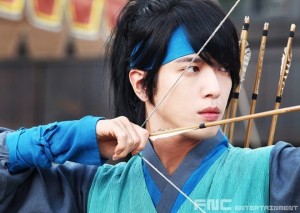 Partly why Dal-hyang was such a good addition to the trio was that his background made him naive and innocent, something rare in the palace setting. Him joining the musketeers was a great learning experience for both sides — Dal-hyang becoming more politics-savvy, and the other three learning more about steadfast loyalty and sacrifice.

And can I just mention how far Yong-hwa has come since his wooden days of You’re Beautiful? His hard work definitely brought through the earnestness of Dal-hyang and even his crying scenes were not awkward in the least. This project is a great addition to his resume, and I’m really glad that he finally managed to shake off that bad actor stigma. It goes to show how a great script and an awesome cast can buoy a lacking actor.

The Crown Princess was another character I rooted for from the start, and the actress did an absolutely bang-up job portraying her vulnerability alongside her endearing quirks, and it’s no wonder the two main leads were so head-over-heels for her. It would have been easy to characterize her as a dumb damsel-in-distress, but the running joke of her inability to lie and her clumsiness made her a very relatable and charming character — even if she was the source of quite a few problems. But hey, when you have four bodyguards running all over the place to find your hairpin, why not? 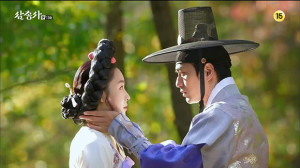 Her journey as Crown Princess was not always smooth-sailing, which made her eventual happy ending with So-hyun very gratifying. Her self-doubt was so heartbreaking to watch, and her wish to get ousted from the palace to live with someone who loves her is such a basic human desire. It must have been a such a humbling confession for her to make, but alas, all hearts are not made of stone. When So-hyun finally realized that he has feelings for her, I could not wipe the smile off my face.

I thoroughly appreciated that her identity wasn’t just crafted around the men’s love for her. Her guardian angels are not always there with her, and she eventually realizes that there are times that she has to fend for herself. Her face-off with Hyang-sun (Yoo In-young) was the push she needed to find her own two feet, and it was a significant milestone for her character.

On the villain end, Yoo In-young also did a remarkable job as the unhinged, psychotic Hyang-sun. Her wily intelligence allowed her to use her talents to her advantage, and she especially knew how to twirl So-hyun around her little finger. Her back story was well-developed, if not terrifying, and I found myself believing that she became a victim of her circumstances. She was such a good villain that I wanted to strangle her and her last words served as a chilling introduction to Season 2 — Hyang-sun is here to stay. 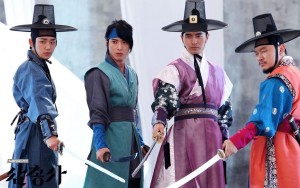 While Three Musketeers was anchored mainly by the characters and their emotional stakes, the heavy emphasis on palace politics and the ministers did a huge disfavour to the show. I can’t even count how many scenes there were of the grovelling ministers and shouting king. While politics can’t be excluded from a saguek, I wished it could have been written and edited in a more riveting manner, allowing the viewers to actually care about the stakes involved.

Overall, though, I’m still a fan of the smart characters, the in-depth characterizations of the main leads, the layered female characters, and of course, the smile-inducing, adorable bromance. Anyone else enjoy the Season 1 ride enough to tune in to Season 2?