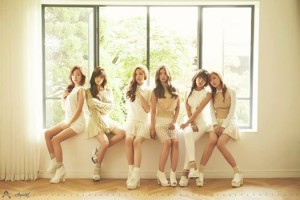 Originally expected to make a comeback on the 17th of this month, A Pink’s agency A Cube Entertainment released a statement in which they apologized for extending the girl group’s highly anticipated comeback to November 24th.

After the success of their fourth mini album Pink Blossom last March, Pink LUV is expected to bring just as much, maybe even more excitement due to the eight months fans had to wait out and the new delicate concept guaranteed by the teasers.

To the fans of our lovely and bubbly girls, don’t be dismayed because A Cube Entertainment also promised that the group would still be promoting on the same schedule, with a performance on KBS Music Bank confirmed for November 21st.

A Pink has been diligently releasing teaser images for their new concept which, uniquely enough, does not stray too much from their usual cute and girly style and also introduces a new level of elegance and maturity. To go with A Pink’s teaser images, we have received two video teasers “Pink LUV” and “Pink LUV Rolling.” The latter showcases songs from their upcoming album, which seem like a promising collection of ballads. These songs are composed to suit their new concept as it is portrayed in the former.

New sound, new image? Yes and no. Although Pink LUV is not completely devoted to the concept we like to link with “the only girl group that has never strayed from its debuting theme,” the images show an extremely muted and subtle femininity that remains tied to the concept of innocence and youth, but in a much more cultured and mellow way.

To the girl group that never disappoints, let’s look forward to sweetening with them and their style and sound.