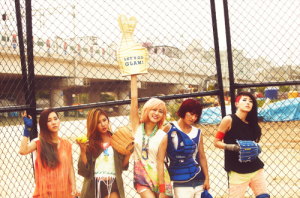 GLAM, oh, GLAM. I still remember when you debuted, now two and a half years ago. 2012 wasn’t an easy year, but you still managed to garner some attention with that concept that wasn’t either sexy, cute, nor 2NE1 and those sexually ambiguous lyrics. It felt like a breath of fresh air, and now, two years, three promoted songs, a couple of OSTs and two scandals after, your future is uncertain — and that’s an euphemism — and I’m worried.

So GLAM debuted on July 2012 under Big Hit Entertainment, the same label as 2AM, while starring in a reality show that followed the group until their debut. Although promoted as some sort of hip hop concept — they had two rappers, after all, which is not so usual in girl groups –, “Party (XXO)” was more of a party anthem, and although the song didn’t have a big impact in Korea, it did among international fans with lyrics that seemed an ode to same-sex relationships (and co-written by labelmate BTS‘s Rap Monster, as I recently found out).

They had their first scandal that same year when member Trinity decided to leave and rumor had it that she used to be a sasaeng fan of Super Junior‘s leader Leeteuk, but since she was out of the group anyway (and she didn’t have any single line in their debut song), it seemed they would be able to recover and go on as a 4-member group.

And they did, actually. 2013 was the year the were meant to make it big. First, they released “I Like That.” Again, a song with an empowering message and that, despite being against the almighty SNSD, did pretty well on the charts. They followed with “In Front of the Mirror,” which, although clearly overlooked, was a fantastic addition to their small discography, and that same summer member Da-hee landed a role in the star-filled musical drama, Monstar. Not only did the drama fair well, but Da-hee’s character actually garnered a lot of positive attention. 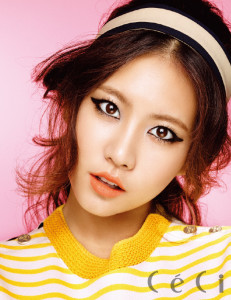 It seemed like the right time to release a new song, maybe a mini-album, hopefully a full-album, yet during the second half of 2013 they seemed to fall under the radar again. Sure, they had a couple of CF deals, Da-hee participated in an OST with labelmate 2AM’s Changmin, and Zinni had some variety appearances, but overall they weren’t much in the spotlight.

A misstep from Big Hit Entertainment? Well, it seems so, since 2014 found GLAM with only three singles under their belt. Not a rookie group anymore, not yet getting anywhere near being an established one, 2014 didn’t look all that promising. They released an awkward Valentine’s Day single, “Give It 2 U,” and Zinni participated in dance audition program Dancing9 until her elimination a bit before the final stage of the program, but the rest of the members were MIA.

That is, until Da-hee was involved in the Lee Byung-hun blackmailing scandal last month. Not much has been discussed about the future of GLAM. Although the company hasn’t released any official statement about the whereabouts of the group, it seems widely accepted that Da-hee is not a member anymore — if only because she could be facing up to 5 years in prison. But what does that mean for GLAM? Will they try to overcome this scandal (doesn’t seem like an easy task, but none of the other members where involved in any way) or will they call it quits?

Honestly, since their future didn’t look all that promising before, it is hard to believe they will recover after this. Lots have been written about how disproportionate the sentence of both Da-hee and her friend are facing seems as compared to other violent crimes. And yes, blackmailing is serious business and should not be excused, but it has also been revealed that Da-hee had a debt of around $300,000 with her agency which didn’t look as if they would be payed back anytime soon since she did not have any promotional activities in almost a year. 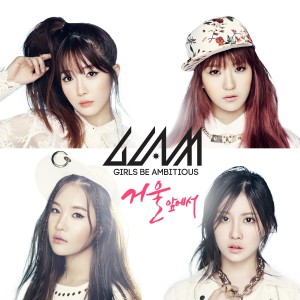 Is the agency at fault? Well, obviously not, since the other members are probably in a similar situation — and lots of other idols, probably — and none of them had to resort to actually commit a crime (plus the fact that Da-hee and her friend had actually bought plane tickets to Europe beforehand, so it doesn’t look like she was just trying to pay back her debt). Did the agency mismanage GLAM? Well, yes. But they wouldn’t be the first agency to ever mismanage a group.

And regardless of the reasons Da-hee may have had for the blackmailing, I will also always lament the loss of a group with the potential GLAM had. Not only were they all pretty consistent singers and dancers, but I will always remember what I thought when they first released “I Like That”: they are as if 2NE1 and miss A and all those groups we have been told to believe are all about women empowerment, but with a real feminist message.” Sure, they only released three singles, but they were three fantastic singles with fantastic lyrics that lead me to believe they could actually become the first girl group to make a concept out of woman empowerment and actually back it up with their songs.

For now, I will keep hoping that Da-hee gets a fair sentence and that the rest of the members find their way out of this, while I replay “I Like That” like it’s nobody’s business.