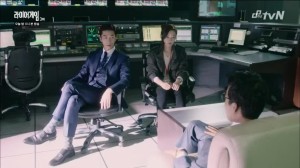 So, there’s good news and bad news about the next pair of Liar Game episodes. The good news is that these episodes are tightly written, engaging, and full of twists that are suffeciently foreshadowed, but not obvious. The bad news is these episodes revolve around . . . dun, dun, dun . . . math. I want to be clear about this: I. Don’t. Math. Good. I have a very fuzzy grasp on math in general and haven’t taken stats since high school. I have no idea how the mechanics of this episode worked.

Spoilers and Statistics Ahead

Episodes 3 and 4 of Liar Game detail the second round of the in-universe Liar Game. Unlike last week where competitors were matched off in pairs, this week, all 22 remaining competitors are taken to a rural building to compete in an intense psychological match against everyone. And yes, 22 competitors. While half had been eliminated last week, there are two additions: a plant of JvN Director Jung — known to audience and competitors as Betrayer X — and none other than Woo-jin.

Apparently, the call of learning just who was behind the shell company who embezzled from his mothers’ nonprofit was too strong for him. Woo-jin has been swayed by Do-young to join the game. Point, Do-young. Da-jung is hurt, but doesn’t hold his entry against him. After all, their agreement was for round one only: Da-jung is continuing when she said she wouldn’t, so Woo-jin is free to act in his own best interest.

The contestants are taken to an abandoned building and explained the rules of the game. They will be asked yes or no questions, and whoever is on the minority side gets to advance. In the end, the last person standing will get $2,000,000 and will go to round three. When asked about how those eliminated can hope to continue, Do-young simply says there is a losers bracket, so more than just the last one standing will be able to move on.

Woo-jin quickly realizes there is a way to beat the game. In short, form a team of 8 people and split the yes/no votes down the middle each round. That way, exactly half will be able to move on, no matter what. To ensure this cooperation, the team must agree to split the $2,000,000 evenly. Woo-jin gives Da-jung the task of recruiting 6 others to their team, as she is the nicest and most honest, so the others will realize they’re not being scammed. Yeah, Woo-jin, that’s why she was your first choice. Uh-huh.

They do so, recruiting an eclectic bunch, including an ajummha who refers to herself as “The General”, civil exam student Jung-ah, a gambler, and a lawyer — insert evil lawyer joke here — who draws up a binding contract between the members. They show the contract to the PD team via the cameras, and each member gets a call confirming their actions.

The game starts as expected, with all the contestants chatting about just who Betrayer X is; most believe him to be a mysterious young man who won’t remove his sunglasses in order to no sell Woo-jin’s people reading skills. However, after round one, Woo-jin somehow realizes that there isn’t one team through math. There are three, with one person as a member in all, and able to take the whole prize for themselves. I don’t get how, it involves math. Just trust Woo-jin. He maths good. 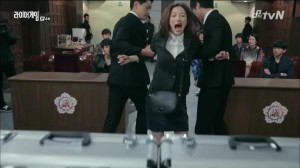 Eventually though, the competitors get narrowed to four — Woo-jin, Jung-ah, Sunglasses Guy, and a woman with no plot relevance. When Jung-ah is called on for her vote, she gives an excellent display of crazy and explains just who Betrayer X was: herself. She didn’t sign the contracts with her legal name, Jamie, so all the cash is hers. Until Woo-jin reveals that, no, he figured her out, and swapped her out for Sunglasses Guy in the re-vote. Do-young and PD Lee are both pleased, as their favorites will get to advance — anyone with a share of prize money advances — and they’re rid of Director Jang’s plant. That is, until Director Jang strong-arms them into allowing her to continue on. The game is down to nine.

I love how this pair of episodes played out. I was afraid that the game would have the same set-up every week, which would get old fast. Instead, they’re changing the game. More than that, they’re changing the theme. Episodes 1-2 ran on the belief that you cannot trust anyone. This time, trusting people is the only way to win the game. The reason anyone with a portion of the prize can move on is because only by forming a team can anyone win at all.

We get some great moments between Woo-jin and Da-jung. Despite the fact that they’re now competing, they are still friendly. They share a wonderful conversation about how the competition is idiotic: Da-jung points out that if everyone just stopped competing, they would all have plenty of cash. Woo-jin responds that that would only work if everyone is like her, but her selflessness is a genuine rarity, so she would get hurt in the end. So says the guy who twice ensured that she left this round with prize money. No wonder the in-universe audience actively ships them.

These two episodes are the most exciting two hours of television I have seen in a long, long time. Writer Ryu Yong-jae and director Kim Hong-sun had me literally tearing my hair out over talking heads and statistics. I had to rewatch it three time to understand the plot.  It’s tense, nail-bitingly so; a truly magnificent plot. In fact, that’s honestly the only bad thing I have to say about the episodes: TOO MUCH FUCKING PLOT.

There is almost nothing but plot. Want to know why I didn’t say much about the characters and their development? They have none in these episodes. The closest these episodes get are beats. Woo-jin drags Da-jung past the eliminated contestants to prevent a repeat of episode 2, and gives his winnings to keep Sunglasses Guy in the game for the same reason. PD Lee wants Da-jung to win, partially due to sympathy. Woo-jin’s former cellmates eagerly tune in to the next episode in-universe, wanting to support Da-jung, who they all refer to as little sister. Still, these are quick, fleeting moments that give a taste of a world so rich that these tastes just make you angry when they’re all you get. Balance, Liar Game. Balance. And less math.