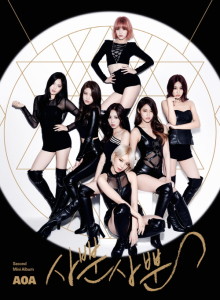 Five months after their last comeback with “Short Hair,” FNC Entertainment has announced AOA‘s comeback for November with the release of the jacket teaser photo as well as the tracklist for their second mini-album, Walking Softly (Sappeun Sappeun).

FNC Entertainment has also revealed the schedule that will lead up to their comeback, starting with the release of a spotlight teaser on the 5th, a highlight medley on the 6th, the MV teaser on the 7th and finally the MV on the 11th.

The mini-album will consist of 6 tracks, including title track “Walking Softly,” “AOA,” “A Woman’s Usage,” “Time,” “Alone” and “Wheel Lily.”

After the success they have experienced this year with their last releases “Miniskirt” and “Short Hair,” it seems like AOA is trying their luck again with a sexy concept. Will they succeed again? We will have to wait and see, but it doesn’t seem like AOA’s popularity will fade out any time soon.

Are you anticipating AOA’s comeback?