Daejong Film Awards, or Grand Bell Film Awards, is certainly one of the most prestigious silver screen film awards in Korea. It has been called the Korean equivalent of American Academy Awards.

The 2014 Daejong Film Awards is in its 51st edition since its inception in 1969 and is the oldest continuous film awards currently held in South Korea. This year’s event took place on November 22 and was held at KBS Hall in Seoul.

Before the event, many predicted that it would be a straight fight between box-office smasher The Admiral: Roaring Currents and The Attorney, with nine and eleven nominations respectively. Although that was mthe case on awards night, A Hard Day also threw some surprises. The Admiral: Roaring Currents bagged four awards, including the prestigious Best Film Award, while The Attorney also managed to take four awards as well. A Hard Day production team was undoubtedly pleased as the film performed strongly winning three awards including Best Director for Kim Seong-hun for only his sophomore attempt behind the camera. 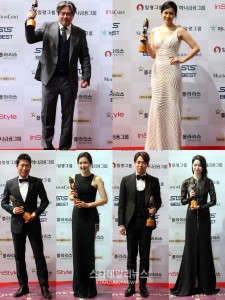 In the acting category, Choi Min-sik cemented himself as one of the best Korean actor of all time with an unprecedented fourth Grand Bell for Best Actor for his portrayal as Admiral Yi Sun-sin in the movie The Admiral: Roaring Currents. Keeping up with this year’s naval themed box office, The Pirate‘s lead actress Son Ye-jin managed to bag Grand Bell for Best Actress for her role. Her counterpart Yoo Hae-jin won the Best Supporting Actor while The Attorney actress Kim Ha-ae won Best Supporting Actress.

All in all, the 2014 Daejong Film Awards capped off for what has been a big year for the Korean movie industry: full of high quality movies and record smashing admissions at the cinema. (A full list of the winners can be found here.) Congratulations to all the winners!