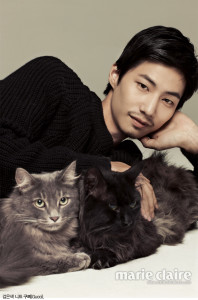 Although you probably know him from such dramas as The Moon Embraces The Sun, model-turned-actor Song Jae-rim is about to make his big debut in the variety show world. He’s been cast as half of the most recent couple addition to We Got Married, and it is a big change for him. He’s going from a career of manly acting roles and refined photo-shoots to candid humor and romance. I’ve talked before about how WGM can be a bit of an image-ruiner for idols, so hopefully that won’t be the case for him. This venture into the world of variety TV correlates with an upswing in his popularity as an actor, which comes after many years of being relegated to supporting roles.

He began his career as a runway and magazine model. His stunning bone structure, natural height and glorious hair guaranteed him a place in some of the most couture shows. He’s modeled for Herin Homme, Junn. J, Vogue and Arena Homme to name a few. However, looks don’t last forever, and so in 2009 he began his career as an actor. It’s a natural choice for a model to pursue a path in entertainment as a secondary –- and more lasting -– career, and Jae-rim’s good looks ensured he wouldn’t be passed over by entertainment companies. 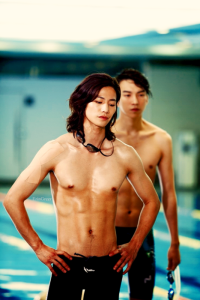 His first few acting roles were so minor that they barely warrant a mention. Like any up-and-coming actor he had to take what he could get. He played a “photographer’s assistant” in the unconventional film Actresses and a “club official” in the drama Daemul. These were generic roles, and although some people may have noticed him in the background, they certainly aren’t portrayals he is known for. His first named role was in 2010 in a film titled Grand Prix.

The role that made him appear on my radar was in Flower Boy Ramyun Shop in 2011. Once again, he wasn’t in a major role –- just a friend of one of the main characters –- yet he stood out. His quiet and angsty character was appealing in a haughty teenage-boy kind of way, but more importantly his dark, luscious locks stood out immediately –- that may sound shallow, but good hair goes a long way. I admit that I can’t remember anything his character actually said in the show, and he certainly didn’t become known for his role like co-star Park Minwoo did, but still this is my first memory of him. 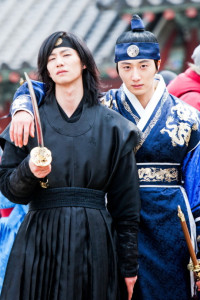 However, his next role did win him more public recognition. He played the loyal guard Chae Woon in the high-rated drama The Moon Embraces The Sun. This is a case of being in the right drama at the right time. People always talk about how important picking good roles is in the drama world and, although Jae-rim was probably just looking for any work available at the time, that concept holds true here. He got lucky in finding a role in a drama that did especially well with viewers, and it gave him more of a chance to become known to the public. Even without being the main character, he was recognized more than he ever had before.

Up until this point, he had been acting in about one drama a year and about one film a year. 2013 was the year when that all changed, and he acted in not only a film but three dramas. We can assume that this was partly -– if not totally -– due to his success in The Moon Embraces The Sun. The upswing in work was significant enough that it doesn’t seem random. Sadly, even though his roles increased in number, they did not increase in value. 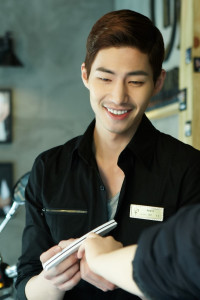 Unfortunately, out of the three dramas in which he acted, only in one was he a main character. Even more unfortunately, the drama was Nail Shop Paris, which was genuinely terrible. Song Jae-rim‘s character Kay was the only thing in that drama worth sticking around for, and he suffered as the “second lead.” In this case, Jae-Rim chose the wrong drama. He also played supporting characters in two action-suspense projects – film The Suspect and drama Two Weeks — and although they were both decently popular in ratings, they were also intense stories and fit a more niche market, so he did not get any public recognition boost as he did from The Moon Embraces The Sun.

Thankfully, 2014 has been a better year for Jae-rim. He’s already been a main character in a movie and a drama. The film, a horror flick titled The Tunnel, didn’t do much in terms of popularity for him, but the drama on the other hand seems to be having a positive effect. He is playing one of the main characters in the drama The Idle Mermaid (Surplus Princess) and finally he is becoming the talk of the internet. This kind of fun, romantic comedy is exactly what he needed to get his name out there. 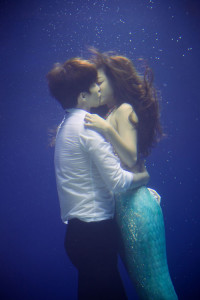 Yes, it is important to be able to pull off historical fiction and serious action roles, but the K-drama bread and butter is the romcom. The addictive nature of dramas like this is like a super catchy song for an idol group -– it may not be their most artistic work, but it certainly gets them more fans and more awards. As much as we sometimes hate to admit it, public appeal is hugely important when it comes to having a career in entertainment. It also helps that he has a super cute butt, which he showed off in the show, and his still amazing bone structure going for him.

While his career may still be in the taking-off stage, no matter how small the role, he always acts well and doesn’t fade into the background. His role in The Idle Mermaid may be his big chance to prove himself to the drama industry and secure a more regular spot as the leading actor in future projects. His role in WGM will also likely play a big part in how much his popularity grows in the upcoming years. As much as people complain about the show, there is no denying that WGM has played a big part in how the public views many celebrities.

The K-drama fan community is always looking for the next big male lead and I can easily see Song Jae-rim being it. He may not be as young and flower-faced as Seo Kang-Joon, but he has a charisma and masculinity that will allow him to play more serious lead roles. Personally, I’d love to see him in some more historical dramas, and, although his short hair is handsome, I’d love to see a return of the long hair. 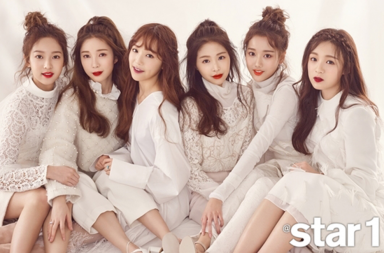