Moon That Embraces the Sun: Another great hit for Kim Soo-hyun

Our Editor in Chief, Amy, tried her best to convince me to watch the hit drama, The Moon That Embraces the Sun over dinner and dessert last Friday. She was clearly obsessed with it and wanted to spread the Moon/Sun addiction–and I’m thankful that she was persistent for I’m totally enamored with this drama!

In general, I don’t do saeguks, with the exception of Sungkyunkwan Scandal. What can I say, Song Joong-ki holds a special place in my heart. Despite the killer cast, I wasn’t particularly excited about Moon/Sun for it requires a certain level of attention (such as paying attention to the double meaning lines, the complex political situations, alignments, etc. etc.) that I don’t believe in dedicating to dramas period. However, after three episodes, I was hooked and wanted to see more. 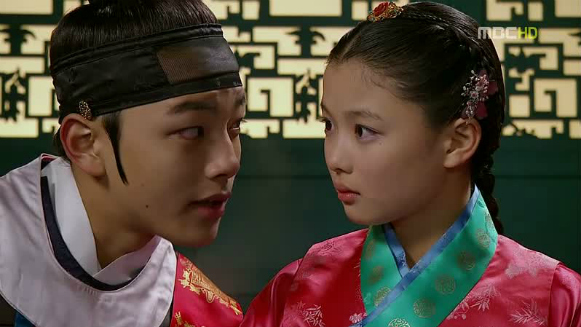 The plot is rather simple — two destined lovers, the Prince (Kim Soo-hyun/Yeo Jin-gu) and his love at first sight, Yeon-Woo (Han Ga-in/Kim You-Jung) have to go through all the trials and tribulations, caused by external forces before they live happily ever after.  In fact, the story is portrayed in such a simplistic way that it’s so easy to dislike the antagonists and love the protagonist.

The antagonists or characters who create all the unnecessary conflict include Queen Yoon (Kim Young-ae), politician Yoon Dae-hyung (Kim Eung-soo), princess Yoon Bo-kyung (Kim Min-seo). And because their biggest motivation for malicious actions are greed for power and wealth, it’s rather easy to dislike them without a hint of guilt. In fact, it’s not that hard to dislike Queen Yoon who puts her family’s power in front of her love for her grandchildren. And did anybody else think that it was twisted for her to use her grandchild’s love for Heo Yeom (Song Jae-hee) to get rid of Yeon-Woo? This Queen has no boundaries whatsoever. As for Princess Yoon, I knew she was trouble when she devised the situation to make her maid accuse Yeon-Woo’s maid, Sul, that she stole her wallet, only to weasel her way out of the situation later on by blaming her maid. Like father, like daughter. 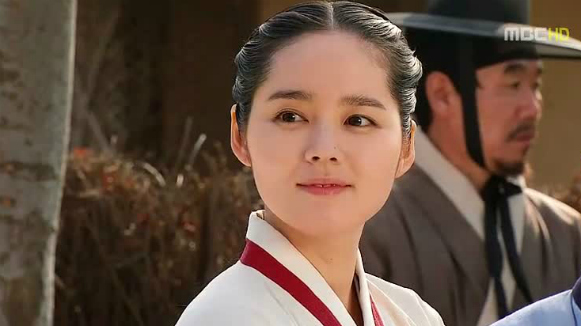 Similarly, the protagonists are rather easy for us to fall in love with. For example, how can we not fall in love with Yeon-woo, who’s pretty, loves to read, and has the heart of Mother Teresa? And I can’t help but to notice and appreciate that female leads from both Moon/Sun and Sungkyunkwan are bookworms. Perhaps the author of both novels are trying to make a point here. 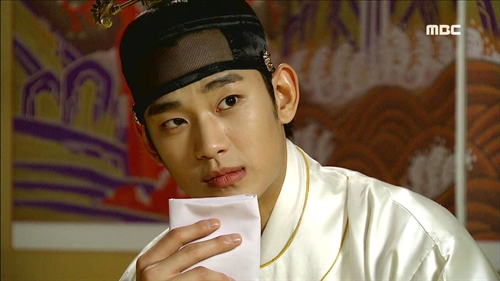 And how about Prince Hwon who tries to run away from home to meet his step brother because he misses him so much and does everything in his power to make sure that Yeon-Woo has a fair chance of marrying him? Although Prince Hwon transformed into a bitter, but pragmatic character as the drama progressed, the viewers can immediately relate to and witness the pain he’s still suffering because he still misses Yeon-Woo. But let’s be honest here — how can you hate a character played by Kim Soo-hyun? My appreciation for Kim Soo-hyun was non-existent during Dream High. Not sure what it was, but I just didn’t gravitate towards him but half way into Moon/Sun, I’m battling Amy to win the label of “Kim Soo-hyun Biased” within the team. 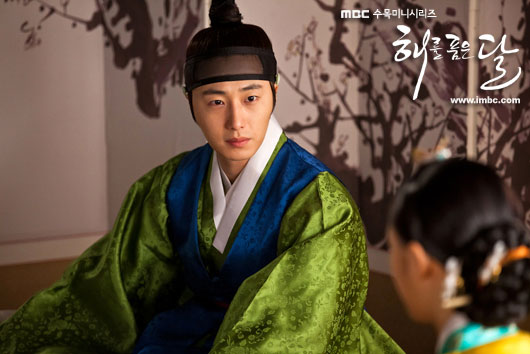 Prince Yang-myung (Jung Il-woo) is another character that you can’t help but to feel sorry for. He wasn’t able to get the throne nor the girl, yet he doesn’t hold a grudge towards his brother and tries his best to just live without getting too involved in the politics that seem to plague Prince Hwon. 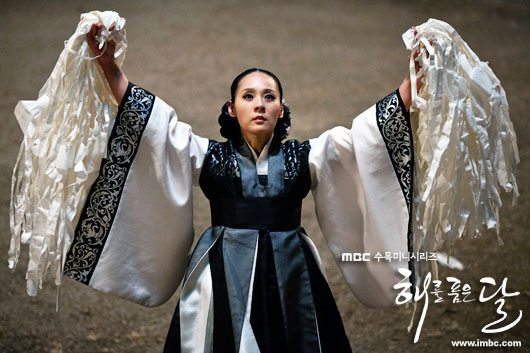 I have mixed feelings for Princess Min-hwa, for she worked with Queen Yoon to wed her first love and Yeon-Woo’s brother, Heo Yeom. But it doesn’t bother me as much, for her airtime is limited and her fruitless efforts of trying to get into the same bed with her husband is rather comical. However, I’m curious to see how Heo Yeom and his mom would react once they find out the truth behind Yeon-Woo’s fake death. Similarly, my feelings for the shaman, Jang Nok-young (Jeon Mi-seon) are mixed, but mostly because I have a hard time reading this lady. I know that she will stand by Yeon-Woo no matter what, but she engages in devious acts (did anybody else think that the fake death scenario was twisted?) so that I can’t fully love or hate her. 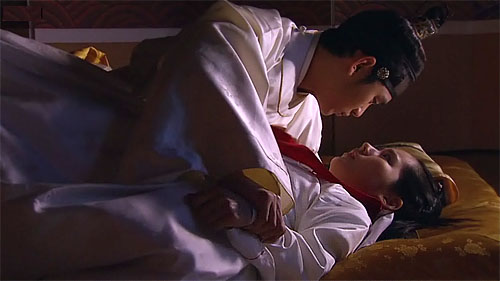 Although the characters are mostly one-dimensional, the drama does a good job of drawing you in. I sobbed when the lovers were split and I’m anxiously anticipating the scene when Yeon-Woo realizes who she is in the episodes to come. Additionally, the production value of this drama just makes the viewing experience so much more enjoyable. The hanboks, the scenery, and of course the pretty cast all contributed to making this drama a huge hit. The ratings are on the rise and the anticipation for this drama is very high. My only complaint is that despite Han Ga-in’s looks, her acting is mediocre and among such a great cast, it’s becoming more evident by the day. She either needs to step it up or simply pick dramas more suited to her skill set next time.

And I can’t believe that I’m saying this, but in comparison to Kim Soo-hyun, Jung Il-woo looks like he’s falling short on the looks department. I’d say that he just needs to make sure that he either plays the male lead or his co-stars need to be not as hot and good as Kim Soo-hyun.

Are you addicted to Moon/Sun and/or Kim Soo-hyun as much as I am?