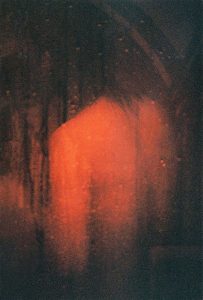 The first part of this article addressed the details of Sulli‘s nude scene in Real and the reactions to it from both the Korean public and the film industry, acknowledging it as possibly the latest manifestation of a recent trend of rookie actresses going nude and garnering almost immediate success. Continuing where I left off, I will now address the first question I mentioned in the closing of the previous installment: why does nudity appear to be such a regular commodity in Korean films?

Having said that, finding the answer involves taking a walk through the history of the nude in Korean art forms.

After the 1960’s, nude art in Korea began to take on its own form. Artists began experimenting with the naked body in their works, keeping within the tradition of emphasis on the female form but playing around with settings and moods. Although Korean society at large was still wary of nudity in art, artists pushed the boundaries of artistic expression in regards to nudity, which one could theorize spilled into Korean cinema in its beginnings to its current state as well. 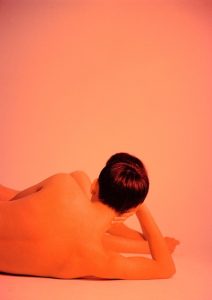 Much like the Europeans in the Medieval era, Christianity held a strong grip on general Korean society. Nudity is viewed largely negatively in Christianity, stemming from its association with sin in Adam and Eve’s biblical parable. For instance, in the rare occasions where nude figures would appear in art during the Middle Ages — where the power of the Christian Church was at its peak; themes of weakness and sin were frequently emphasized, rather than the more traditional Greco-Roman idealization of nudity.

Therefore, it made sense that the general Korean public was still wary of nudity in art. Even as a new artists’ group asked for nude models in the 1980s, the artists were misconstrued as perverts. Going as far as into the early 2000s, a low budget art film called Mago was able to make the news headlines for featuring 200 nude amateur actors. In the same time-frame, an actress allegedly committed suicide over having to perform a nude scene.

However, there was a difference in the frequency in which nudity appeared in films and art during this time period. Back during the early 2000s, nudity was still a rarity in films. Meanwhile, artists and photographers had been unabashedly exhibiting nudity without much uproar from others in the art community in that era and before; some artists even being lauded for well-done uses of nudity. Now in recent years — possibly because filmmakers decided to follow the lead of the art community — nudity is relatively commonplace in cinema. In fact, a lot of rookie actresses seem to even view their nude scenes as a rite of passage of sorts in their career; the actress Eom Ji-won, for instance, expressing how her nude scene in Tale of Cinema allowed her to open up her acting boundaries:

I think of nude scenes as a crucial passage to become a real actress. After stripping in front of the camera, I felt that I could now take any role.

This mindset possibly extends to the directors as well — causing them to view actresses who go nude as more capable and skilled, which could explain why these actresses often become more admired within the cinema world. Sim Young-eun, a curator from an art gallery in Seoul, sums up this recent attitude among artists of all kind quite succinctly:

Nudity is not so shocking. 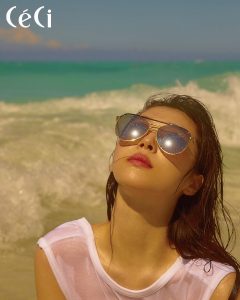 But he only meant this for those within the Korean art world, and not for those outside of it. To put it in broader terms, nudity presently appears to be a commonality in Korean art, of which also includes the film industry. Nonetheless, this receptiveness to — and in some cases, admiration of — nudity doesn’t extend to the general Korean public. Christians still remain the small but vocal minority; conservative Confucian rhetoric still governs the basis of a lot of people’s attitudes. Thus, there will inevitably be some dissidents against nudity in art forms. This is why nudity in films and art still makes the headlines, demonstrated in the case of Real, and other movies with nude scenes like Eungyo and The Concubine.

Subsequently, this highlights the discrepancy between public opinion and the attitudes of those within the film and art industries; adding context as for why Sulli became more eminent within the world of Korean cinema after her nude scene, even as the general public seemed unwavering (and perhaps increasingly vociferous) in their negative opinion of her.

Finally, all initial questions aside, we can get to the crux of the argument, also briefly mentioned in the first part of this article: is this trend of female nudity an issue? The answer varies depending on whether you ask the government, the director, feminists, or the actress.

From the director’s standpoint, there is certainly reason to consider usage of female nudity in films as a kind of sexploitation. After all, as previously explained, the general Korean public isn’t as desensitized to nudity as those in the film and art world. This means that announcing nude scenes of any sort can still shock the public, making for excellent press. This is particularly evident in the case of Real, where the announcement of the nude scene clearly was a good move for marketing, attracting attention from people and prompting them to see the movie — even if they come only to see Sulli’s naked body. The resulting leakage of the footage made news headlines once more, attracting even more attention to the film. 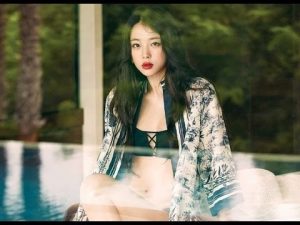 Noting this, it may seem as if filmmakers constantly exploit females, using their nude scenes to generate publicity for their works. Nevertheless, while this certainly seems to be the case in the previous example, it isn’t so clear-cut in other instances.

Park Chan-wook‘s The Handmaiden did attract a substantial amount of media frenzy over its nude scenes, but one could contend that these scenes are essential to further the themes of female sexuality that serve to criticize the male domineering of female desires. However, on the other hand, the scenes leaning more towards the pornographic side can be interpreted as detracting from this purpose, pandering to the male sexual desires rather than properly conveying female ones. If one chooses to construe the scenes in this manner, then perhaps they would conclude that sexploitation is ever-present even in this seemingly progressive film.

Moving onto the next perspective to analyze, the government doesn’t seem to mind nudity in professional Korean cinema all that much. There has been considerable censorship on films criticizing the government, but no such restrictions are placed on commercial films exhibiting nudity. This may come as a surprise, considering South Korea’s strict laws on pornography; banning many sites and putting in place strict age regulations for those sites that are permitted. 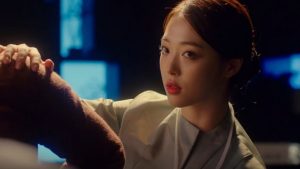 One reason why nudity is deemed acceptable by the government, and pornography is not, is the difference in their intent. Although the creators’ purposes for including nudity might be dubious, the contention could be made that the nudity was necessary for the sake of art. Meanwhile, with pornography, the intent of the nudity is seen as quite transparent: to titillate. After all, the government frequently cites pornography as a cause of “indecent sexual expression” — of which is connected to the sexual desires that porn deliberately stirs up. To the government, this shaky threshold between pornography and commercial film is what appears to define the spectrum between the obscene and the artistic. 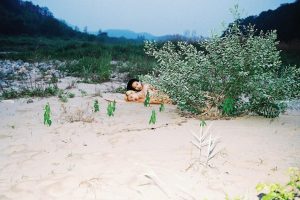 Conversely, feminists may regard this trend as a problem. In a similar vein, there was a controversy regarding a painting of a naked Park Geun-hye during her administration. There was considerable outrage over it, from Park Geun-hye supporters as well as others. Female legislators castigated the painting for “sexually objectifying” women.

These criticisms were largely connected to the other part of the controversy: that males were rarely ridiculed in a similar fashion in Korean society; proven by online commentators not choosing to attack the male politician who held the art exhibit displaying the painting, but instead targeting his wife and daughters.

How does this relate to nudity in films? In such an environment where females have a long way to go until reaching entirely equal status with males, the argument could be made that artists should take this into consideration and be careful in how they represent females in art. Therefore, it could be asserted that an overemphasis on female nudity in film — or any kind of art, for that matter — would be in poor taste, possibly degrading women as sexual objects.

However, there is something to consider: while the feminist concerns are valid, the nudity in the particular case of the Park Geun-hye controversy could be seen as an essential part of the painting’s satirical nature, drawing a relevant parallel to Manet‘s Olympia painting. This, again, shows that there are many complexities within the discussion worth poring over. 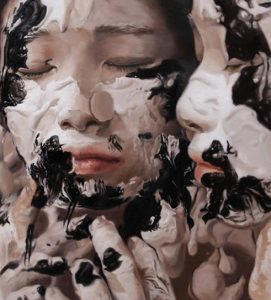 Furthermore, another thing to note here is the prevalence of the female nude in art history. Western art emphasized female nudity, which likely carried over into the Korean scene, as reiterated previously. A lot of modern photographers and artists seem to have a tendency to focus on the naked female body, possibly for artistic reasons. Using this line of thinking, the focus on female nudity in films may not be a result of purposeful sexual objectification of women, but rather an inconsequential byproduct of an artistic custom already present in the art realm.

Finally, the last perspective we should consider is that of the actress. A lot of the times, it could be the case that the actress seems pleased about having done a nude scene — for instance, Eom Ji-won, mentioned previously. Another example would be Sulli, who sounds as if she has no regrets with her scene either:

I don’t think it was easy. It was a huge challenge for me, acting-wise and in other areas. It was hard and I had a lot of concerns but it was fun.

In such instances where the actress appears satisfied with her scene and entirely unforced to do it, perhaps it cannot be considered exploitation despite any initial intentions of the director. But of course, this isn’t always the case. Actresses are also frequently goaded into doing nude scenes that they are hesitant about. Case in point with the House With a Nice View lawsuit; the litigator being an actress in the film who admitted that she did her nude scene as a result of the director’s instigation. This goes to show that the boundaries between coercion and personal choice regarding nude scenes are oftentimes blurred, making it hard to tell whether the actress took the scene on willingly or by the director’s will. 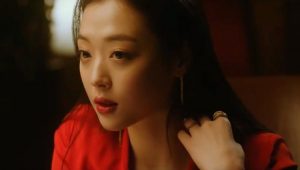 There are no definite black and white guidelines discerning sexploitation, obscenity, and art when it comes to nudity in films. In the end, the matter is extremely subjective, and the answer turns out to be different depending on whom you ask.

Kang Hyun-il, the director of the previously mentioned Mago said this:

Is the movie obscenity or art? It depends on the artist’s conscience.

From an artist’s perspective, this could be a pretty a solid answer to the question of art versus obscenity. For others, the answer may be much more nuanced than this. However, entertaining that line of thinking: if it was the intent of the creators of Real to use nudity to spark discussion, then their success at it (this article serving as proof) perhaps makes its usage in the film art.