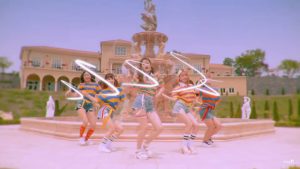 The debut duo Lime Soda on Dmaker Entertainment finds a dynamic, yet simple release song in “Z Z Z.” Hyerim, a former JYP Entertainment trainee and contestant on K-Pop Star and her musical partner Seungji find happiness in their debut with the help of a feature from MC Gree.  While catchy and cute, the group manages to capture many of the popular girl group images though the visual quality of the video is lacking.

The song begins with what sounds like a recorder, an instrument popular in elementary schools. The two girls are waking up from a fresh night of sleep before falling into the dream world of a European mansion with a massive fountain. Throughout the rest of the video, the two girls flash between their dream world and the reality of an average day.

The group even managed to find MC Gree to drop a rap after the girls provide somewhat of a mini breakdown. At first, it’s an odd rap. MC Gree kind of mumbles through the first half as the girls traverse some kind of fair with rides and rope courses.  While it manages to follow the musical melodies and provide a new layer to the song that wasn’t there before, it’s both a low moment and only kind of average. It would have been fun to see if either of the girls could drop a few bars, but the MC Gree feature worked as intended.

The video and song combine to promote sleep and the beauty that sleep provides. From elaborate and luxurious lands all the way to clear and nice skin. It’s a simple premise and the lyrics to the song reflect that simplicity.

When spring comes, it is easy Z Z Z
Exhausted in the heat in summer Z Z Z
When it comes to autumn, Z Z Z
Hibernate with the bear in winter

The video hits nearly every girl group cliche that we’ve seen in the past few years. There’s a scene with the girls singing with a curling iron and a blow dryer; another where they lay in bed and sit up the same time, mouths agape. There’s even the casual sit-across-the-table-looking-at-each-other-and-when-the-camera-pans-out-look-at-the-camera move. The girls don’t avoid any girl group staple, including the classic fruit eating.

Despite not being the most original video, the members manage to use a really fun song, though not wig-snatching catchy. The pre-chorus is upbeat and memorable. It’s also easily singable for English and Korean speakers. It’s as simple as repeating the “Z Z Z” part over and over again until it lulls you to sleep. 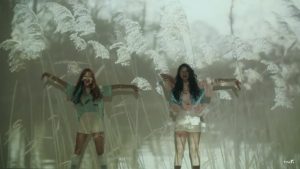 With an obviously low budget, the group still manages to swing some memorable scenes. Such as the hipster dancing shots in front a projector. Or even the alternative reality that somewhat resembles that from Red Velvet’s “Dumb Dumb.”  But there was a limited budget to swing some of the cool effects and scene structure.

For example, the house with colored stairs at one point in the video is obviously created digitally. In bigger girl groups (think Oh My Girl or WJSN), these stairs would seem more like an actual feature of their environment and would burst with color. There is also a weird red tint on the video dulling much of the colors. While most girl groups tend to use bright scenes with bright colors; Lime Soda’s video just looks terribly dull and somewhat red. Looking at this video, then watching something more colorful like WJSN’s “Happy” is like putting on glasses for the first time. The world is just so different. This is where the obvious budget differences between a larger company and a debut group from a smaller company lies.

In conclusion, Lime Soda has some potential. Both Hyerim and Seungji have obvious talent as vocalists and dancers. Now it’s up to them and their agency to push them onto shows and into the public eye. Lime Soda has something they can share, a bubbly summer single. Now it’s all about publicizing it. Hopefully, they can get there because it’s a refreshing summer hit. Plus, Lime Soda is a fantastic name for a girl group.