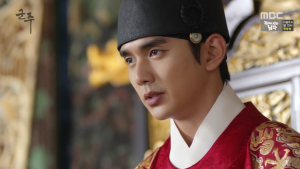 The finale of Ruler: Master of the Mask has aired and everything has been neatly wrapped up with a bow. The past 40 episodes have put us through a roller coaster of emotions from dread and apprehension to anxiety and even heartbreak. With the amount of time and emotional investment made into the series, the expectations for the finale were high yet everything about the ending was just so convenient that the overall effect was completely underwhelming.

Throughout the series we were being led to think that there would be a huge confrontation on two fronts: the Crown Prince versus the Pyeonsoo-hwe and the resolution of the love triangle. While both these things came to an expected end, their execution was lackluster, especially in terms of the fates of two of the most important characters to the series, Dae Mok and Lee Seon.

Dae Mok has been the Big Bad looming over us the whole season. If it weren’t for him and his scheming ways we wouldn’t even have a story, so much of the action is attributable to him. A villain for the ages, Dae Mok was set up as unbeatable. His granddaughter gave her life to help bring him down and he yet he was still able to turn that situation into a positive for him. Even with the king’s guard surrounding his house, he continued to plot the king’s downfall and his own comeuppance through another puppet. He used his few loyal men to ensure that every last action was possibly taken before he admitted defeat. 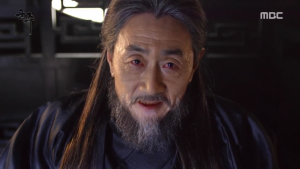 Nothing about Dae Mok’s end, however, was fitting to the character we’d become familiar with over the course of so many episodes and in-show years. Dae Mok was a consummate fighter, with plan A-Z and even more backups. He used wit and force together to get what he wanted, to show his might and power over those who opposed him. Yet when he faced the Crown Prince, now King, for the last time, he was reduced to a sad old man. He has essentially given up and listens to his enemy’s speech without retort as he would normally. Even his form of death–poison–seemed out of character. Everything about Dae Mok was about showing strength. Instead of facing his fate head on, he cut off his own life unnecessarily. By killing himself, Dae Mok gave up his chance at renewing his power or even reconciling with his son, who’d bargained for his life, and settled instead for ending things alone and powerless. For a villain that was so doggedly after our main character, his death without any punishment or even sense of remorse felt lacking.

With Lee Seon, his entire character arc felt like a waste a time. He went from a poor boy with a crush on a rich girl, to a puppet king, to a puppet king with a power complex, back to a poor boy with a crush. He didn’t learn anything. He almost became so obsessed with power that he very nearly turned into a second Dae Mok. Through the magic of friendship between himself and the King Lee Seon, he was able to reconcile in his heart that he was not meant to be King and have all those things he coveted. The drama refused to let Lee Seon just live as a pauper again, even though he had a place to be now. Instead he was sacrificed to save Ga Eun’s life, echoing Hwa Goon’s sacrifice. As talked about before, Hwa Goon sacrificed her life to help the then Crown Prince, smiling as she died while thinking of their first meeting. Similarly, Lee Seon died smiling in the arms of the woman he loved and holding the hand of his one true friend. 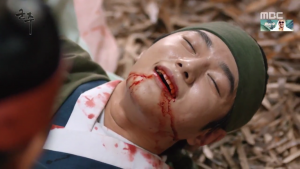 Just how Dae Mok’s death felt like “oh, the bad guy is dead because the story is over,” so did Lee Seon’s death feel like a throw away. There was no reason to kill him off. His life had already been spared by King Lee Seon as a favor. Lee Seon and Ga Eun had made peace with the relationship they were going to have moving forward. KKol Mool and his mother were waiting for Lee Seon to come home. It was expected for him to live a quiet life, watching his two friends from afar, but for some reason the writer saw fit that the only way to tie up all of the Pyeonsoo-hwe’s loose ends was to also kill off the third side of the love triangle. Lee Seon’s death happened in such a way that it didn’t elicit shock or even sorrow. There was no sympathy for his grieving friends either. They cried, but they showed more emotion during other deaths in the series. It was an action that happened seemingly because there was nothing else to do with the character, which was a waste.

There was potential for the Lee Seons to go forward working together, using the king’s experiences as the Chief Peddler and Lee Seon’s poor upbringing as basis for policies to help the poor and working classes, improve education, and more. The king spent the majority of the drama talking about his love for the people, yet most of his “love” was shown towards people in the palace when it all came down to it. He saved the children from the Pyeonsoo-hwe’s fields, but that served more purpose in helping him deliver a blow to Dae Mok than it did in setting a precedent for his rule. In fact, the King does not show the growth expected at all by the end of the drama.

King Lee Seon and Crown Prince Lee Seon are essentially the same person in different clothes. And by this I mean we have seen no character development. As the Crown Prince Lee Seon, our main character was decidedly rash, making decisions without having the full information, letting his frustration cloud his judgment, and risking his life and throne over Ga Eun. At the end of the drama we see him still doing these same things. His overwhelming desire to have Ga Eun as his wife leads him to threaten to throw away his crown because the ministers advise him that this would be an unwise decision as she was chosen as the fake king’s wife. This is sound advice for a new king, with the ancient laws to prove it, yet he’s so set on it he’s willing to throw away everything he’s worked for over this entire course. Then, when he’s advised to kill Lee Seon, he again ignores the advice of his elders and spares him, citing a technicality. The King Lee Seon has a bit more authority to back up his whims, but he’s still doing the things he feels are right versus what needs to be done for the kingdom. 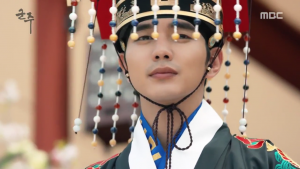 Furthermore, nothing about becoming king and ruling Joseon feels particularly earned by the Crown Prince in the end. We’ve gone through all these dangerous situations before the finale, but it was through the efforts of everyone else that the Crown Prince became king. It was Hwa Goon who dealt the killing blow to the Pyeonsoo-hwe. It was Ga Eun who found the essential piece of evidence to prove his identity. It was Moo Ha and the others who risked their lives to divert attention so he could sneak into the palace. For literally years, Lee Seon was a place holder until the Crown Prince was prepared. Even Dae Mok gave up and removed himself. The hardest thing the Crown Prince had to do throughout the series was stay focused on his goal and he ended up with the crown and the woman.

The King’s visions at the end of the coronation were supposed to signify how far he’d come, by giving his last regards to the people who’d lost their lives to help him regain his throne. His short thank yous and goodbyes to Magistrate Han, Hwa Goon, and Lee Seon didn’t really encompass how much they really sacrificed in order for him to get there. Surprisingly, no vision of his father or mother appeared. Seeing how he righted the wrongs of his father and finally fulfilled his birth prophecy, there was some expectation that he would want to see his father during this crowning achievement. 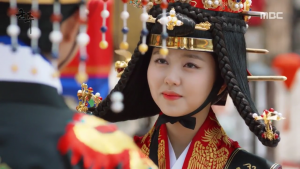 In the end, all of our female characters were also greatly reduced. Mae Chang was a pro at espionage, could handle herself with a sword, and was beautiful to boot, and our last glimpse of her is as a maid at Ga Eun’s coronation. Hwa Goon was one of the strongest female characters of the series and she was killed off episodes ago in order to further the story. The former Queen went from the most powerful woman in the palace, to powerless and discarded, to quietly sitting off to the side as she watched another woman take her place. And Ga Eun? She became the new Queen, the mother of the nation, but that role had been decided for her so long ago it wasn’t as if she was stepping into a role of power. She was simply, as usual, filling the role that had been assigned to her.

Ruler: Master of the Mask had high points and low points. The story was interesting and while it relied on several tropes, it managed to keep viewers engaged for 40 episodes. However, the acting at points was mediocre, which is surprising due to the all-star cast. What should have been a stellar ending to a show with great ratings was sadly only a few loose ends tied up in a pretty bow in order to create the expected happy ending for the main couple. Joseon, however, is left with a king who loves his queen and his people, and so it will hopefully be prosperous until the next drama begins.