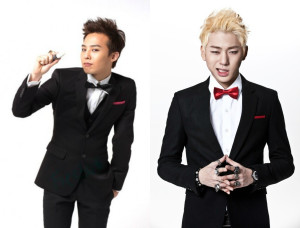 Ever get the feeling that this idol just doesn’t belong on this group? Ever wanted to swap him/her out for another idol from another group that would work so much better? Given that we are living in a time of uproar and chaos among dissatisfied idols who are no longer willing to play ball, choosing instead to leave a group and/or make statements counter to the company line, perhaps having them switch groups (and companies) may keep them satisfied.

Which idols should be placed in another group? What would it look like if this actually happened?

Andy: Can we swap out Minho and replace him with Amber in SHINee? She has the skills and the looks to effectively replace Minho, and probably do a better job in the position, too. I can just imagine the battle of androgyny between her and Taemin. Or fighting with Key about who has the bigger attitude. Additionally, with her lower voice, SHINee would have another vocalist to add to the group.

Laverne: I think it would be interesting to swap Zico and G-Dragon as Zico would bring a breath of fresh air to Big Bang. He’s proven to be a talented composer and doesn’t limit himself to one genre. Zico seems like he’d fit in with the other members and I’d love to see what he could do with even greater financial backing.Plus with him, we would be sure to get a new Big Bang album; I bet he wouldn’t let YG delay his music.

And just for funsies, why not swap Hongki and Yonghwa? Although both CN Blue and FT Island are bands, they have different styles and I’m curious how each singer would adapt.

Gaya: Amber may be a better dancer, but she is no rap god. 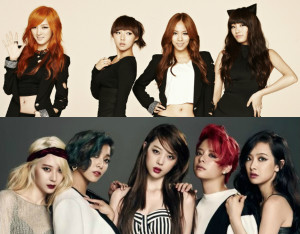 Something I would like to see happen is Luna swapped with Min in Miss A. Nothing against Min, it’s just that it’d be neater to swap one Korean out with another. Miss A has, arguably, even less promotional activities as a group than f(x), but when they do promote, oh man… Luna will be able to bring up the vocal quality of Miss A, and still be able to keep up with the choreography. Miss A’s stronger stage presence and performance rigour will also benefit Luna; it’s a win-win situation!

Kelsey: Why not switch Luna for Suzy instead? Min’s street style and more soulful voice don’t quite fit for f(x) but Suzy could match the group well. The combo of Min, Luna, Fei, and Jia would be nothing short of a dream group for me.

Gaya: But Miss A needs Suzy for youth and visual appeal! f(x) already has Krystal… and Sulli…? Though I can understand your worries about the vocal match-up. My reasoning is that the autotuning f(x) gets will help Min’s voice assimilate into the group’s sound better.

And while we’re looking at the other side of the swap: can you imagine G-Dragon with the rest of Block B?

Lo: Hyorin and Raina. Hyorin can handle the sexy vibe of After School, and give them a much needed boost in the vocals category, while Raina and Soyou sharing main vocal duties would be amazing. Dasom may even get lines!

Andy: Yes, Amber isn’t a rap god. Neither is Minho, so it’s not like SHINee would lose anything.

I think the Hongki-Yonghwa switch would be rather awkward. CN Blue and FT Island are pretty different: 4 vs 5 members, pop-rock vs. rock/pop-rock, etc. I don’t think Yonghwa has the vocal type to be able to fit in with FT Island’s style of music. He lacks that very rocker oomph. Additionally, since both bands have two guitarists, unless Hongki’s hiding some guitar skills, FT Island’s Seunghyun would have to be stolen by CN Blue, as well. Otherwise, the entire sound of CN Blue would change into something much more thin.

As to GD-Zico switch, just the thought is making me laugh. Talk about personality differences (from what they show us anyway). 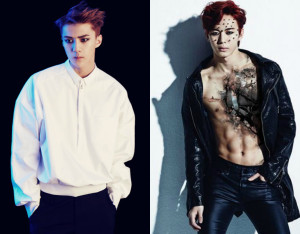 Laverne: Good point on Hongki-Yonghwa. Instead, let me make another proposition: Sehun and Hongbin. Exo and Vixx are friends so the transition would be smooth for both. Hongbin’s got good looks, a nice body, and has greatly improved his singing and rapping — he’d fit in with Exo. Sehun could pull off the dark concepts of Vixx and fits in height-wise so their choreography wouldn’t be disturbed.

Andy: The Sehun-Hongbin switch is interesting. Sehun does have that “darker” air about him as a performer, so he’d fit in with the concepts. Sehun’s one of the better dancers in EXO (right?), so it wouldn’t be hard for him to pick up the VIXX choreography and do a bang-up job.

Joyce: Don’t know if it’s just me, but I feel like Jin and Daesung both stick out like sore thumbs in BTS and Big Bang, respectively. Both of them don’t really suit the image of their group, and might do better in a group that skews more ballady. I think Daesung could join 2am, and Jo Kwon can fulfil his dream in Miss A(m). He would pretty much outshine everyone there. As for Jin, he could probably suit a group that’s utilizes his voice and harmony more, maybe Lunafly, if they are considered idols?

And I pretty much want to split U-Kiss and ZE:A up and tag them to more popular groups, because those poor babies definitely deserve it. We can have many successful Super Junior-sized groups floating around, co-existing happily. Or maybe they could all join Super Junior.