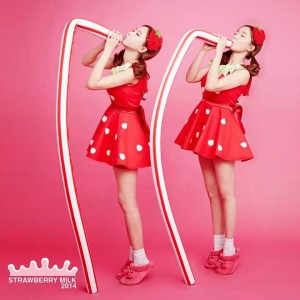 Following Crayon Pop‘s dynamic breakthrough last year, it’s not surprising to see the quintet breaking out into new territories to in order to capitalize on their success. The first sub-unit, Strawberry Milk, is composed of twin members Choa and Way. Straight from the get-go their self-titled debut EP promised to be quirky, cute, and very, very pink. Uh, Chrome Entertainment, you do realize sub-units are supposed to be different from the main group, right?

The EP opens with title track “OK”. There’s not a lot to say about it, either positive or negative, except that it sounds like an anime opening, which can be taken either way. The best word for it is probably “inoffensive”. It’s extremely peppy and upbeat, as if a cheerleader had one too many Red Bulls before the big pep rally. The lyrics are a bit odd– Choa and Way seem to be holding out for the most mediocre relationship ever known. Seriously, their main standard for a guy is that he be “okay”. Of course, the peppy tune makes meaningful lyrics impossible, so no harm, no foul on that count. The biggest flaw is that it’s not memorable. You hear it, you bob your head, and the second it ends, you forget you heard it at all.

Unlike “OK” which starts with all the subtlety of a jackhammer, “Feel So Good” eases its way into the song. It opens with a warm, almost gooey guitar before being joined by a piano and horns, which are the nectar of pop music. “Feel So Good” lets Choa and Way’s voices shine in ways that Crayon Pop’s music rarely does. They sound warm and pleasant, melding wonderfully with the instrumentals. The whole song has this old-fashioned sound that makes you want to go frolic in the sun.

“Hello” is a song best described as pleasant. Choa and Way sound marvelous. The slower beat lets them really strech the notes, giving the vocals a richness and depth that is not present in their other songs. It’s just so refreshing to hear these two women sound their age for once. And as pleasant as “Hello” is, there is one strike against it: it sounds like an OST. A really nice OST, but still an OST. It is possible to get creative with the ballads, you know.

And no sooner did that thought enter my head did it get proven true. The final track, “Let Me Know”, is also a ballad but a much more interesting one, musically speaking. It was actually composed by Way, who had previously belonged to indie band N.Dolphin. Piano, chimes, and guitar are all used to great effect, creating a wibbly-wobbly, borderline-hypnotic feeling in the listener. It’s also the most personal song on the mini. Here, Choa and Way are not seeking love, but reassurance. They want to be told that they’re doing the right thing with their lives, that they made the right choices. Considering the roulette table that is the idol industry, it’s both understandable and vulnerable. 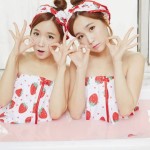 Strawberry Milk: The First EP is surprisingly mature. I was expecting an EP full of songs like “OK”, all bright colors and pep, with little substance. Instead, I got what I wanted: an EP with a different sound than Crayon Pop and K-pop. I just wish that the title track matched the rest of the EP.