Epik High To Return With 'Shoebox' 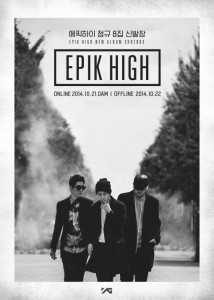 Well, SM may have skimped on their offerings for 2014 with all the scandals, but YG clearly didn’t. The hip-hop masters are returning!

Epik High has announced that they’ll be releasing their next album digitally on October 21 — the physical version going on sale on the 22nd. Entitled Shoebox, this will be the trio’s second album under YG Entertainment and their eighth overall.

It’s been close to two years, more than that by the time Shoebox actually drops, since Epik High’s last album, 99. While 99 was fairly upbeat and optimistic, Shoebox‘s teasers paint it as a more somber album. Either way, you know it’s gonna be good. When is Epik High not?

How excited are you, readers?