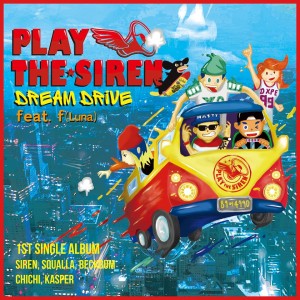 Following the announcement of SM Entertainment‘s investment in indie label Baljunso, the first artist to hit the scene is Play the Siren. A five member co-ed group, Play the Siren is a self-described “urban music” group. While the group’s focus is hip hop and R&B, they work to combine different genres.

Their pre-debut videos may lead many to expect a group with a strong hip hop vibe, but “Dream Drive,” their debut release, strangely presents a disconnect. The title suggests that the song is about the unwillingness to wake up from big dreams and that’s fine, but there are glaring issues with the song’s composition and its MV.

In their pre-debut days, Play the Siren was more ‘hip hop’ than “Dream Drive” would lead you to believe. Although their music did contain a lot of electronic sounds, there was a distinct hip hop element to their work. It’s apparent that Play the Siren has overcompensated for a wider audience.

First off, their rapping has slowed down significantly. From their videos released on YouTube, with the exception of Kasper, the members have shown their skills in rapping. In the case of “Dream Drive”, the singers haven’t promoted it well or utilized it at all — leader Siren doesn’t even have lines for the song.

From a PR stand point, Luna‘s featuring in the song is an excellent move. As a member of f(x), she’s recognizable in terms of looks and vocals. However, her inclusion leaves a bit to be desired. That’s not to say that Luna hasn’t done a good job – this is Luna the powerhouse we’re talking about — but it’s obvious that she’s more suited to pop. The vocal range in “Dream Drive” seems higher than is needed for the appropriate impact of an “urban” track, and this non-hip hop-sounding song actually resembles the pop that Luna would be familiar with. The f(x) songstress isn’t exactly in her comfort zone for “Dream Drive,” but she still manages to shine — it appears to be Luna featuring Play the Sire, instead of the other way around. Luna gets more screen time and lines than the group.

“Dream Drive” doesn’t scream “urban music.” As mentioned above, it’s more in the vein of f(x)’s sound, but with less singing in the verses. In its favor, the track does have a beat that would work great in a club. Any song that discusses embracing the world is bound to get people moving, even if it isn’t stellar.

Instead of a dream drive, the MV comes off as Siren mildly hallucinating off some mediocre narcotics. There is such a lack of detail that it hardly seems like a dream. Even daydreams have more detail than this MV. Clearly, the concept behind the MV is that the guy is dreaming this whole thing, but wow, his dreams are pretty dang lame.

Except for psychedelic colors and retro solo shots, the MV is just a mash of disappointing green screen effects. They could’ve gone full out with the dream, and have Luna engage with the audience more — her stagnant sequences come of stale and dull. Or better yet, throw in Play the SIren and have them all share the experience of a dream drive? Isn’t that the title of the song?

A small consolation is the little bit of comedy at the end. Siren getting happy about a hot girl card was humorous and a little edgier than 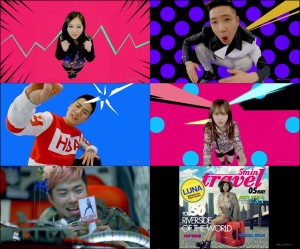 you’d expect from a SME-related MV. You’d think that maybe he’s on to fulfilling another sort of dream.

Finally, there’s one big question left by the MV: Who’s the sixth guy doing the DJ-ing?

Despite Baljunso’s insistence that the musical color would not change for their indie artists, I can’t help but feel that it has happened with Play the Siren. Yes, the purpose of the merger with SM Entertainment is to expand the exposure of indie artists and make it easier for them to produce their music. However, this shouldn’t mean that their title tracks should take on more mainstream stylistics.

“Dream Drive” isn’t a bad song, but it isn’t great either. If not for Luna’s part — which will continue to provide traction for Play the Siren — the song would be quite forgettable.

What are your thoughts on “Dream Drive?” Leave a comment below!