Sistar Supplies Songs for the Summer with "Touch & Move" 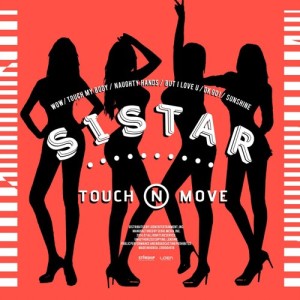 If you’re inclined toward happiness and fun, summer in the K-pop world must be the best time for you: upbeat singles with intensely colored music videos — asking you to enjoy life — abound. And if you’re especially lucky, a company might even decide to release a whole summery album for a single group.

This must have happened over at Starship Entertainment. Sistar‘s new mini album Touch & Move is filled with songs that want to be listened to while the listener is lying in the sun, or otherwise enjoying the warm weather.

The album opens with “Wow“, which is regrettably just a short intro song. The laid-back rhythm and the occasional guitar sounds are a nice way of easing the listener into the album. For someone who’s not from the region, the percussions used seem to evoke a vaguely Caribbean sound (please correct me if I’m wrong or too generalizing here, dear Caribbean readers!) which supports the general theme of the album.

The second song, “Touch My Body“, is followed by “Naughty Hand“, a song featuring Verbal Jint. The title of “Naughty Hand” is amusingly enough the exact opposite to the message of their single. While the self-explanatory “Touch My Body” is an invitation to sexy times (“My pool gets soft and sometimes warm just for you”, anyone?), “Naughty Hand” chides a boyfriend for moving too fast.

Music-wise, “Naughty Hand” has a catchy beat and Verbal Jint’s rap adds to the smoothness of the whole thing. It’s not an outstanding song but it isn’t bad either. 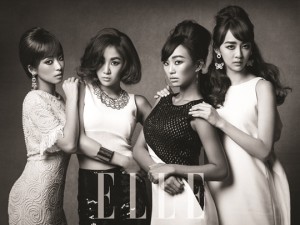 The fourth song is “But I Love U“, the only song with a more solemn subject matter on the album. The speaker is begging her boyfriend not to leave her, although their love has run its course. This song is a nice change in style with its urgency and a more dramatic feeling.

The sounds of a piano also signal its differences from the rest, and the drums imitating the sound of a heart beating in the beginning show just how emotional it is intended to be.

From this, we go back to a more careless mood with “OK GO!“. This song, asking its listeners to party and “lose [their] mind and play”, is the most lively piece on the album. Occasionally sounding like a mix between a 2NE1 song and a Ke$ha song, it sounds like a tune that I wouldn’t mind getting drunk to — it seems to fulfill its purpose.

Finally, the album ends with ‘Sunshine“, which is co-written by Hyorin. The track refers to a new, happy relationship, and it would fit perfectly on the OST of a quirky romcom drama. With its addictive, toe-tap inducing beat and positive lyrics, it lets the album end on a high note. “Sunshine” might not be the most memorable of songs, but it can serve as a nice little piece of pop goodness to brighten your day. 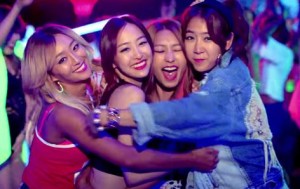 All in all, Sistar succeeds in creating an enjoyable album for the summertime with Touch & Move. It’s a nice assortment of mostly uplifting songs; and even though one might not be able to listen to it all the time, that’s alright as well. Since it has such a seasonal focus, Touch & Move can be tossed aside when summer leaves and maybe brought back a year later.

For its happy vibes, the album gets a 3.5 out of 5. I know I’ll listen to it a few more times when I’m on summer vacation this year, even though it might be more of a background accompaniment than a main attraction.