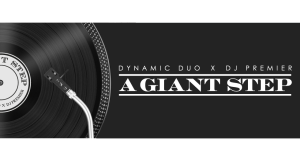 With recent talk on Seoulbeats about crossover collaborations between Korean and international artists, another joint venture has been released earlier in July. Dynamic Duo were spitting bars over a couple of tracks produced by DJ Premier (Preemo). The collaborative EP entitled A Giant Step comprises of two songs crafted by the legendary hip hop producer. In the K-pop industry, there have been some crossovers in K-pop and the hip hop community – with Snoop Dogg, Kanye West, and Missy Elliott all contributing verses or production for a few of K-pop’s biggest names. These concerted efforts are great.  It is satisfying to see people from seemingly different walks of life come together and find common ground in music. When these two entities met and decided to collaborate on this venture, it felt like a perfect match.

For the unfamiliar, DJ Premier is widely considered a legend in the hip hop industry. He was one half of the Gang Starr duo and has crafted songs for acts such as Jay-Z, Nas, The Notorious B.I.G, etc. He consistently lands near the top of many publications’ lists of top hip hop producers of all time, and there is a reason for it. His production style has a consistency to them – there is a discernible flavor that includes soul, instrumental elements, and a mid-tempo speed.

So how does one of the world’s most renowned hip hop producers end up meeting one of the most influential hip hop acts from Korea?

During a K-pop event held at Cannes, France, the duo linked up with the producer. The event “K-pop Night Out at MIDEM 2014” was hosted by the Korean Creative Content Agency and helped to showcase Korean acts to music professionals from the industry. Preemo’s manager exchanged details after seeing the pair’s set, and this led to their partnership on the project. DJ Premier had this to say about the pair:

“When I listened to their CDs, I liked the way they flowed. They had dope voices, and their production sounded more like what I like to listen to.”

There is a mutual type of respect for each other’s artistry. Preemo can respect the flow and lyrical content that Dynamic Duo exhibits in their body of work, and Dynamic Duo grew up inspired by the beats laid down by producer. Both groups have a shared love of hip hop, and they also have respect for what one another has done during their respective careers. When talking about the Preemo in an interview with Noonchi, Choiza said:

“DJ Premier’s music was like our textbook. He created what we considered real hip-hop music. That traditional sound, rich texture, and feel – he elevated the concept of sampling by chopping up the original song into pieces and reconstructing them into a whole new record.” 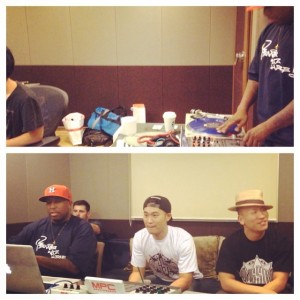 For the pair, this meeting and opportunity definitely has a lot of meaning. Hip hop has an elaborate history embedded in its roots. For both parties, their struggles and experiences run deep. DJ Premier’s works all have a narrative behind teh scenes, and in an interview with Complex he recounts these moments from his brainstorming session with Nas building songs like “I Gave You Power” to conversations with Biggie revealing the pain and betrayals that come with success. With this collaboration, the two surely have a new story to tell.

Preemo’s music is a part of Dynamic Duo’s musical upbringing. He is cited as one of their inspirations, and it must be gratifying for them to work with someone that is revered so much in the hip hop musical tradition. It was Preemo’s first time flying out to work with an international artist instead of them flying out to meet him. The preparation for the project first involved discussing the lyrical content and brainstorming online. After a few months, DJ Premier met up with the pair in Seoul to finish up the project. The venture has resulted in two tracks so far: “Animal” and “AEAO.” DJ Premier has stated that he would love to work with Dynamic Duo again. The three of them performed during a showcase to unveil their work to the public.

While collaborations can range in scale, this one seems primed to set a high standard. As respect for artistry is combined with history, there is a richness that comes with the work. For these two parties, the end result is two great tracks and hopefully a plethora of positive memories. More than anything, this joint project reveals the power of music to unite different groups of people together.