Block B Gets Wild ’n’ Crazy for "Her" 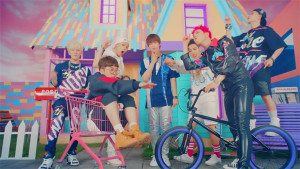 Just as the summer is reaching its peak, we get an onslaught of sugary sweet K-pop titles all vying for a coveted spot in your iPod’s Summer Jams playlist. Among the fray we get a tasty bit of wild ’n’ crazy from Block B with their latest release “H.E.R.”

Before we get started I just have to make it known. I’ve never really listened to Block B, and I’ve not exactly been particularly interested in them. After watching this video I’m wondering what the hell I was so hesitant about! These cats are nothing if not absolutely friggin’ crazy, out of their mind and talented in a way that should have many of the most popular idol oppas feel a bit intimidated. “H.E.R” is one of those songs you put on, and before you realize what’s happening, you’re hanging from the chandelier, bouncing off the walls, reaching for another tumbler full of Fun Dip. And that’s just the song.

But before we begin to “dissect” the music video, it has to be said after all the commonplace tunes about love at first sight, it’s quite refreshing and even more entertaining to find a song that not only describes in detail the out-of-control, “I need you baby” feelings of a very excited young lad hyped up on a wee bit too much caffeine, it also goes on to talk about how jealous other girls are because his love interest is just so damn perfect: “There’s nothing more to add to her beautiful body. Normal girls can’t even compete. They’ll probably gather together and talk badly about you.” 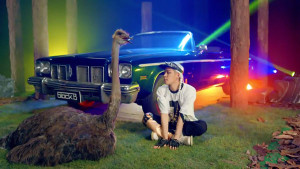 However, despite all the craziness and the proclamations of outer perfection, the verbal expression of exceptional thirst and even jealous shade tossed around by the so-called normal girls, the song has a tenderness to it that isn’t found in a lot of songs about boys falling in love with girls. For many it ends at what they can see, but we as listeners never get the full impression that anything goes beyond that.

The lyrics in “H.E.R” express a love of the woman as a complete person, Block B even tossing a little shade of their own by proclaiming, “Be careful of the wolves around you. Bastards only care about outer appearance.” They go on to show love for those things that most would consider imperfections: “Your breathtaking curves makes me faint right away” and “You have skills but you’re not pretentious. Your personality and your just good enough volume. I wanna hug and kisses.” Seriously, can we have more guys like this who consider the woman as a human being, please?

Of course, a song with this much maturity and depth must have a video that’s just as meaningful right? Yeah, no. While the song is romantic at its center, the MV seems like a reason for the guys to go completely berserk.

When the first trailer for the video came out, a few people were a bit… unimpressed, to say the least. We have the global standard of beauty (pale skin, blonde hair, blue eyes), and she’s on display like piece of rotisserie chicken, licking ice cream.

The boys ogle and drool and even take pictures, until her ice cream falls in slow motion in her lap. And though the lyrics speak of the woman as a person, it could be argued at some parts in this video the woman is more or less a commodity. For instance, objects used with “H.E.R” on the labels (the putt-putt golf with a flag at the hole—yeah, we do subtlety—claiming “H.E.R” as the goal, the laundry detergent that gets the clothes oh-so clean) and the fact we never get a name, just the anagram H.E.R, as if she’s a faceless entity.

Then again, one could argue the particular inanimate objects used to describe “H.E.R” point to just how perfect a being she is, how there’s nothing that could ever be as brilliant or as coveted as this woman our protagonist treasures. The namelessness could also make the point that “H.E.R” is, in fact, all women. She doesn’t have a name because she doesn’t need to have a name. By virtue of her womanhood alone she should be treasured and loved for the ethereal being she is.

But I’m sure most of us would completely disregard all that for the bright colors and the LazyTown style flamboyance. And if that doesn’t do it, I’ve got one word for you: ostrich. That’s right. Zico gets real friendly with the long-limbed flightless bird, even taking it for a bit of a ride in his classic whip. 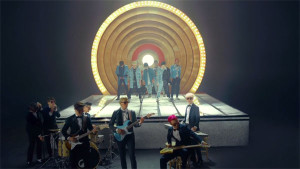 The guys really make deliciously sarcastic use of the stereotypical conventions found in most K-pop videos: bright colors, cars, even the laser-drenched “box” where they can show of their dance moves—a silly sort of wiggle that, oddly enough, fits perfectly with most ridiculous dances out there (things that have names like “Yeet” and “NaeNae”).

They even take a pause for the cause and have their own little interview on a faux variety show where they talk about their new “cute” concept, then pan over to their “comeback stage” where they’re both the performers and the band. Even the image of a blonde pin-up is very much tongue-in-cheek–her eyes EXTRA blue, her shorts EXTRA short, as if the very presence of the woman in the teaser was a sarcastic kick in the jiggly bits to the copious amounts of so-called “fap material” present in most music videos (and is perhaps another little dig at the whole “sexy” vs. “aegyo” concept running rampant this year). It’s all very Mother Goose Rock ’n’ Rhyme. I absolutely love it!

Needless to say, the camerawork plays a huge role in madness and mayhem of the MV, and it fits perfectly. Even with all the randomness stuffing the video ’til it’s bursting at the seams, I don’t think I’ve seen a video this fun since GD’s “Crayon.” That’s it! Imagine that but with a funnel down its gullet, being force-fed the sugary stuff in Pixie Stix. Multiply that by about eight, and you’ll get “H.E.R.”