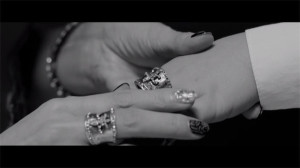 First and foremost, whenever a project comes along that includes one of South Korea’s most important artists, I will always, always be required to watch it. No questions asked, anything with Tiger JK’s stamp on it becomes a part of my existence. Singer Kim Wan-sun’s ode to failing romance “Goodbye My Love” is no exception.

The song itself is tragic. Making use of a tango composition, Kim Wan-sun expresses that it’s over between her and her long-standing beau. She implores him to never touch her again, never hold her again. She wants the echo of him out of her mind forever. Meanwhile, JK and Bizzy take on the role of two sides of the disgruntled lover, telling her to refrain from saying goodbye, comparing her to Sharon Stone, telling her not to lose her instinct—the natural draw between the two of them. It’s a beautiful song, made even more impressive by the music.

The video, however, is in a completely different league. There’s one set—a doorframe, an empty bedframe, a single wooden chair, and a closed door on the other end. The simplicity of the set belies the complexity of the video and the tragic story it tells.

Kim Wan-sun plays something of a gypsy witch. She climbs the stairs to this sparse bedroom to be confronted by a child standing on the wooden chair and holding a bunch of balloons. She lovingly strokes the child’s arm as a mother would to comfort him. Then she places an ornate ring on his finger—a ring so big it almost falls off as soon as it’s placed there. When the child releases the balloons, Wan-sun begins to do an adorable shuffle with the little gentleman, who remains standing atop the chair.

Cut to the next scene, the boy is now a teenager. Upon his finger, the ring she gave him as a child. The two dance a basic Argentine tango, the gypsy first impressing her desires onto him without giving way to anything too illicit. She acts out the chorus, pushing him away, bringing him close again, removing his hand from her face, which he placed there in a misguided burst of passion. She embraces him, comforting him even when she’s pushing him away.

The teenage love fool who deigned to have the company of our gypsy becomes mature, a grown man who senses he’s now become of an age where the evergreen seductress will accept his ardor. But again, she dances this tango of passion only to walk away and leave him alone in this barren room. The moves are more intricate, the tango more involved and full of more heat than the softness of the dances before it. Then in a puff of smoke, she’s gone again.

She continues to come to him, as our hapless love interest becomes of a certain age, a somewhat tired shell of his youth. But he still takes her in his arms and leads her around the room. A once-haggard gentleman has once again become a passionate lover, while our ever youthful temptress continues to accept his offer of cadenced romance. She comes to him as his life continues to whittle away, promising him passion, then leaving him cold and distraught, alone in the chair and slumped as in defeat.

The final time she enters the room, our unfortunate fellow has become weak, a withering grandfather who still holds her scent close to him. His wrinkled hands and weathered face tell a tale of someone who was once enticed and excited by love, but who is now tormented by it. He struggles to take off the ring, a prison that seems to keep him in complete isolation until he gets a glimpse of his captor—the gypsy witch, who visits him once more, taunting him with her seduction while he sits in the chair, unable to do more than open his arms in hopes that he’ll be able to have on more dance with her.

The video is exceptionally symbolic of being trapped in a one-sided romance, an affair with someone who tempts, then pushes away. We see the evolution of the lonely love interest in every stage of life, from innocent youth, to curious adolescence, to mature and desperate, to finally faded and resigned. The final scene shows an empty chair, the passage of time finally relinquishing the man from his shackles, while our gypsy still dances her dance of temptation in the last frame. 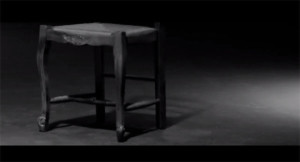 Shot entirely in black and white and with cut scenes of Wan-sun throughout, the video is incredibly beautiful, if not just the least bit heartbreaking. And while the song and the images portray the same story, just who both the victim and tormentor are is at odds. Wan-sun would have us believe she’s the one that’s been wronged and is finally fed up. However, the video paints a picture of Wan-sun as a temptress who tortures the man until he finally just expires.

Both song and video left a great impression on me. One most certainly wouldn’t be as effective without the other, which makes this a perfect combination of lyricism and visual storytelling. A lovely video that’s both flawlessly executed and eerily painful.

For Your Viewing Pleasure: Wrapped for Christmas