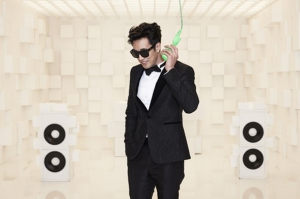 Despite the plethora of idol actors, it’s not commonplace for an actor (or a model) to be active as a singing artist. So Ji-sub is one such actor-singer. He ranks as one of the many handsome and talented actors in Korea, but he’s also a rapper. This may come as a shock to some, but the actor has actually been releasing hip hop music since 2008.

In spite of what is typically regarded of actors-turned-artists, So has the skills to back up what he’s doing. No, he’s not spitting out rhymes like Verbal Jint or Tablo, but he’s got the ability to deliver songs that flow, and his tunes also relay some strong messages. His latest release is no exception.

After a little bit over a year from his last release, So returns with 18 Years, a new EP. The album has been titled quite literally, as the actor-singer has been in the entertainment industry for 18 years. His career began in 1996 when he debuted in the television series, Three Guys and Three Girls. Along with the EP, So has released the MV for his title track, “18 Years,” featuring Saetbyul.

As the title suggests, “18 Years” is about So’s career as an actor-model. Coming from a personal place, it’s no wonder that So wrote and composed the track himself. The song serves as a reminder of how volatile and fragile the industry is, and how the public becomes a constant burden.

“18 Years,” a track that could represent all actors and artists, is a worthy listen. We all like to think, as fans, that we’re there to support and cheer on our favorites. Instead, we can become a source of pain, turmoil, and enslavement. For an extremely popular veteran to point this out is poignant and noteworthy.

It’s not news that the tough entertainment industry can be soul-sucking. “18 Years” highlights the struggles for So. He speaks on the pressure the public puts on him, and the ability to make them happy. So even calls out the public and their obsession with gossiping, as well as their constant judgements. He compares his career to wearing a mask, and feeling a loss of reality.

However, there’s a light at the end of the tunnel for So: he’ll continue to work at finding himself and being himself.

[youtube=https://www.youtube.com/watch?v=OFszXKg-hL8] Of course, do take a moment to admire how utterly handsome the man is. Okay — that’s enough.

Just as the song references the entertainment industry, so does the MV for “18 Years” extend its message. The MV is one giant metaphor.

The MV begins with So in a scenario we’re all most familiar with: a photo shoot. He’s a model after all. However, within the first ten seconds, we see the break in the façade. As the camera flashes on his emotionless face, we glimpse a bound So. This brief look is an introduction to what lies further into the MV.

During the verses, So turns into an inanimate object. He shuts down, as if he has no soul, while gloved hands “put on” his face and change his clothes. The hands even go as far as to fix a smile to his lips for his next photo shoot. This is representative of the lack of control he has with the image he has to give. It becomes clear that So isn’t always an active participant in whatever he does; he may be thought of as a pawn in the industry.

This idea is brought further into the light when we finally get the full visual of him being bound to a chair. During the refrain, So’s actual message is shown. Wires come from different directions and the actor-singer is shackled to what could possibly be a barber’s chair, or a constraining chair, a movie/TV contraption that typifies asylums. An implication can be drawn: So is rendered immobile by the industry props, and this represents him being constrained by the industry itself.

After going through what seems like an electrocution (or seizure), it seems that So has awakened from the brainless state he’d been in. He shakes uncontrollably, TVs burst, and smoke rises. In the end, we see him open his eyes, and the camera zooms out to an empty chair. With the cutaway image of him walking away, it’s clear that So is freed.

Of course, the music and casting of Saetbyul are great, but the symbolism and lyrics are what is important in this track.

“18 Years” is a reminder of the struggles faced by actors, singers and other artists. It’s also a reminder of how the public can be poisonous. So’s comeback is poignant, important, and strong. He’s not having frivolous fun, and because of that, “18 Years” comes out very well.