Henry's "Fantastic" MV is Not That Fantastic

Anddd… Korea’s favourite farting soldier is back with a new album and MV. While it’s questionable why SM scheduled his comeback perfectly to coincide with f(x)‘s, it makes sense that SM would want to strike when the iron is hot. Henry‘s popularity with the audience is at an all-time high from his stint on Real Men, so it’s understandable that his comeback has generated sufficient hype. Well, did the MV rise up to expectations? 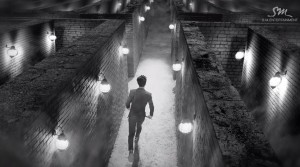 While Henry has managed to break free from the Super Junior-M shell, the MV for “Fantastic” unfortunately has SM written all over it. A semblance of a plot mixed in with 2 different box sets. Yup, sounds about right. The thing is, the hype surrounding Henry now is a million times more than when he made his solo debut with “Trap”. All eyes are on this cute idol boy for once, and you would think SM would try something more creative, to bring across the quirkiness and sheer musical talent of Henry. I hardly see any of that other than the “violins, violins, everywhere” tactic, and the pretty cool inclusion of the inside-of-a-violin set.

“Fantastic” is a pretty cliched pop song; its only distinct Henry factor is the dramatic violins insertions that ring throughout the song. The lyrics are nothing special — it talks about how a guy meets a girl who makes him want to improve himself to be a better man for her. Previously a playboy; but now, he wants to be taken seriously. This tune serves as a plea for the girl to wait for him, since it will be “fantastic”. Hm, okayyyy. 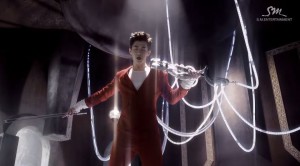 SM Rookies‘ Seul-gi stars as THE GIRL, and she initially intentionally runs away from Henry. Henry keeps on chasing after her in this pretty a-maze-ing set, but to no avail.  This weirdly seems to be a theme in K-pop nowadays. This whole introduction scene is in black and white, before it segues into colour when the songs starts.

Henry picks up his violin, and pipes appear and suction on to him. This imagery initially remind me greatly of Doctor Octopus from Spiderman, and I attempted to analyze it further. But then, it struck me that this is a SM MV, and so I moved on.

The image of Henry as a musical genius is ingrained into the audience’s mind, as he shows off how effortlessly he can dance and play the violin at the same time. The process of him playing the violin while absorbing energy from the pipes is his method of becoming a better man. It’s adorably appropriate because to a certain extent, for Henry, music makes him a more whole and complete person.

We see that Henry’s effort and concentration is working out, since he is able to hold on to Seul-gi without the use of the violin. The process is eventually completed and the pipes fall off. I’m left wondering what the random pipes were actually doing to him. It’s not exactly a sensible or a pretty concept. Who knows? The bad video games CGI distracts me to no end.

The athletic and energetic choreography is enjoyable to watch, especially the little crotch zoom-in during ‘fantastic’. Coincidence much? I love that the violin is pretty much the star of this MV as much as Henry himself, since no one really thinks of Henry without his violin coming to mind. Henry’s violin footwork never fails to wow me, and I’m glad it was included in this dance.

The styling for Henry is also impeccable. The red suit actually fits him to a tee, alluding somewhat to a boy maturing to a man. The dance outfits further accentuate his youthful look, and it reflects perfectly his need to grow up to be worthy of the girl.

“Fantastic” is just a so-so song — nothing awesome, nothing disastrously bad either. The chorus is catchy, but not especially fresh. The bridge is misplaced and sounds awkwardly forced. And I know that Henry isn’t a native Korean speaker and he’s awesome for already speaking seven languages, but his pronunciation for this song does sound a little more stilted than normal and it puts me off. His nasal voice can get a little grating, and this track really doesn’t do his musical talents any justice. 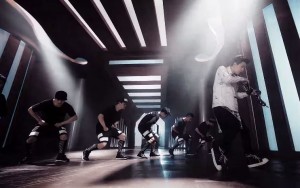 “Fantastic” doesn’t really break any new boundaries from “Trap”, and doesn’t provide any original perspective that Henry has the potential for. Yes, we all see his violin playing and versatility, but the song isn’t really anything unique to K-pop, unlike how Henry is as a K-pop idol. I love Henry; I really wanted to love “Fantastic”. But sadly, it was not fantastic enough for me.

Was “Fantastic” fantastic for you guys?