What a change! After (almost) exactly one year, Kim Hyun-joong has returned with his new mini-album Timing and its lead single “Beauty Beauty”. While he went for a defiant, strong concept with his previous single “Unbreakable”, the new music video shows the viewer a completely different side of the singer.

The MV’s storyline is easily reproduced: Kim Hyun-joong spots a woman he is attracted to and he decides to follow her to a bar, where he momentarily loses her. But he manages to find her again, and seems to be able to woo her with his (if the lyrics are any indication) admittedly slightly repetitive confessions of love. These are mostly concerned with the woman’s good looks and general perfection.

What is interesting though is the way in which this concept has been realized: First of all, the music video is shot in a way which suggests that it was recorded in only two takes (smart editing might have been at play here). The cut between them separates the music into two stylistically different parts.

The words popping up on the screen during the first part suggest that Kim Hyun-joong and his team were at least a little influenced by 2NE1‘s “Happy” MV when they came up with the concept for this music video. The colorful letters don’t seem to have been created by Mina Kwon this time, but they go for a similar summery, fun feeling. Other pop-art references like a Roy Lichtenstein-inspired background emphasize this attention-grabbing, lively aesthetic.

The beginning of the second half of the MV, after Kim Hyun-joong steps outside of the bar again, is made to look like a video/computer game. With a rather simple effect, Kim Hyun-joong is turned into a character on a motorbike; searching for “his” woman and collecting little heart-shaped items in the meantime.

Although this is a fun idea, it doesn’t seem to fit in very well with the rest of the video. As soon as he sees her, Kim Hyun-joong leaves the game mode and colorful words start popping up again. One wonders how the gaming sequence is related to the rest of the video, and no satisfying answer is given. In the end, Kim Hyun-joong directs the camera’s (and the viewer’s) attention towards a display of fireworks, and the MV ends with a look behind the scenes of the MV shoot.

The song itself is decent, but not overwhelming. It has a very catchy beat and a chorus that will be easy to sing along to for everyone. The echo in Kim Hyun-joong’s voice is rather reminiscent of classic Eighties pop hits, and therefore still somewhat on trend. With its retro vibe, it would have been nice as a B side but seems to fall somewhat short of an actual single. 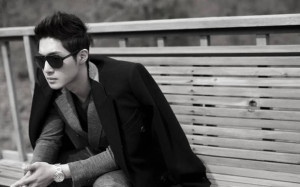 All in all, “Beauty Beauty” seems like just enough effort for what is effectively a four-track mini-album. It seems questionable though, if this sort of comeback will stick in the minds of the listeners and viewers. The music video, with its vibrantly colored effects and frequent scene changes, is entertaining but regrettably its storyline might not have been sufficiently thought through. Therefore, the music video of “Beauty Beauty” gets 2.5 out of 5.

As a summer single, “Beauty Beauty” is fun and energetic — even though it is a bit repetitive. But it comes as an unexpected change from his last single, and it should be admired how well Kim Hyun-joong pulls both concepts off. For this and its retro charm, the single gets 3 out of 5.