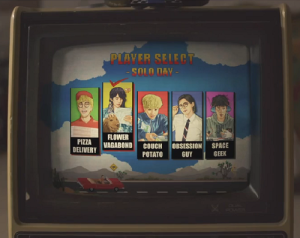 The quirky guys from B1A4 have returned with their latest MV for their new song “Solo Day.” This new video from the WM Entertainment camp is a quite a grand production. It was shot over a period of 3 days and 2 nights at various locales in the state of California (in the US). The trend of overseas MVs is really hitting its stride with this offering from B1A4. Unlike most other K-pop videos shot in international locations, “Solo Day” does not simply feature the boys in memorable international environments. Rather, the boys of B1A4 have concocted a group of very distinctive characters who thrive in the scenic California streets, and the video’s plot is a refreshing mix of humor and eccentricity.

Even at the start of the video, the quality of the production is evident. Sandeul makes his appearance via a scooter to deliver a stack of pizzas. The only sound we hear is the buzzing of his motor bike, but the viewers are soon introduced to all the members — each with a specific role. The setup of this scene is akin to a cast of characters from an action movie (i.e. Oceans Eleven). There are animated panels with each designated role spelled out: Sandeul as the ‘Pizza Delivery’ person, Gongchan as the ‘Flower Vagabond’, CNU as the ‘Obsession Guy’, Baro as the ‘Space Geek’, and Jinyoung as the ‘Couch Potato’. It is a well done and stylized introduction to “Solo Day” — the game which Jinyoung plays throughout the MV, and presumably the members are enacting this game during their adventure.

What I love about this group and video is how inventive it is. Each member takes on quite a unique personality and has an ‘expectation vs reality’ reveal at the end. Let’s take a look at each member individually. CNU has tea with a lady outside near a shrub. During a moment where it appears he may be leaning in to kiss her, his obsessive nature compels him to adjust her spoon to be placed in a particular orderly fashion on her plate. Gongchan walks the streets with warnings of an impending UFO invasion, but he also shares the sandy beaches with an adorable dog. Sandeul delivers pizza to a party which he eventually joins in on. Baro uses his self-proclaimed geek status to create some sort of UFO listening device.  Jinyoung seems to be playing someone who is a recluse, but he secretly dreams of having an adventure filled with aliens and drives down scenic highways. They all have these peculiar traits to them, but at the end of the video, they embrace their quirks.

Acting-wise, the sneaky breakout guest appearance of the MV is definitely that golden retriever. Quite the majestic beast, its acting (or ability to take direction) is excellent. The animal embodied the nature of the MV well — matching its human counterparts in each frame its in. Aside from that, the carefree vibes and summery aesthetics made for an enjoyable viewing experience. The expressions from the members were spot on. Their comedic timing was excellent. A few notable group scenes included one where they encounter an alien at diner where they ravenously feats on some pancakes, waffles, and burgers as well as their UFO encounter at the beach. Their reactions had me laughing hysterically. Their fearlessness and lack of concern over maintaining any particular image of ‘cool’ is what makes them so relatable.

Of course, the song is also another great addition to B1A4’s discography. It has a laid back nature because of the slower tempo. The song is backed by a guitar instrumental which helps give it an acoustic summer type of feeling. It truly lives up to being a summer anthem with the whistle hook and the catchy “solo solo solo solo day” refrain.

I probably cannot express enough how much I love this video. The special effects were great. Even the UFO looked like it was given a good CGI treatment. The UFO fit the comic book/video game style during some of the crazier moments. This video is simply the perfect trifecta of creativity, originality, and comedy. Overall, the MV is an extremely fun and original piece, accompanied by a solid musical track. So readers, are you in agreement that this is one of the better MVs shot in an overseas location?