LU:KUS Debuts Typical K-pop with "So Into U" 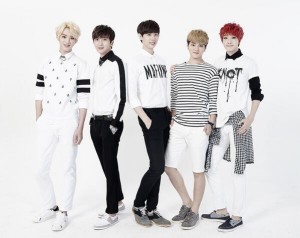 The journey to debut has been quite the arduous and long one for rookie group LU:KUS. Although the group had been announced and had planned on debuting back in 2013, they didn’t actually debut until now. They also went through a label change in 2013. Additionally, J.ONE (Haewon), Donghyun (Taefung), and Jinwan (Sulhu) were members of the now-disbanded group X-5 — casualties of the Open World Entertainment outrageousness. So, it’s a happy day that LU:KUS has finally debuted with “So Into U.”

With its typical K-pop sound, “So Into U” is familiar. Familiarity can be both good and bad. This is good in respect to the former X-5 members: the song doesn’t veer too far from what they used to perform. Electronic and eclectic, “So Into U” is reminiscent of X-5’s “Dangerous” and “Fantasy.” These similarities are sure to draw former fans and any listeners who previously had a passing interest in X-5’s music. Also, in a time when some are lamenting the changing landscape of K-pop, the familiar sound will probably please them.

However, it’s always nice to see something different and new, which “So Into U” doesn’t bring. I didn’t expect the song to be mind-blowing — I haven’t become that spoiled by rookies yet — but something unique would have been appreciated. As the number of rookie groups debuting keeps increasing (there have been approximately four new boys groups in the past month), groups need to stand out. “So Into U” simply doesn’t accomplish that.

“So Into U” is K-pop in its most basic form: electronic pop. There is no real surprise musically. You have your auto-tune, electronic instrumentation, driving bass line, and a brief break in the music to show a shift.

The shift occurs at the rap part, which was longer than we normally expect in a K-pop song. It was almost a full twenty seconds long. That’s a good thing, since it means the rapper is not some random addition to trot out for a few seconds simply to say that the group has a rapper.

Like the music, the lyrics are typical as well. Guy sees girl from afar, can’t breathe, and is now intent on making her his. He even claims that he is different from all the other guys. Okay, haven’t we had enough of this nonsensical love-at-first-sight thing in music? These continuous and typical professions of love are becoming way too mundane.

The MV for “So Into U” is nothing special either. From the sets to the lighting, the MV feels like every other K-pop MV ever made. Yes, that is a massive generalization but still holds true. If you didn’t know better, you would think there is a superstore that MV directors shop at and a class that all producers take.

First, we have the dirt floor set. This is beginning to be a bit more popular, as we are seeing it more often in MVs for boy groups. Groups such as B.A.P, EXO, BIGSTAR and Wonder Boyz have used a dirt setting for dance sequences. It’s a nice effect, but has no real purpose. Do directors think “Hey, let’s have them dance on dirt. People will think that’s cool and that these guys are dirty and rough. Chicks dig bad boys.”? LU:KUS does try to make it a little different by putting lighted pyramid frames in the background. But haven’t we seen those used before? To make things worse, the debris flying about blurs the vision.

Second, there are the industrialized scenes. Just as the dirt floors are becoming common place, so are the tunnels and fences. From Big Bang and 2NE1 to U-KISS and LC9, K-pop acts employ the use of industrialized props to denote some sort of contrived toughness–emphasis on the contrived. To change it up a bit, LU:KUS has exhaust fans also in the background. Add that to the lighting (lens flare and blinding back lighting), and the fans have become a major distraction. While the dance should be the focus, viewers’ eyes are actually drawn to the hypnotizing whirl in the background. 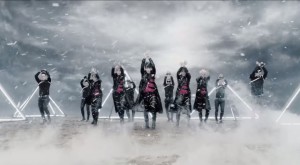 We also have the random girl appearance. It will forever be irritating when a MV features either a male or female with which no one interacts. While this may have some relevancy in relation to the lyrics – they spot the girl from afar – it is still awkward. If you want this girl to be yours, you should actually meet her.

The MV does, thankfully, tell us how to properly pronounce the group’s name.

Regardless of the shortcomings of “So Into U,” LU:KUS does have one thing on their side: their unique background and smart marketing. People knew who they were a full year before officially debuting, and even got a glimpse at the track beforehand. But, neither great nor bad, LU:KUS’ debut is still average in K-pop.