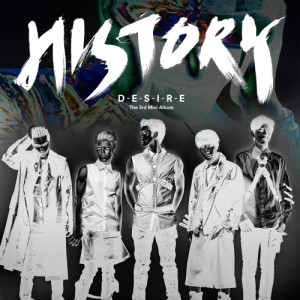 Having debuted early last year with little recognition, History has been fighting ever since to shed their nugu status. Their follow-up mini album Just Now fell flat, which was a shame as the boys are extremely talented vocally, and fans know History is capable of better.

“What Am I To You,” released earlier this year, hinted at a more mature direction with a departure from their earlier style. While not perfect, it was a step in the right direction that has lead to the solid mini-album, Desire. Containing five tracks, Desire manages to find the right balance between displaying the boys’ vocals and remaining interesting and engaging to the listener.

Desire starts off with “I Got U,” an uptempo song with a funky rhythm. The repetitive bass line carries the song and holds it together amongst all the melody changes. Although it may come off as too repetitive to some, “I Got U” would sound too disjointed without the bass. The amount of harmonization in the song — though it only comes in short bursts — is welcome and is part of History’s unique charm. With the lack of harmonization from K-pop idols, History’s vocals stand out even more and give us a glimpse of what K-pop could be like.

“I Got U” also sets the tone of the album with its energy and funk. Desire melds a variety of styles and remains fast-paced and full of energy. Title track “Psycho” best demonstrates this with its fusion of ’80s and contemporary pop. Even as the song slows for the bridge sung by Kyung-il, Do-kyun, and Yi-jeong, the synth elements in the background keep the ’80s beat, providing a contrast to Kyung-il’s sweet vocals.

The lyrics, on the other hand, are far from sweet. They follow a man who stalks his ex-girlfriend after they break up. The lyrics are full of worrisome lines such as “Did you think you’d be done with me if we broke up?” and “Don’t say no, we both know that’s not how you really feel.” But the scariest line of all has to be,

Nobody is going to believe you,
They’ll think there’s no way I could do something like this.

I’m well known, a great guy —
That’s what I’m like during the day

because let’s face it, this happens a lot. The burden of proof always falls on the victim, and even when there is evidence of stalking, people often dismiss the stalker’s behavior as ‘harmless’ and ‘they just miss you.’ It is a terrifying situation, as demonstrated by the music video, and “Psycho” is an aptly titled song.

In contrast to the previous electronic tracks, “There’s No Sun” focuses on traditional instruments with a simple drum beat and acoustic guitar. A light piano melody floats throughout the song but remains largely confined to the background. “There’s No Sun” also contains hints of Latin influence that show up during the chorus.

The Latin guitar pieces save “There’s No Sun” from being a filler song by imbuing it with a sound not often heard in K-pop. It makes the song stand out and emphasizes how well History’s vocals match acoustic songs.

Next up is “It’s Alright,” another song with elements of funk and ’80s pop. But whereas “I Got U” stood out due to its energy, “It’s Alright” is largely forgettable. It tries to be a smooth, midtempo song, and while it mostly succeeds, nothing about it stands out. Even the vocals — which History always delivers on — can’t save this song; “It’s Alright” is easily the weakest song on Desire.

“Blue Moon” is the last track on Desire and also my favorite. Had “Psycho” not been the title track, “Blue Moon” could have easily been chosen. It starts off simple with light piano notes that fade into an acoustic guitar combined with snapping. When the drums enter, the tension builds, and the song ramps up with electronic beats.

However, instead of turning into a club track, the chorus is restrained. This is a great choice as heavy dance-pop songs haven’t suited History’s vocals well. The rap is also wonderfully executed especially considering Si-hyoung’s rapping is usually hit-or-miss.

While Desire doesn’t make History stand out from the current slew of K-pop comebacks, it is still a solid mini-album that shows direction for a group struggling to find a foothold in the industry. The ’80s pop influences throughout Desire were unexpected but definitely welcome; it suits History more than the current electro-pop seems to. If History wants to continue in the K-pop industry, they need to shed their nugu status soon, and with Desire, it seems that Loen is taking the steps to do just that.