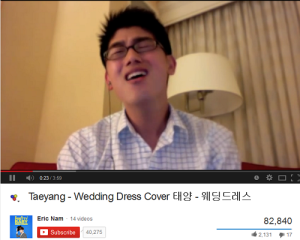 First started in 2005, YouTube has opened the floodgates to people sharing videos online for anyone willing to watch. Not all countries utilize or allow access to this video sharing site, but it still has a major global impact, especially in many English speaking countries. As K-pop’s burgeoning international fandom continues to grow, YouTube has been viewed as a currency in which a group can measure the size and devotion of the fans with. Although the numerical value of views are questionable, YouTube has also functioned as the intersecting medium for some hopefuls to make a lasting impression and eventually debut in the K-pop industry.

Recently, Megan Lee has dropped a teaser for her upcoming single “8dayz.” She made her start as a musician uploading videos on her YouTube channel, where she would often make song covers in both English and Korean. Her entry into the K-pop landscape is an interesting one because she first utilized YouTube as her platform for gaining recognition as a singer, before furthering her pursuit of making it in the Korean entertainment industry. She attracted attention in the K-pop industry through several competitions that she entered — winning 2NE1’s “Lonely” YouTube song cover contest in 2011 and participating in MBC’s Birth of a Great Star Season 1 & Season 2. She eventually would sign under Soulshop Entertainment.

Why is this online video uploading site important? It becomes a stage where one can showcase their ability. The uploader can get feedback and along the way YouTube has transformed as a means to connect individuals as well. While she has uploaded a lot of solo covers, Megan Lee has also collaborated with another prominent YouTube star, Sungha Jung. Sungha Jung is known for his guitar playing style – a finger picking style that is particularly notable for the degree of difficulty. He started uploading videos when he was 10 years old but has gone on to amass over 2.5 million subscribers.

He gained prominence in the K-pop sphere not only through his covers, but through his collaborations on K-pop records. He was a featured guest on Narsha’s “I’m in Love” and has played live with 2NE1 and Big Bang. What is startling is how he was able to go from playing guitar covers to becoming a phenomenon. His latest album Monologue will be his fourth solo album and features many of his original compositions. It was through YouTube that he was able to gain the wide exposure that he did, and the site is also significant because it has become the primary source of communication that he has with his fans.

Some idols who made their start on YouTube that have already successfully made their debuts are Ailee and Eric Nam. With Ailee, her start via YouTube is a different one than most. During some interviews she held after her debut with “Heaven,” she has claimed that she first started uploading videos out of sheer boredom. She sang a lot when she was younger but was unsure of whether she could have a successful music career. After uploading videos as a hobby, she gained a fair amount of attention for her spectacular voice.

It is riveting to see how YouTube can be considered a barometer for talent. Being validated by others can give reassurance and confidence for someone to pursue her dreams. Ailee eventually signed under YMC Entertainment and surprised the public unfamiliar with her when she performed with Wheesung on an episode of Singer and Trainee. Ailee utilized YouTube as a place where she could receive honest feedback from people she did not know. Taking those online critics and supporters as a motivational factor to validate one’s talent shows the power of a platform that can transform onlookers from around the world to people with some power.

Being judged online can help motivate some singers, but YouTube has also become a means for communication internationally. It has been used to increased awareness of K-pop auditions. For example, MBC’s Birth of a Great Star held online auditions where prospective singers can submit their audition videos. If picked, they would be flown out to Korea to participate in live auditions. Megan Lee was a participant across two seasons and Eric Nam was another idol who successfully gained attention through this process. He went on to make the top 5 but returned to YouTube after the show ended. However, he was eventually signed by B2M Entertainment and debuted in 2013.

YouTube is arguably the largest internationally used platform of video communication. While television is a very localized culture, YouTube has made video content accessible beyond a country’s borders. Many entertainment companies like SM would announce global auditions and disseminate this information across their YouTube page. It has also allowed videos to become accessed and searched all within a few keystrokes.

So what are the implications of YouTube on the K-pop industry? As the international K-pop scene has started to keep a closer eye on various video watching statistics across different markets, YouTube has possibly become a place to test the efficacy of different concepts and sounds on a global scale. It has certainly been utilized more frequently by entertainment companies and broadcast networks with Mnet counting YouTube views as one factor in their music show award criteria. Eliciting participation from an international fandom continues to blur the lines for casual fans to ones that immerse themselves with their increased consumption power which can effect the success of their favorite idols. The authority of this platform for bridging the fan and the idol has grown, but it is not surprising that some singers utilize YouTube in a different manner. Amassing subscribers to follow their work before employing the attention and support to catapult them to audition or connect with the industry has become a fascinating avenue for how YouTube is effecting change on the K-pop industry.