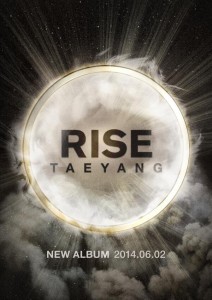 A couple of days ago, YG Entertainment began their trolling process of having people guess which artist will release music next. Would it finally be Winner‘s debut, would Psy come back, or even the new girl group? Well, the wait is over. We were all wrong.

The next artist to come back will be Big Bang‘s Taeyang!

Currently scheduled for June 2, — but we know how YG is — Taeyang will release a new album, Rise.  The announcement was made, rather fittingly, on Taeyang’s birth day. However, no further details have been provided, for now.

It remains to be seen what concept and style Taeyang will be returning with. We could either have the rebellious dance music, like “Ringa Linga,” or maybe a return to the R&B of “Wedding Dress.” Perhaps Taeyang may even rap more, since that’s his roots and we’ve been getting more glimpses of it on other tracks. Either way, there will likely be some shirtless shots and crazy hair.

Are you excited about the sun’s rise? Or are you disappointed that it’s not somebody else?