Walking Across Borders on "Funny or Die" 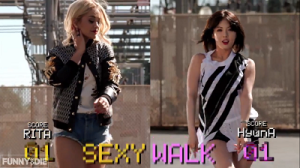 With the advent of global internet cultures, and the lowering of barriers to mass communications, savvy consumers have been privy to varied forms of media. Fittingly framing the aforementioned is website Funny or Die‘s recent April skit, featuring British singer Rita Ora, and Hyuna of 4minute. The two went head to head in a walking showdown, with 4minute’s “Whatcha Doin’ Today” serving as the backdrop to the catwalk duel. This comes after Funny or Die‘s first foray into the K-pop realm, which saw f(x) in a sketch across Anna Kendrick. Comparatively, these skits have transposed an East versus West binary to the Internet audience, and this agglomeration of two complex and dominant viewpoints has created an intriguing cross-cultural product.

Hyuna and Rita Ora’s piece can be viewed as establishing common ground among a cultural quirk. They’re pitted against each other as dueling pop stars whose walks define how capable they are. This sketch is less about being an outcast and more about finding a shared space. Their competitiveness reaches a compromise with the hug-it-out ending, but neither idol takes themselves too seriously in this piece. The concluding blooper where Hyuna  teaches Rita a bit of the dance routine is a fun touch, and it shows that dance is another point where cultures can meet across borders.

Meanwhile, f(x) and Anna Kendrick’s skit can be viewed as Funny or Die’s attempt at tackling the niche culture of K-pop. The girls are first portrayed as a foreign otherized entity, where Anna Kendrick is showcased as the outcast foreigner trying to gain acceptance as ‘Asia’s sweetheart.’ The ice is broken eventually as Anna Kendrick works to adapt through improving her Korean skills, mirroring f(x)’s dance moves, giving in to Victoria’s cup request, and playing Starcraft… However, if you break down the story into its components, it is about viewing another culture as foreign, acclimating to that culture, and resolving the situation by injecting Western flair. Ultimately, the collaboration reaches a conclusion after the development of an improved, acculturative signature dance move.

In observing prior K-pop collaborations with Westerners, struggles can arise in the creating of quality and/or respectful projects from such joint ventures. In Hyuna’s sketch, the Funny or Die team did a fair job of navigating the eccentricities of the artists’ respective cultures, to find a middle ground. That aside, the use of f(x)’s “Electric Shock” and 4minute’s “Whatcha Doin’ Today,” as dominant musical accompaniments, shows that K-pop is able to cross boundaries and transcend language barriers. While f(x)’s skit pointed out cultural differences in the rehearsal and fan culture aspects of pop stardom, Hyuna’s skit focused more on individual character. The “Girl, You Better Walk” sequence has pointed out cultural variance, but at the same time, it has been able to hone in on the shared pop normative experience of the catwalk.

Tropes that don’t quite work

The purpose of these collaborative works is to induce laughter. Humor, whether silly or serious, can be an effective tool when used well – it can stick with people for a long time. Sometimes it may miss the mark completely, and in Funny or Die’s case, the humor is a bit uneven. Funny or Die gets points for attempting to find a common ground to allow these stories to maintain a shred of truth verity. However, one major gripe present in both skits is the reliance on this trope of using language as an alienating factor. This cliché of clandestinely switching or using a different language to talk down about someone plays on a cultural insecurity. Is it an unfounded fear that when people converse in a different language, they must be talking smack about you? 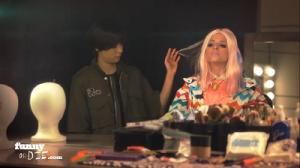 Another moot point is whether K-pop’s representation is still grounded as a niche and quirky subculture in both of these works. In f(x)’s skit, foreign culture and bizarre personalities take center stage to alienate Anna Kendrick. She seems especially displaced in the scene where Anna is in a strange costumed get-up. While wacky wardrobe choices are not limited to K-pop, the excessive gaudiness that Anna Kendrick undergoes is ridiculous, as Amber duly notes in the video. To a lesser degree, the off-kilter K-pop personality also occurs in the “Girl, You Better Walk” piece. Rita’s signature walks are almost predictable, with ‘Cake’, ‘Jump’, and ‘Late night walking to your car in a dark neighborhood’ walks making up the different folds of her repertoire. In contrast, Hyuna gets to represent herself with ‘Diamond Fantasy’, ‘Crazy’ and ‘Possessed’ walks. It would’ve been interesting to hear the inspiration behind these moves, but alas we’re only left with a competitive face-off where peculiarity is emphasized via Hyuna’s walking styles.

K-pop culture in the future

The above-mentioned begs the question: who is the intended or anticipated audience? The dual language subtitles signify an awareness of the international K-pop fandom, as well as the growing global presence of the genre. While the implications of K-pop’s presence on the world stage are still innumerable, it must be mentioned that considerable attention was given to Korean music — via the “K-pop Night Out” segment — at SXSW. All in all, I think these collaborations are a step towards trying to reach this ever-expanding K-pop mass. Even so, I do believe that there are plenty of unique ideas that would be exciting and funny to watch, aside from the typical East versus West binary or foreign language barrier clichés. Personally, I would love to see some K-variety games integrated into a joint skit. What ideas would you like to see Funny or Die or any other media publications tackle in regard to K-pop?