Side B: A More Mature Boyfriend 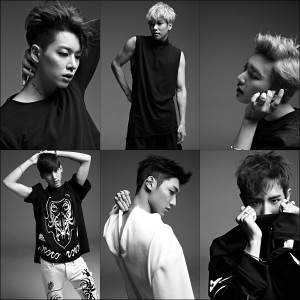 After a yearlong absence in Korea, the consistently cute boy group Boyfriend is finally on the verge of a comeback. The group has been known for being cute, but as they’ve grown up, so have their concepts. By the looks of the group’s latest teaser, Boyfriend has grown from boys to men. This has not been a sudden transition. Rather, the comeback is looking to be the culmination of a steady stream of more mature title tracks. While they’ve delved into their adorable stylistics with “On and On” and “Love Style” — as well as with their Japanese promos — these have only been momentary. Between the releases of “Don’t Touch My Girl” and “I Yah,” their maturity has been quite apparent.

Hidden amongst Boyfriend’s un-promoted tracks is a more mature group: not so much bubblegum pop, but more refined ear-candy. Let’s take a Side B journey with Boyfriend.

When Boyfriend debuted in 2011, they teamed up with Brave Brothers for their self-titled first single. This song was typical Brave Brothers fare: electronic dance music complete with the “It’s Brave.” “You and I” was by far the better track; it presented the guys’ mature sides (and has been a personal favorite of mine). Fortunately, this song was promoted it as well — it was a pleasant contrast.

However, it was the second single, Don’t Touch My Girl that marked the shift for the group. A lot of this can probably be attributed to the new producers and lyricists. From bringing together Don’t Touch My Girl, lyricist Song Soo-yoon and producers Sweetune became the go-to producers for the group. Since then, the two have participated in every subsequent release, and they’ve had a hand in maturing the group’s sound. If you haven’t heard “Little By Little” (which the group also promoted), you should give it a listen.

Although Love Style would signal the return of cuteness, complete with flowery jumper and pastels, it represented another shift for the group. Members Minwoo and Kwangmin had become lyricists. The rapper duo was credited for four of the five tracks on the album. As you can tell from the name, the album is all about love — it oozes ’80s pop, complete with heavy synthesizers. The nostalgia in the mini is fittingly dense, and we get to hear more of the group’s vocal abilities — Youngmin, in particular, is quite prominent here.

The stand-out track is “Wonderful Girl,” which is really catchy. Lyrically, the song talks about love at first sight, but the group portrays the feelings associated with love in a more mature fashion. It lacks the uplifting sweetness you’d expect.

Also on Love Style is the track “Do.” For this song, Boyfriend is pursuing a girl who is a little hard to get. With the “I do do do do…” chorus, it’s hard not to sing along. I do wonder if the innuendo in “I’m not just going to poke you and leave” was contemplated, because that’s a great line.

The last album, Janus (and its repackage, I Yah) has completed Boyfriend’s journey into maturity. With title tracks “Janus” and “I Yah,” we’ve seen a shift for the group: no longer just cute boys, but actual men. Boyfriend also show their versatility, both musically and lyrically. Not only do we have rock-inspired and acoustic pop tracks, we also have some angsty lyrics.

We see the older vocalists of the group show off their abilities in the form of solos. It’s difficult to single out the best track, since they’re all so different. Donghyun’s solo, “Listen,” is very reminiscent of tracks from the early 2000s. Jeongmin’s acoustic “My Dear” is a treat for the ears — the gentle sound is subtle and well-matched with Jeongmin’s lighter tonal quality. However, I think Hyunseong’s solo, “Trippin’,” takes the cake. The track is a pop-R&B hybrid with attitude. With a syncopated guitar rhythm, the song makes you move and groove along.

Just as picking a favorite solo is hard, it’s difficult to pick the best group tracks that have gone un-promoted. Nevertheless, two stand out a little bit more from the rest.

First, there’s “Standing With U” from the I Yah repackage. This was not something to be expected of Boyfriend. Even taking into account their maturity, the group doesn’t seem like the type to release rock music. The track really jumps out at the listener because of this. Thankfully, the group pulls it off. With enough ambiguity to either uplift or sadden the listener — lyrically — “Standing With U” makes for a versatile rendition. First-time listeners will surely find it stimulating — if not pleasing — from whichever angle they take to appreciating the track.

Then, there’s “Soulmate.” For a moment, it seems to be a song in Infinite‘s repertoire: 80s sound and angsty love lyrics. It’s a surprise to find that Sweetune has had no part in this. Instead, it’s a product of DK. The lyrics are by Song Soo-yoon, a lyricist that Boyfriend and Infinite share, so the similarities aren’t all that surprising. However, Boyfriend successfully makes the track their own.

Boyfriend seems to have shucked the happy-go-lucky, boy-in-love mold they’ve been known for; they’ve been coming back ‘stronger’ each time and they’re just now edging into different territory. This is not to say that Boyfriend are turning their backs to their cuter tropes — with a group name like that, it’s difficult to imagine them moving very far from their debut selves. However, as the shift toward deeper and darker material becomes more pronounced, listeners could be in for more changes in terms of Boyfriend’s sound.

I hope you’ve enjoyed this edition of Side B. What are you looking forward to seeing in Boyfriend’s comeback? Did I leave out any examples? Tell us in the comments section below!