"The Fatal Encounter:" Historical Drama and the Return of Hyun Bin 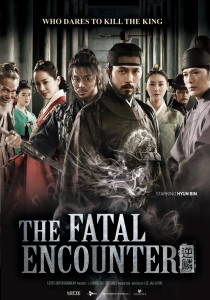 Note: this writer has endeavored to exclude story spoilers, so feel free to read it before watching the film.

On July 28th, 1777, King Jeong-jo, by happy accident, narrowly avoid an assassination attempt involving a killer hidden in his bedroom’s ceiling. Although this came to be one of the most famous attempts at his life, it certainly wasn’t the first one. In fact, Jeong-jo was nicknamed the “King of Misfortune” due to the frequency of the death threats. He ruled during a time of unrest between the political factions, and this led to great strife during his rule.

The film The Fatal Encounter is an interpretation of the king’s unfortunate history, and it looks specifically at that almost-fateful night in July. Although the situation has been dramatized by the film’s writers, the whole production has a thread of history running through it, making it real as well as engaging. Also accurate to history is the film’s portrayal of King Jeong-jo as a learned, diplomatic, moral man. Despite all of the trials he faced, he still managed to make significant reforms to aid his people.

Besides being a quality historical fiction film, The Fatal Encounter also marks the return of beloved actor Hyun Bin. After his renowned role in The Secret Garden, he enlisted in the army — in the time that he has been away, he has completed his mandatory duties with the Marine Corps. This movie marks his return to the scene, and it is one heck of a comeback! Hyun Bin makes a refined, respectable, and handsome king, to say the least. 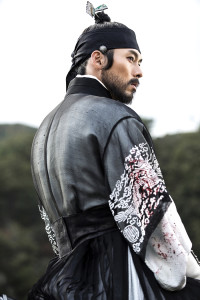 As a casual consumer, I would recommend this film to people who enjoy mainstream, Korean historical movies and dramas. If you’re looking for something more inspirational, more historically accurate, or more progressive, you may be disappointed with The Fatal Encounter. It has all the essential elements of court intrigue, conniving mothers, forbidden love, and epic sword fighting, but it doesn’t take the historical drama genre anywhere new. Thankfully, the director didn’t go in the soap-opera direction with the film. I’m fine with a little bit of extra dramatization, but if this story had been done any less sincerely it would’ve lost some of its poignancy. 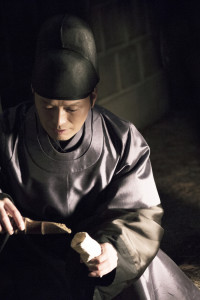 The structure of The Fatal Encounter is a nice change from the usual linear progression of events. The main plot of the movie happens within a single day and the scenes are organized by time — be it hours of the day or years that have passed. By using time as a reference point, the movie is able to jump around within the narrative without confusing the viewer. It also adds a sense of suspense because the impending night is being counted down and the viewer is made aware from the beginning of the film that an epic battle is going to occur. The sequencing of the scenes makes the movie less bland to watch, but to seasoned watchers of historical shows, the importance of this technique (to the story) may be arguable. Consumers who are in it for straight retellings of history, may find these time-jumps a hindrance.

Another element of the film that’s thoroughly enjoyable is the obvious efforts given to character development. Each character displays its own dynamism, and no one is one-dimensional. This is especially important in a historical film because it gives life to the past. Often, textbook historical figures come off as clinical and boring, but an important fact to note is that they were humans living in a different time. They possessed similar instincts and emotions, and they would’ve faced similar trials of love and friendship. A king is not an unfeeling figurehead, but a real person who may be keeping his true feelings at bay. 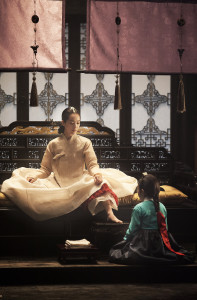 Finally, I also appreciate the cohesion of The Fatal Encounter. Even though the twists and turns keep you guessing, the plots are wrapped up neatly and satisfyingly at the end. There’s nothing worse than a good story that’s ruined by a lackluster ending – ahem, K-drama – so seeing a film in which closure is given, is quite refreshing. You can watch it knowing that no character has been left out of the conclusion, and no situations have gone unexplained.

The Fatal Encounter is a film that I expect to see a second time. The movie is rich with detail and I’m sure another sitting would help me — and the viewers — enjoy it better. The film has moments in which people appear to be like passing ships in the night; I can’t help but think of the subtleties that could’ve flown past me. The Fatal Encounter is visually gorgeous and I would jump at the opportunity to enjoy its aesthetics for another two hours. If you’re in a city that has showings of the film — and if you’re keen to see Hyun Bin in his comeback role — I encourage you to check it out.

Here’s a link for North American showings of The Fatal Encounter.