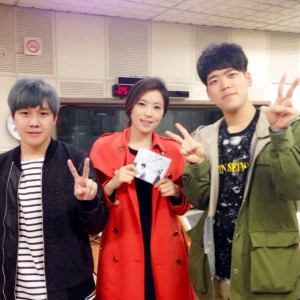 Welcome back, Indie Gem friends. This week we will be talking about electronic band Goldmund (골드문트).

Relatively new on the scene, Goldmund formed in 2013 with Kim Youngmin (a.k.a. Stray), producer and overall composer, and Kim Hyuntae, guitarist, lyricist and vocalist. The band takes their name from Hermann Hesse’s Narcissus and Goldmund, which is a story about two metaphorically opposed medieval men — a monk (the thinker) and a wanderer (the artist). Appropriately, it is this mix of thoughtfulness and passion, careful composition and raw sound that characterizes Goldmund’s reflexive music.

The duo released Unplanned Works in March of this year, and the EP shows that electronic music can be interesting and diverse in sound. There are so many Korean indie artists playing with electronic music that it’s hard not to be convinced of the genre’s diversity, but if you need another push, give Goldmund a listen. They do the popular ‘80s dance beats really well, but on top of that their musical layering intertwines a variety of moods, giving their songs a mature polish. Start to finish, Unplanned Works is a tight, complex album that is simultaneously fun and thought-provoking.

After the instrumental intro, the first track is “Signal Lost,” which combines dance beats with feelings of longing and searching. The most noticeable feature of the song is how the mixing builds through a push-and-pull with the instrumentation; even though the pulsing beat drops off at points, it never resets completely, making the song feel like one steady progression. It starts off relatively straightforward through the first verse, with the dance beats crescendoing at the chorus, but then they abruptly fall off, drawing attention to the guitar and tuning of Hyuntae’s voice. While the beat technically has to build again, it comes back stronger with a heavy downbeat, avoiding repetition and driving the rest of the song.

The clear contender for title track on the album is “Stereotype Lovesong (feat. Yukari),” which is Goldmund’s take on a love song. Upbeat from the beginning, the song pulls the listener in with its danceable rhythm. Hyuntae’s voice — deep in the other tracks — reaches into its higher register, giving a lighthearted feel to the overall sound. While Yukari’s voice is a welcome addition to the song, it is the overlapping vocals between her and Hyuntae that give the chorus its edge. The mixing in the chorus shows particular care, with both voices playing around the rhythm of the downbeat. The round-like quality of the lyrics makes the chorus sound like a conversation, which expands the scope of the love song to two people instead of one — the audience has to really listen if they want to catch the lyrics.

The title pokes fun at itself, while the lyrics remain sincere. The lyrics’ earnestness shows just how difficult it is to write a love song, when all words seem clichéd. After a particularly rousing section of dance-tastic beats, evocative of rushing emotions, the song reaches a satisfying clarity at the end with the last two sung lines, paired only with a little synthesized melody.

One of the most fun parts of Goldmund’s album is that it includes three remixed tracks from other guest artists. Instead of working as filler, the remixed tracks actually approach each song from a different angle, featuring interesting new talent and acting as a love letter to the art of remixing itself. Cabinett remixes “Stereotype Lovesong,” giving it a disco-spin. Another one I would suggest is the “Prism in the Snow” remix by Titan Slang, which plays with Hyuntae’s bold, melancholic voice, in conjunction with a light pipe-sound that brings a fresh twist to the track.

A personal favorite of mine off the album is “Heroes,” which has an epic, sweeping quality befitting its title. It’s got solid fun beats, but the guitar also melds with an electronic pattern that runs throughout, giving it a driving, almost 8-bit music feel. I must also admit that the song’s Final Fantasy reference might have won me over.

Here is the chorus:

Though Unplanned Works is Goldmund’s first album together, it demonstrates not only potential for the duo, but also their solid understanding of electronic mixing, where the concept of “mixing” permeates every facet of production; from instrumentation, to vocal interplay, to intertextual references, and on to collaborations with other artists. It is fun, it is dancey, but it is also smart, and that is something to really appreciate about Goldmund.

What do you think, readers? I have had Unplanned Works on repeat since March!