Why Tony Testa and K-pop Are a Bad Match 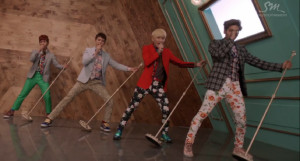 K-pop has always had much to offer, but as a dancer, it’s the dancing aspects of the genre that drew me in initially. Even though there are some Western pop artists who do dance, it’s slim pickings and of a different variety. The high energy of K-pop choreography is the kind that grabs your attention and never lets go.

That’s perhaps why I favor SM Entertainment artists so much. I listen to groups from many other companies as well, with many equally talented dancers, but SM has the largest boy band roster (my preference for male groups is undeniably informed by their female counterparts’ lack of consistently good choreography) so it’s no surprise that I cling so strongly to them.

So, as anyone can imagine, when SM announced their newfound relationship with dancer and choreographer Tony Testa, I was jittery with excitement. However, as the years have passed, that enthusiasm has deteriorated completely. It’s come to the point that at the announcement of any SM artist comeback, I’ve come to dread the news of choreographer behind it, in fear that it will be him. I get irritated at the mere mention of his name, but I can’t say that I hate his work per se. In fact, I can understand SM’s decision to work with him, or at least comprehend the idea behind that decision.

As of late, SM has been heavily promoting what they call their “performance” genre. (Hell, they even had a project dance unit called SM the Performance.) Essentially, it refers to the persistent use of electronic dance tracks, with visually interesting concepts and choreography, to pair and thus puts the performance aspect over other such things as lyrical nuance or musical experimentation. It’s the perfect idea for a company that has so many groups; it shows their little desire to be creative, versus their means to capitalize on the visual aspect of K-pop.

In essence, Tony Testa’s choreography style matches perfectly with SM’s “performance” genre. It’s always aesthetically interesting and different, making performances prominent and memorable. DBSK‘s “Something” had the ropes; Shinee‘s “Dream Girl” had microphone stands; and Exo‘s “Wolf” had the tree. With repetitive watching — because the performances are that intriguing, but also because we’re all irrational fans — even the worst of songs can become sticky, making SM’s plan genius for its inevitable success.

Unfortunately, from a technical perspective, Testa’s choreography is hard to stomach because it tends to be awkward and clunky. A perfect example is DBSK’s “Catch Me.” While everyone remembers it for the epic lit-up Hulk arm, what will always get me is one of the first moves at the beginning. After Yunho and Changmin complete their little reflective tête-à-tête until they’re kneeling on the ground, they jump up then come forward again mirroring one another. But they’re moving the same arm and leg at once, which is an awkward motion considering it’s opposite the natural gait of swinging the opposite arm of the leg with which one steps.

Testa also relies heavily on gimmicks, such as the aforementioned Hulk arm. While something different in the performance is great to set a group apart, his more recent use of props or literal interpretation of concepts is simply too much. While Exo’s tree in “Wolf” was fantastic from an aesthetic perspective — while perfectly tying into their whole magical legend concept — the literal interpretation of the wolf concept was a sign that it’d gone too far. The song was already heavy-handed with its overdose of howling and layering; it didn’t help that Testa had to choreograph the members literally scratching themselves, in addition to making them mime wolf ears with their hands, pretending to be a wolf mouth with their arms. Reread that sentence and don’t tell me that that doesn’t sound stupid. And all of this is merely from the spectator angle.

Looking at the idols who have to perform this is even more painful. Testa’s choreography typically involves jumps, physically, strenuous steps, as well as complicated moves that are not conducive to the performance of a K-pop idol. His success with Western artists makes sense because these performers tend to strut charismatically while singing, and reserve the actual dancing for dance breaks. Idols, on the other hand, are constantly dancing and singing at the same time, a combo already hard enough to do without the stresses of physically taxing choreography.

It’s no surprise that Exo spent most of their “Wolf” promotions lip-syncing instead of actually singing live. The boys aren’t veterans of K-pop, and the fluidity of their dancing and singing coordinations aren’t exactly ideal for Testa’s choreography. Even though fans begged for more live singing, I’m sure none of us would’ve enjoyed hearing their heavy breathing as they struggled to hit the notes and keep in step.

Some seasoned artists have also struggled with Testa’s dances. Shinee definitely struggled with “Everybody.” Aside from so many of the awkward dance moves, they actually had to throw Taemin in the air. Sure, it looks cool, but it just sounds ridiculous when one thinks about the fact that it was the first step, leaving them to try to catch their breaths for the remainder of the song. Again, it’s no wonder Onew injured his neck during promotions. It’s surprising that no one else was hurt.

Overall, it’s really just a waste. With the demands of Testa’s choreography, the idols sometimes look more like they’re working out to the beat of music rather than dancing. The intricacies of dance are lost in the exaggerated motions of his choreography, which is disappointing when we know how skilled these idols are. The choreography of “Catch Me,” for instance, is such a letdown when one compares it to other dances that actually showcase DBSK’s skill — one such performance is for the repackaged “Humanoids” (choreographed by NappyTabs). In a similar vein, compare “Wolf” to Exo’s repackaged “Growl” (choreographed by Nick Bass).

This isn’t to say that Tony Testa hasn’t given us some great work. “Sherlock” will always be one of my favorite dances. Testa’s usage of contagions was spot-on, and the timing was wonderful, but this is an exception. In hindsight, the dance has balanced subtlety, as in their hand movements and energy. That balance is why “Dream Girl” is also somewhat acceptable, because many of its moves have been recycled from “Sherlock.” “Sherlock” represents Tony Testa’s first foray into K-pop dance, and the guy has not outdone himself even up to this point.

If Testa goes back to that more refined style of choreography, I’m all for it. He can stay on with SM if he’s going to create detailed dances like “Sherlock,” but as it stands, that does not at all seem to be the direction he is heading. While he veers off course, I have to put my foot down and say that Tony Testa’s relationship with K-pop needs to end; it’s not working anymore. It may have gotten off to a good start, but that has since petered out — isn’t that how all relationships go?

Exo is making their comeback with single “Overdose,” with Testa’s choreography again, and I have to say that I want to turn and run in the opposite direction, even though I know I’m going to eat it up like the Exo fan that I am. But I’m also practically waiting for news that D.O has been crushed during practice, and I just don’t like living with that fear. Do you?