Block B Hits the "Jackpot" on Insanity

Despite their image taking more hits than Mike Tyson, Block B still comes back. With each release, the group gets more confident in their lyrics and more out-there with the concepts. Coinciding with their third anniversary, Block B has unleashed their craziness on the masses with “Jackpot.”

Zico has one again teamed up with Poptime to produce an exciting song that will get you moving. Zico has been experimenting musically for quite some time. This time swing makes an appearance.

It wouldn’t be a Block B song without Zico letting us know it’s his song, or his part. He also is keen on giving shout outs to whomever else produces the track. Kudos to him, but even as a BBC, it’s just a bit annoying for Zico to say his name in a bunch of songs. Especially considering most know he produces or takes part in the majority of Block B’s songs. We get it already.

A loud, upbeat track, “Jackpot” is simply fun in sound. “Jackpot” incorporates traditional swing instrumentation, such as full brass – trumpets, trombones, and tuba – and a piano, and then adds other instruments. For sure, there is a marimba being played during the opening verses. Who uses marimbas? The bass line is used, particularly during Kyung’s rap, as a friendly reminder that this is still a Block B song. By dropping all non-bass instrumentation at that point, the hip-hop effect suddenly appears. It’s not Block B without some hip-hop. The highlight of the song is the chorus. Lead by Taeil’s impeccable voice and full brass instruments, the chorus is joyful and robust.

There is a rather unusual transition between the chorus and bridge sections. It’s hard to put your finger on exactly what’s awkward about the transition, but there seems to be a bit of disconnect. This is most likely due to subtle beat changes during the song. From slow, to fast, then repeat, the beat differs throughout makes it a bit chaotic. Perhaps this was done intentionally to fit a chaotic concept.

Beneath the fun tones lies a strong message: the best revenge is to live happily and be successful. The group will keep working hard and fully till they hit their jackpot. 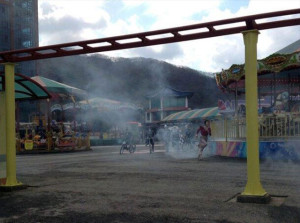 Imagine you are in a smoky amusement park, when suddenly the clown manikins come to life and begin chasing you. Sounds absolutely frightening, right? Block B takes all your nightmares and turns them into terrifyingly funny mayhem. Most of us would surely have passed out too, if some creepy guy in a clown mask suddenly popped up behind us. Starting off with a Looney Toons-like introduction, complete with a sinister laugh and trepid piano, “Jackpot” is weird and insane. There’s no other way to put it.

“Jackpot” exhibits the same level of entertaining insanity we’ve seen since “Nillili Mambo.” The eccentricity of the group is so apparent, that’s it’s overwhelming at some points. In between P.O eating a beetle, Taeil being bribed by a lollipop, and U-Kwon doing his best Edward Scissorhands impression, the MV for “Jackpot” is craziness. Set with a freak show of a carnival backdrop, it’s the things of nightmares. Who would want someone as silly as Kyung throwing knives at them? Or, who would enjoy the thought of being messed with, while sleeping, by a bunch of strange men? About the only thing not nightmare-worthy is B-Bomb dressing you in different outfits and being escorted by Jaehyo.

On an uplifting note, U-Kwon actually gets to hit someone. He doesn’t get beat up. Progress has been made. 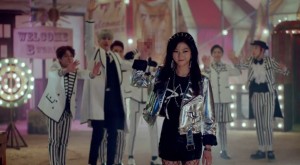 Child actress Kim Sae-ron, of The Man from Nowhere fame, makes an appearance as the female lead. Wow, she has grown. But, don’t worry, there’s no love-line or any inappropriate plot point. The boys just seek to terrify her and treat her like a toy. After all, “Those oppas are weird.” Additionally, it has been clarified that Sae-ron didn’t actually flip Block B the bird. The boys don’t just troll on shows; they also troll in their MVs.

If you have a fear of clowns, this probably isn’t the MV for you. “Jackpot” raises a visceral reaction of being creeped out. Even those accustomed to the group’s antics could find the MV a bit unnerving. However, it will be chalked up to Block B being Block B. With 7 members, of 7 Seasons, and 7 albums, Block B has hit the jackpot. While probably not the best title track Block B has released, “Jackpot” is still quality and fun.