4D Performances: More Than the Usual Song and Dance 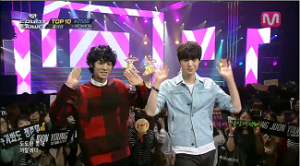 Music shows are a prominent aspect of major K-pop comebacks and debuts. Although the live aspect of these shows can be heavily controlled by entertainment companies or broadcast networks, there can be some hijinks that give added incentives for fans to watch. Exceeding or just aiming to showcase some variety in performances can make some idol groups stand out. Often these multifaceted components help with shaping a group’s identity and the promoted songs will attain longevity on the charts.

K-pop consumption can be likened to a packaged set at times. The performance aspect of it fluctuates very slightly in terms of styling or staging, but the individual parts will usually remain constant throughout a promotional cycle. This is not necessarily a bad thing. Idols work countless hours, so showcasing their devotion to perfection during performance times can be great. For other idols who may not always be as technically refined, adding fan service or nuances can be helpful in giving their performances character and in growing their fan base.

Recently, Orange Caramel has brought a lot of dimensions to their “Catallena” performances. Some music shows have prominently featured guests take on their distinctive dance. Their wide-eyed playful characters and zany wardrobe take unexpected turns with each new stage. Their current concept may be of the fishy kind, but their dresses often don other food groups – making each performance noteworthy for imploring a gimmicky dress.

Also, since the release of the dance version of their MV, they have been including a specialized part at the beginning of their weekly show stages. Personalized screams from each member fill in the pocket of the instrumental introduction. Their added contributions are organic and jolting at first scream. Their characters are electric as they provide humor to a concept that would not work as well with a inflexible dance. It certainly suits the bizarreness of their group and is important for actively injecting a different type of dimension to their performance.

One group that has slowly seen a shift from their more dance pop days is MBLAQ. Originally, their title tracks like “Y” and “Mona Lisa” featured a higher BPM where the dance was a focal point. As their image started to mature, the focus became centered on the artistic and musical autonomy of the group. The members started to write and produce more music. Even during special stages, some members would contribute piano riffs and devote time to adding special qualities to their performance. During their “This is War” promotions, Lee Joon played up his solo gun shot moment – even in live radio shows.

An important part of their tonal shift comes with exhibiting the depth of their live abilities. Their MBC Picnic performances coupled them with a band to highlight a different color of the group. They were rocking out to their hits, and the focus was not solely on presenting this concept, but it was on energizing and making the crowd move. Their leader Seungho was jamming along to the band on the piano. Their vocals were grungier and Mir played up to the crowd. These renditions of their songs fit well with the image MBLAQ is moving towards with their recent releases, “Smoky Girl” and “Be a Man.” These live elements underscore MBLAQ with a maturity and confidence from being an experienced K-pop group.

While the different dimensions of a group can come into play with changing up the live formula, adding variables to the performance can give a song quite the longevity on the charts. Take 4Minute’s “What’s Your Name?” promotions as an example of this. The group was seeing greater reception to their song, so they added unexpected guests and/or a contemporaneously relevant aesthetic appeal to give their song legs on the chart. Their song amassed a lot of earned buzz from these different features.  They hit number one a few weeks after their release and the song became the 6th biggest hit of the year. Also, adding on special guests brought out a stronger sense of personality from the girls. It was great to see them add their own flavor, and it made each stage during their promotional cycle an event to catch. 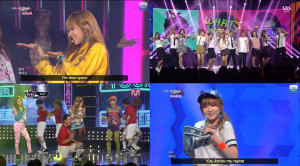 While K-pop has always had its fair share of bizarre moments, live performances can be something fans can dismiss as being almost exactly the same with each iteration. Being kept in boxes and dancing the same old routine can become trite. Hence, it is quite refreshing to see groups gain autonomy over aspects their company may not always control. Bringing on personalities that fans fall in love with into music shows is needed. Nuances that are atypical help to make K-pop a unique phenomenon that is both cultural and ever evolving.