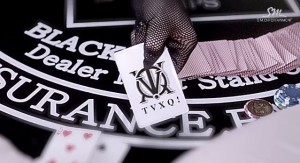 The beginning of 2014 is proving to be a popular time for the heavy-hitters of K-pop to make their presence known, à la 2NE1, Girls’ Generation as well as TVXQ. With these three groups all releasing a new single in the last week of February, it will be entertaining to see the showdown that is bound to take place on music shows. That said, I’m surprised SM has decided to coincide Girls’ Generation’s comeback with TVXQ’s follow-up single. Then again, maybe it has nothing to do with TVXQ, and everything to do with the pissing contest with YG.

In any case, “Spellbound” is the follow-up track to “Something”, and it further explores the new artistic direction that TVXQ has been trying out with their comeback. The song is of the soul funk genre, and encompasses the same jazzy swing-dance vibe of their previous release. True to its name, “Spellbound” is about how a man who didn’t believe in love before, suddenly finds himself constantly thinking of his lover and is akin to being put under a spell.

While the MV has utilized the one-shot filming style that proved effective in EXO’s “Growl”, the result has taken on a slighty cleaner effect for TVXQ’s case. Since there are only 2 members in TVXQ, the one-shot style allows room for the choreography to deviate from the norm, and also for different ways for each member to enter and exit the scene for his time in the spotlight. Although the MV didn’t have a particular storyline or plot which is expected of most SM MVs, the unique filming style, combined with the alternate emphasis on the individual and team, on choreography and close-ups, ensured that the MV didn’t get too boring at any one time. Yes, it’s widely known that they are impeccable in their dance execution, but they also surprisingly engaged the camera well during their close-ups, showcasing their cheeky facial expressions. Something that did strike me as a little off, was the weird zoom-in and zoom-out that the cameras kept doing, which was a bit jarring in this one-shot video. 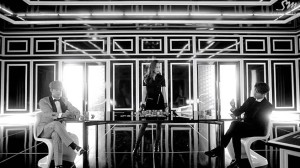 This time, SM is not even going to hide the fact that the MV was indeed filmed in one box. The one and only setting of the MV is a black-and-white tiled casino room, where Yunho and Changmin take on the roles of high-rollers, gambling their money (0r heart) away. Basically, love is being likened to gambling. Once you’re in, there’s no way out of this addiction. The constant whispering of ‘Suri suri masuri susuri saba’ (Korean equivalent of Abracadabra) is akin to the incantation of this magical thing called love. Once the spell has been casted, you can only fall deeper and deeper, to the point of it dictating your every thought and action.

The MV starts off in grayscale, and but even when it changes to colour, the colour palette still features mainly black and white. The females dancers are dressed in black, possibly making the case that the women are the spellcasters since black seems to be the universal colour for magicians and wizards/witches alike (Harry Potter throwback anyone?). In contrast, Yunho and Changmin are dressed in white suits, to represent their innocence and youth when they fell in love. Safe to say, there are no questionable wardrobe choices this time round, though I’m questioning why Changmin has a band on his arm. 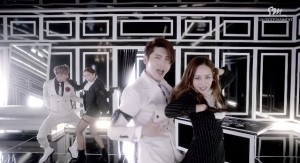 Nappytabs, who also choreographed “Humanoids”, is the mastermind behind this piece, which explains the stylistic similarities between the routines. With two people in the group, there is not much of an opportunity to play around with different formations. However, Nappytabs tends to utilize this formation for TVXQ —  rotating the members in the foreground and background, instead of always keeping the two in the centre. And this works especially well with the one-shot style, since it allows room for the duo to work the entire space on set, on and off-camera.

To tie in with the song, the dance moves also incorporated a lot of magician-like moves, such as mime as well as jazz hands. There’s also a inordinate amount of focus on the backup dancers and their expressions, which has never been the case before for TVXQ’s MVs. It’s probably also related to how it’s the first time TVXQ have included a couple dance in their choreography, possibly to bring light to the fact that love takes two to tango. The inclusion of the cards and table as part of the choreography adds a dash of fun, though it’s nowhere as cool as the strings in “Something”. Still, the choreography is still fun, and challenging enough for long-time sunbaes such as TVXQ. 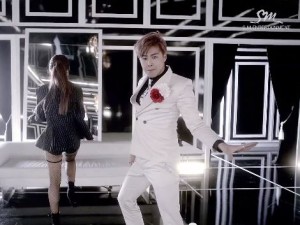 With their recent releases “Something” and “Spellbound”, it’s apparent that TVXQ is gunning for a change in style and image. These two MVs are probably the first ever of TVXQ to feature female backup dancers. Heck, in this MV, you don’t even see any of their regular male backup dancers, whom fans have come to recognize. In fact, the dance moves are also scaling less towards hard-hitting moves, and Yunho seems to be especially effeminate in pulling off some of those moves.

The male backup dancers are usually there to reinforce the powerful and masculine image of TVXQ. However, their tenth anniversary comebacks are driving their masculine image in a different direction. Instead of showcasing power, the MVs are showing off a playful, sensual and Casanova side of their masculinity.

While I personally do prefer TVXQ’s powerful image, I do appreciate this new style from the two of them, even if some people think that it’s a waste of TVXQ’s potential. It’s such a joy watching their MVs and performances, when the two of them actually have facial expressions other than ‘fierce’.  Yes, it’s a departure from their usual image, but kudos to them for willing to take some risks and having fun during the process. 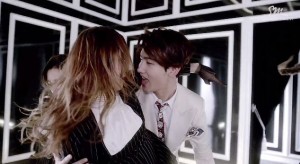 Jazz and swing is not an easy style for male idol groups to undertake, and I’m sure fans have a mixed response to this change of style for TVXQ. While we might not all be on the same boat with regards to this switch, I think credit should be given when it’s due, and I respect TVXQ for moving away from their tried-and-tested formula, and out of their comfort zone. Yes, this MV is still in a box, but what goes on in the box was taken to a whole different level.

TVXQ’s capabilities are widely recognized, so instead of needing to prove how amazing they are, they have the option of targeting their efforts to broaden their musical direction. This is a privilege that only a handful of longer-running idol groups have, and TVXQ has wisely decided to make use of it. Successful or not, I applaud them for taking ths risk.

Is this the best that TVXQ has to offer? Well, no. But was there anything specifically that turned me off? Not really. And I think they deserve extra brownies points for thinking out of the (SM) box in many different aspects. I rate this MV 3.3/5.

Along with this track, TVXQ also released two solo tracks, both composed individually by the soloist — Yunho’s “November With Love”, as well as Changmin’s “Heaven’s Day” (refers to how he enjoys filming with ladies?).

Are you readers also spellbound by this MV?