Side B: It's a 4Minute World 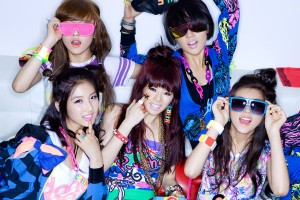 Are you ready for 4Minute?

We’ve only got a small ways to go before 4Minute’s return on 17 March. Their last Korean promotions were for “What’s Your Name?” and “Is It Poppin?,” the former being the biggest hit from the quintet under Cube Entertainment. The five ladies debuted in 2009 – a year that will be remembered for its amazing debuts, addictive songs and cemented ‘classics’ (“Gee,” “Sorry Sorry” and “Heartbreaker” anyone?). 2009 also brought about two of the most monumental scandals in recent K-pop years — these shall remain unnamed.

While 4Minute’s debut was hyped for some time as the grand debut of previous Wonder Girl’s member Hyuna, they didn’t hit the ground running like some of their contemporaries. From tracks that took some getting used to, and the disadvantage of a company focusing on debuting two groups that year, it’s understandable why some may have written them out. Despite this, 4Minute continued to improve with tracks such as “HuH” and “Volume Up.” It took a while for the group to find their sea legs but they hit their stride with some prominent releases last year.

With their comeback on the horizon, there’s no better time to look back at some of their best un-promoted tracks.

In retrospect, it was probably this track from their first mini-album that defined 4Minute for me. This song and its following demonstrated the group’s talent and popularity. “Funny” was also the first song that really laid out the 4Minute’s key traits: playful, spunky, slightly flirty and with a touch of sass. This beat is one of my favorites from their earlier releases; it’s teasing nature and snarky lyrics are a highlight of For Muzik.

Another track from their first mini, “I Won’t Give You” is a mid-tempo track that displays the group in its most laidback state (albeit in 2009). The song shows signs of experimentation, in terms of discovering what sound — apart from energy-filled tracks — works best for the group. A familiar tone opens the song, before the synth and beats kick in, keeping the listener locked in to the beat. The ladies deliver the song well, and not even Hyuna’s polarizing raps could detract from the song. This tune also highlighted the need for a 2Yoon unit, as the duo successfully carry the majority of the song.

It is my personal belief that Hit Your Heart is 4Minute’s best mini-album — each tracks features the traits I’ve come to associate the group with. From the addictive synth, to the MIDI that provides some deviation during the soaring chorus, “Invitation” is a song that stands out in their discography. Not even the atypical lol-tastic effect of Hyuna’s rap could make me hate the song. In fact, this may be one example that shows the well-thought use of her ‘raps.’ Let’s be honest, the girl is not the best – or anywhere close, really – to being a rapper, but this song gets it just right. Her flirty taunting is used fittingly in this track, as well as in the rest of the mini.

In fact, HuH-era Hyuna was probably the best we’d ever seen of the 4Minute rapper.

Another song from their infectious Hit Your Heart mini is “Bababa” — don’t let the silly title confuse you or turn you off. This is 4Minute being cute, but not vomit-inducingly so. It’s playful with a touch of sass, which is a trait that’s inherent in all 4Minute songs. This may be the song you rock out to in secret, or the one you blast during road trips. Either way, this song is encore-worthy material. You can sway back and forth with it and at the end, it just makes you feel light-hearted. It’s an instant pick-me-upper, like a little ray of sunshine in the form of a song.

Ballads are not something 4Minute is known for and that’s understandable. While they have two very capable and passionate singers in their vocal line-up (Ji-yoon and Ga-yoon), Hyuna is Hyuna, So-hyun’s voice is better suited for their energetic and spunky tracks, and Ji-hyun’s voice is wispy and light and that would not serve well in a power ballad that is the trend in K-pop. And that’s why “I’m Ok” works. It’s a mid-tempo song at best, but for 4Minute, this is evidently toned down in comparison to a majority of their repertoire. Everything in this track works and plays to their strengths.

“Whatever,” Name is 4Minute

No list of 4Minute’s best B-sides would be complete without this song. The girls performed to “Whatever” during their comeback stages of “What’s Your Name?” It is what has come to define the main themes of K-pop in 2012: a hybrid of different sounds all in one track. But with this song, it actually works. Yes, the transitions are sudden, but one is inclined to tap repeat as the song winds down. It’s not only apparent how much So-hyun’s voice has grown since her debut, but with each transition, the song is elevated to a whole new level with its sass and playfulness. “Tell me how you want it boy/ I can do whatever/ I can be whatever” had every listener asking “What?” Is this a veiled teasing of some grown-up topics, or is it alluding to the song itself, saying they can do whatever they want with it? No matter what you think the song is about, it’s a no-brainer that this song is everything 4Minute and more.

These are just a few of their stand out B-sides. Have we missed out any of your favourites? Tell us, and let us know what you’re excited to see 4Minute return with!