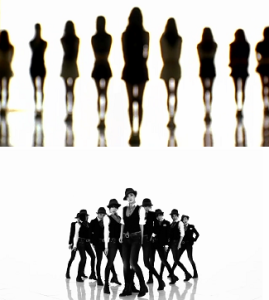 When a company builds their idol’s concepts, the core ideas have to somewhat relate to the song or music they are promoting. It would certainly be nonsensical to connect differing ideas like hypothetically a ‘hard tough title’ with a ‘cute aegyo concept’ – that would not work for me, unless it were comical or ironic. Also, not all groups have song titles that are easily discernible as to where the association lies, nor are song title translations perfect.

Nonetheless, if we look at certain artist’s title songs, we can see the transformation or intent of their concepts in their song titles. Of course, images are more complex than a song name. The musical aspects, dance, MV, clothing, etc. all culminate in building an image, but looking at song titles is still worthwhile in analyzing gradual shifts in idol concepts.

Girls’ Generation have a very identifiable image. Part of their success arise from a fully realized package. From the early days of their debut, songs such as “Into the New World”, “Kissing You”, “Baby Baby”, and “Gee” conveyed the aegyo, youth, and innocence ideals. “Into the New World” was their debut track. The titled phrase brought about the idea of  entering a new moment.

Alternatively, it can also be related to birth, the words of which would fit their later promoted song, “Baby Baby.” Cute images are often akin to baby or youthful affiliation. “Gee” is a seemingly random, nonsensical word. However, it is an expression a(n innocen) young girl might say, so the associations will also fall under the cute or youth category – of course that song would later become one of the most recognized K-pop songs of the decade. The song titles of this era were specific in ushering Girls’ Generation as the pure idols.

Their next generation of songs represent the transition period between their young image and establishing a more mature Girls’ Generation. Of particular interest were their promotions for “Oh!” and “Run Devil Run.” They kept the aegyo concept intact for “Oh!” using another simplistic expression to transmit the idea of innocence. However, their juxtaposition between that song and “Run Devil Run” was jarring for their fans. “Run Devil Run” was a major departure to a more mature and dark association. It is definitely a title that still stands out for how radically it was against the typical Girls’ Generation image. 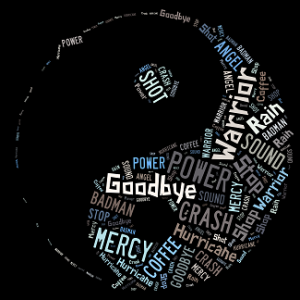 The most recent era of titles has seen Girls’ Generation pivot their image around the male gender. Titles like “The Boys,” “Mr. Taxi,” “I Got a Boy,” and “Mr. Mr.” are attempts at defining the girls as mature by acknowledging their growing interest in a significant other. The concept the girls are assuming is as the ideal woman of the boys or misters out there.

B.A.P is another artist with a noticeable change in their song titles since their debut. They started off with a strong image reinforced through their song titles “Warrior”, “Power”, and “No Mercy.” The group wanted to promote an indomitable spirit and concept that was fighting against the system. It was one image aligned across all their promotions throughout their debut year in 2012.

More recently, their image has been undergoing a gradual change. Song titles such as “Rain Sound”, “Coffee Shop”, and “1004 (Angel)” have been intermixed against titles more representative of their debut days such as “One Shot” or “Badman.” This difference in their usage of words in their titles mark a directional change from one of anti-systemic rebels to one of reflective emotional beings. B.A.P are creating a duality in their image. They want to incorporate a softer stance that will be less grating to the masses. Looking forward, they will probably move between these differing ideals in their future title tracks. 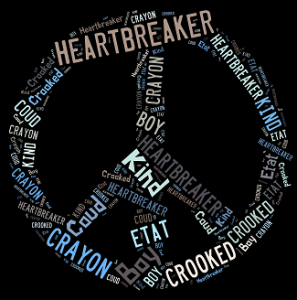 I also wanted to do a last and quick analysis on G-Dragon because his title song shifts are quite unique. His release history is dense because many of songs chart highly regardless of whether they were promoted as a single or not. Among his promoted tracks, there still exists a transition. He started off with titles with emotional depth and love such as “Heartbreaker” and “A Boy.”

He moves into a different era where “One of a Kind” and “Crayon” attempt to establish G-Dragon as a unique, almost bizarre personality. Finally, he takes on that quirky tortured artist image completely with “Crooked” and “Coup D’Etat”, fully enveloping his character as being someone who is different and willing to go against the system.

Song titles are great for reinforcing an image or concept. They are what we consume when we download, and what we search for across different sites. As we continually listen, write, or see these song titles, we relate certain notions with them and in relation to the idols who promote it. Therefore, these song titles are of importance in idealizing what associations an artist will have in a long term way.

Which artist’s song titles, and in relation their image, do you think has changed the most from their debut? Are there some title tracks that are named so ridiculously, no image could ever satisfy it?

(Images via SM Entertainment and Tagxedo)