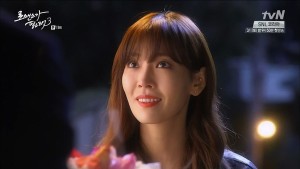 In dramas, there a few universal truths. Nice guys always finish last. All relationships are love squares. Mothers must despise their son’s choice of girlfriend. And the female characters are the most poorly written.

For years, women in dramas have had two basic flavors: poor and plain Jane, or beautiful rich bitch. There are exceptions, but they usually aren’t as successful. For every City Hunter, there are three Boys Over Flowers.  This is why the massive popularity of ­I Need Romance 3 and You Who Came from the Stars can only be described as a miracle. The writing, especially of the female characters, made these dramas. Standard cliches are tossed in favor of realistic characters. Both dramas present female leads who clash against the trend encouraging passive, likable female leads. What makes these characters different?

In I Need Romance, Min-jung is a glamorous single woman who’s completely independent and wants to remains so, even after getting pregnant. She likes her baby’s father, but she’s held on to her freedom for so long that she can’t fathom giving it up. Her dilemma of wanting to retain her independence, even with the knowledge that it might not be the best idea is something everyone can understand. No one relishes the thought of altering yourself for someone else, and that can run from major events like pregnancy to keeping Saturdays free for coffee.

You Who Came from the Stars‘ Se-mi is the perpetual second lead, always in Song-yi’s shadow. She’s resentful, but not bold enough to seek more. She still considers Song-yi a friend, which complicates things further. Even as she rises to superstardom, she’s filled with malicious glee at seeing Song-yi fail as well as guilt for feeling malicious. Nonetheless, her tumultuous emotions are what make her into a genuine, sympathetic person. Of course, as fabulous as Min-jung and Se-mi are, the most well-written characters in both dramas are undeniably the leads. 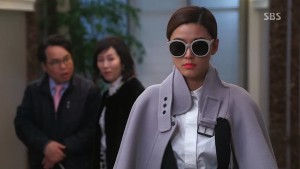 Cheon Song-yi and Shin Joo-yeon are the polar opposites of standard drama heroines. They’re wealthy, worldly, and respected at their jobs. According to the cliche, drama heroines are supposed to be sweet, loyal, unkempt beauties, not callous heartbreakers with a glass full of couple rings like Song-yi and Joo-yeon. They’re certainly not to be so vain that they choose an apartment for the view of a massive billboard of their own face. Yet, that’s what make them so relatable. Everyone knows a Song-yi or a Joo-yeon, flaws and all.

Joo-yeon is a cynical workaholic who doesn’t understand people, including herself. She has no idea how to be an actual friend, or even how to sort out her own emotions. She’s thrown her body and soul into her job because she’s good at it, and thus feels it’s more worthy of her time. At the same time, she acknowledges her failings and is actively trying to be a better person. She may not always succeed, but her attempts are easily the most endearing thing about her. She’s a driven perfectionist, and it applies to everything in her life.

In any other drama, Song-yi would be the villain. She’s the top actress in Korea with an ego the size of China. Before she goes to confront anyone over anything, she glams herself up to the nines. Song-yi is vain and indulgent, but is nonetheless likable because she has actual reasons for her behavior. She’s not shallow and vain for the purpose of being shallow and vain. She likes to see her face on billboards because it validates her hard work. She worked her ass off to become a top star, and has no issue with enjoying the perks of said stardom. Song-yi also has the rare quality of untempered ambition. Unlike Se-mi, Song-yi is willing to risk failure or humiliation if that’s what needs to be done to achieve her goals. 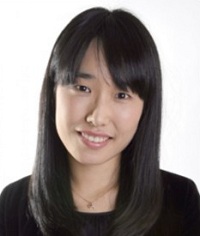 Park Ji-eun and Jung Hyun-jung  are the writers behind You Who Came from the Stars and I Need Romance 3, respectively. These dramas aren’t a change in style for either of them. They have always written their female characters as complex people instead of idealized cliches.  However, their successes with their current dramas are unprecedented. Park’s previous drama, You Who Rolled in Unexpectedly, got high ratings, but it faded from the popular consciousness almost as soon as it ended. Jung wrote both previous installments of the I Need Romance series, but I Need Romance 3 has earned distinction as the best of the series.

There has been a serious and unexpected change in the wind. After all, SNSD started dating and the world didn’t end. The ladies of K-pop have started singing about more serious topics than first loves and break-ups. Dramas starring complex female characters are the smash hits of the season. I’m not sure what demon lord caused this, but I’d really like to know where to send the fruit basket.

(images via tvN and SBS)