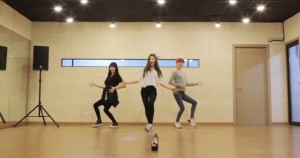 Dance practice videos have become a standard in K-pop, which is partially why it seems surprising to be asking for views before they are released. For the budding amateur dancer, it’s the most accurate source of learning the right moves. For the dance aficionado or enthusiastic fan, it’s the only true way to grasp the complexity, synchronization and individualization of choreography.

These videos come with a kind of vernacular culture embedded, meaning they’re often purposefully shot in an “amateur” way, very similarly to the many K-pop dance covers on YouTube. There’s usually very little editing in dance practice videos, and it’s almost always done in one take with a stationary shot. The idols often wear simple workout clothes rather than their costumes, which means they’re easy to produce and post online.

For example, Orange Caramel‘s recently released dance practice of “Catallena” showcases their silly sides and makes them seem more relatable; a high-heeled shoe functions as their marker for the middle of the stage. For an environment often teeming with glitz and glamour, the dance practice makes idols seem more within our grasp. These videos are essentially a kind of fanservice, which makes it seem surprising when fans are asked to refresh videos in order to receive the highly desired and easily manufactured dance practice. Most groups (or solo singers that perform choreography) release dance practices of their singles a short time after the song is released with little fanfare. So why did SM and WM ask for views rather than just posting the videos? 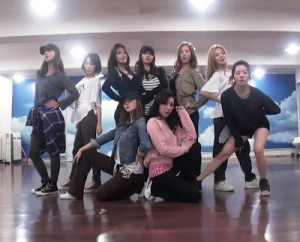 For the companies, it is an obvious way of increasing fan engagement in a profitable way. SM has a good track record with fans and YouTube participation, and B1A4 has a significantly smaller but devoted fanbase of BANAs. By directly soliciting fans, it strengthens the relationship between the fan and the company/group. As fans, we can feel like we have something concrete to work towards and like we have the chance to help our idols, with the added bonus of a dance practice video at a certain milestone view count.

However, it should also be noted that fans already work to increase views on MVs for group anniversaries and members’ birthdays, or even if an MV just isn’t doing well. It’s a case of the company asking fans to do something they already do in exchange for something that most companies already do.

And, is asking for views also somewhat disingenuous on SM’s part? SM is such a large company and SNSD such a well-known group that we can safely assume the MV will reach 15 million views no matter what. As a point of reference, “I Got A Boy” is currently at over 88 million views. Seriously, SNSD’s dance practices frequently reach millions of views that other groups’ MVs only dream of. In comparison, B1A4 are a much smaller group from a smaller company, and so the move of asking for a smaller number of views comes off less greedy (though there’s still an obvious company profit) and more of a way for fans to give back to the band–with added incentive.

To me, this is a very strange move for SM and more understandable with WM, but I’m wondering if more companies will pick up on this strategy for the future, or if there are other examples from the past that I haven’t heard of. If more companies start asking for views, we could find our future selves refreshing like mad just to watch our favorite idols in their sweats. Let me know what you think in the comments!