Are Agencies Considering a New Kind of Long-Term Collaboration?

Teddy, Yoo Young-jin, Park Jin-young – most K-pop fans could identify these people as influential producers, and they could also associate them with certain respective agencies. Such tight-knit label-producer relationships are frequent, if not the norm, throughout pop music everywhere. The producers’ distinctive sounds can heighten the recognition value of a label’s songs, and their ability to write hits is surely also a reason as to why such strong bonds exist.

But there seems to be another development lately. Agencies are more and more interested in crafting similar relationships with other personnel as well. SM Entertainment comes to mind, as it is known to frequently work with the same choreographers (e.g. Tony Testa).

Some readers might think of YG Entertainment and their collaborations with fashion designer Jeremy Scott and graphic designer Mina Kwon. 2NE1 can often be seen sporting Scott’s clothing in photo shoots and during promotional activities. He also had a cameo appearance in one of their latest MVs, “Happy”. Mina Kwon has done very different kinds of work for YG, ranging from designing the hats used in Big Bang‘s “Bad Boy” MV to adding colorful letters to 2NE1’s “Happy” MV.

Yet, why would an agency associate itself so closely with another artist? Do they not fear that people would quickly get bored of only seeing one kind of style from them? In truth, collaborations with such artists can help an agency in creating an image for itself just as much as collaborations with producers or other creative staff can.

When taking a look at the example of YG once again, one can see that Jeremy Scott’s brightly-colored, aggressive designs support 2NE1’s image as a group perfectly. Many of Mina Kwon’s designs are of a youthful, rebellious nature and go along well with Scott’s clothes and other bold fashion choices which YG artists are known for.

Of course, there’s also Scott and Kwon’s close relationship with the artists, which seems to have existed even before these collaborations took shape the way they have now. This adds another layer to the way their association with the agency is marketed; and one which is quite different from the one in which label-producer interactions are marketed at that.

In the “Happy” MV, the scenes of Jeremy Scott hanging out with the girls might be quite bewildering if one doesn’t know who he is. But if the viewer knows that he is a well-known designer, friends with CL and frequently collaborates with them, then the scene gets another meaning. It seems like the viewer is expected to recognize him and like his inclusion was a deliberate decision which is supposed to add something to the MV. 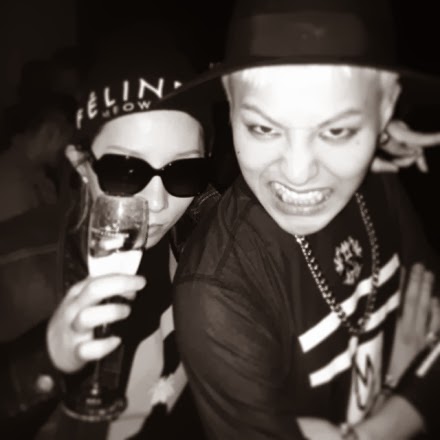 Knowing about Mina Kwon is not necessarily a must to enjoy the MVs or other YG-related material she has worked on. But it can become rather important if one follows YG artists like G-Dragon on social networks, which for many is an integral part of their fandom life. As has often been asserted, closely following what seems to be an idol’s private life/getting to know their supposed “real personality” is the main thing which binds many fans to K-pop for as long a time as it does. Therefore, interactions seen in this private life also have an influence on the idol’s or bands’ professional image.

It seems like the way in which agencies can profit from on-going collaborations with people directly involved with the performance (like producers and choreographers) and with people responsible for the fashion/art associated with the label differs somewhat. While seeing the name of the producers or choreographer mentioned at the beginning might elicit approval from fans, they predominantly work behind the scenes.

On the other hand, it seems to be advantageous to visibly include the people responsible for visually designing the image of the agency and it’s artists in the idols’ environment; may that be work- or leisure-related. Maybe this is just a YG thing in which they are trying to reinforce the idea of the “YG Family” concept. Or maybe that is the case because the agency can use the designing person’s former success to positively reflect back on it.

(BIGBANG and 2NE1, YouTube[1][2]; images via YG Entertainment and uknowminakwon)