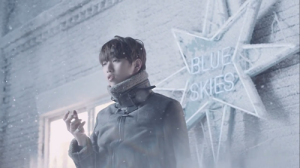 Just a couple of months short from having a hiatus from the Korean music scene for a year, B1A4 is back with their second studio album, Who Am I, and MV for lead track “Lonely.” This is their first comeback, since they achieved their first number one with “What’s Happening” on a weekly music show, MBC Show! Music Core.

The quintet debuted in 2011 with the single, “Ok.” This release, and their next couple of singles (“Beautiful Target,” featuring one of their most memorable Engrish phrases, “Baby, I’m Sorry,” and “Baby Goodnight”), seemed to project them as the quintessential K-pop group – nothing made them stand out.

This changed when the group released their mini-album, In the Wind, along with its accompanying single, “Tried to Walk.” This promotion cycle presented a mature B1A4, led by a leader who not only wrote and produced music, but also understood the capabilities of his members — if there is one pivotal song in their discography, it is the Jin-young-helmed “Tried to Walk.” Their next release, What’s Going On?, only confirmed their maturity and solidified their sound. “What’s Happening?” doesn’t sound like their prior singles, but it definitely carried the B1A4 vibe — it had the group going back to being their quirky selves without digressing to their debut image.

In addition to Baro’s role in hit show Reply 1994, the hiatus and their past discography (as above) have had fans waiting (im)patiently for their next single. The group’s return has been one of the most anticipated releases — at least among the Seoulbeats crew — of the current slew of comebacks.

So how exactly does “Lonely” fare?

Fans and frequent listeners of K-pop would probably notice the efforts that have gone into all of B1A4’s work – how could they make their release memorable? Or more specifically, how would they take the word ‘lonely’ and make it significant enough alongside two namesake songs by the prominent 2NE1 as well as Hyorin. Most apparently, the song presents a guy’s perspective — this male delivery can be likened to 2NE1’s “Lonely” hook but with a different feel – a masculine version of despair, loneliness and emptiness.

At first listen, what stands out from the track is the strong rhythm and its layers. It’s sometimes difficult to listen to a song with multiple layers, but B1A4 pulls it off. In fact, while “Lonely” may resemble “Tried to Walk” at first, you get hit by the realization in the middle of the first verse that there are also toned-down elements in “What’s Happening?” that encourage comparison to “Tried to Walk.” That is definitely evidence of their concerted efforts to streamline their sound. 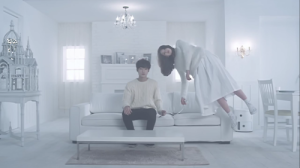 The lyrics are standard fare for K-pop – it demonstrates a break-up, where the man goes through his daily routines under the illusion that his ex is still by his side. But the beauty of this MV is its interpretation of the lyrics in a literal sense; the video is flooded with symbolism. Where the video could’ve been made to cut back and forth between past and present, the MV has done something almost whimsical — or ghostly? — with its subject matter.

The MV has Jin-young as the main male lead and we see him reminisce. He wears the clothes she bought for him, he admires their old photographs, he has meals, and he watches the movies they would’ve seen together. While this is going on, we see the female half of the relationship being fulfilled at moments, almost as if it were Jin-young’s memories of her coming through. But like all memories, the fleeting moment goes away in the blink of an eye.

This is where the whimsy comes in: Jin-young’s stray memories of his girlfriend are represented as a floating girl. If not for the piece of string attached to her — that he tugs at periodically — this female figure would drift right off. Jin-young clutches the ribbon closely, but as the memory fades, so does the girl. The girl balloon drifts out of reach and this part of the song is underlined by the appearance of balloons. Balloons seem to be an odd choice at first — in comparison to wilting flowers and the like — but a deeper examination of its symbolism shows that it’s quite the sound choice. Balloons are often associated with happy events — births, weddings, festivals and other celebratory things. But these bulbous sacs also have something in common in that they all loose their air eventually and “die” – that is, they deflate and are go limp in our hands. By using this object, Jin-young’s fading grasp of memories of his ex are demonstrated implicitly and explicitly, however you look at it.

While all of this goes on, the other members have an easier task. We see Baro rapping in a car, Sandeul in an empty hall and CNU on a bench. Gong-chan, the precious maknae that he is, looks good in this MV, but he gets the short end of the stick again with minimal lines. Looking at how well he handled his parts in “Tried to Walk,” where – gasp! – he got two solid parts, I’d expected something similar with the group’s next release. That is quite the downer, along with how we get too much of Jin-young and too little of Sandeul… although maybe it’s just a personal preference of duck over fox, if you get what I mean.

To accompany the meaning and beat of the song, what little of the dance we see is fitting. There are the quirky movements I’ve come to associate with “What’s Happening?”, as well as sharp executions that were last seen in “Tried to Walk.” In addition, we also get brief views of a dance involving a scarf that appear parallel to the main storyline of Jin-young and his ribbon.

In every way, “Lonely” is the combination of “Tried to Walk” and “What’s Happening?”. It could’ve easily gone south, but it did not. Combined with a memorable song is a beautiful MV that I rate a 4.5/5. What are your thoughts?