Where does one start with Ga-in?

The maknae of Brown Eyed Girls is known best for two things: her We Got Married stint with 2AM’s Jo Kwon, and her bold and sometimes daring solo releases. Her first solo venture was with Step 2/4 and it’s accompanying promotional track, “Irreversible.” This solo venture was then followed by her 2012 hit off her second mini-album, Talk About S. “Bloom” had everyone talking and for good reason – it may have just been the first time a female K-pop idol blatantly released a video where she actually had sex in the music video instead of relying on the society approved veiled sexuality.

After asserting her own agency with her previous release, and considering her releases as part of Brown Eyed Girls, the bar was set high for Ga-in’s next mini-album and her return was awaited by a good portion of people.

The album opens with title song “Truth or Dare.” All comparisons to “Blurred Lines” aside, the song speaks of a topic far different than the US hit. Like the music video, the song tackles the perception of Ga-in to the public. It tackles the various rumors and things people say about her, and she does it in a way that any female that has had something negative said about her would relate to as well. While “Blurred Lines” dealt with some misogynistic themes, “Truth or Dare” has Ga-in telling her detractors to go on and say whatever they want because she alone knows the truth.

The song conveys its meaning with straight forward lyrics. The opening verse has her challenging the boldness of her detractors with lines such as “It’s so strange/ When you’re in front of me, you can’t say anything/ But you talk a lot behind my back” because after all, if you’re going to criticize someone and put them under a microscope using your own morals as a compass, you might as well do it in person as well.

She continues and challenges the source of the material and questions the source with the second verse. It’s a normal occurrence in the entertainment field, colleagues rumored to be dating just because they were spotted in the same area. She questions this as well, asking if the rumor mill would go crazy at the mere touch of a hand. She then doubles back with a slightly veiled attack at netizens with lyrics such as “I’d be crazy to do those kinds of things with someone I only know by name/ Don’t say that because you can’t have me.”

Lyrically, the song is strong, tackling the rumor generating population. In the end, Ga-in doesn’t care and asks them to “Make it loud, make it more, make me hot” and declares that “Everything depends on you, on what kind of person I become” in reference to her public image.

This is all matched with a similar sound to “Blurred Lines,” knowing that people would remember the infectious tune. For everyone who wanted a “Blurred Lines”-like song minus the misogynistic lyrics which have been linked to the experiences of rape victims, Ga-in and her producer and lyricists have provided us with such. In fact, I’d like to compare it more to the artistic quality of the original, Marvin Gaye’s “Got to Give It Up,” rather than compare this track to “Blurred Lines.”

The mini album continues with its pre-release, “Fxxk U” featuring Bumkey. Hands down a personal favorite of mine, the thinly veiled lyrics are seemingly about sexual abuse withing a relationship, just like its accompanying music video. It starts with a strong question, “Where do you think you’re putting those bad hands?” and tells the man “Fxxk You, Don’t want it now/ I don’t wanna lay down next to you as if it’s natural.”

The lyrics additionally hint at the controlling nature of the male. “If it’s not you/ No one can touch me,” an allusion to the more mainstream thinking that all sexual abuse happens within a controlling relationship, something that has been proved wrong several times.

By the second chorus, the listener is left cheering for the female to leave the male, but it ends in the same way a good percent of such relationships end: with the girl staying with the male. There is the belief that she can save him (“If it’s not me/ No one can control me”), and while the story of the song has the female admitting that she’s “scared of this problem,” she goes on saying that she is okay and “I’m not going anywhere / I’m here/ Only by your side.”

By the end, Ga-in repeats the same two lines from the start of the song, symbolizing the repetitive nature of such a relationship.

What this song does is take an image that is hard to glamorize and comes at a time when more and more victims of various forms of sexual abuse are speaking out about their experiences against all societal pressure to keep quiet because of the stigma said society would then have the victim shoulder. The song does not speak of heralding a change in the ways of society, of inducing a wave of protests against the situation. Instead, the laurels of the song rests on showing to casual listeners what happens in one type of sexual abuse, and makes them think about the situation more and more, almost as if the song is a checklist of the normal signs of a woman in an abusive relationship.

After two songs heavy on the views of society on topics of rumormongering due to a perceived sexual nature of a person and sexual abuse within the confines of an established relationship, we then move to third track featuring 2AM and Ga-in’s ex-We Got Married husband, Jo Kwon.

“Q&A” opens in a similar manner as the previous songs – softly and not in your face – or, well, ears – allowing the listener to ease into the song. The contrast between Jo Kwon’s full voice and Ga-in’s husky tones are a pleasant contrast, sets the tone for the song, and is easily compatible with the simple piano playing in the background. For lack of a better description, the song is an emotional roller coaster ride, all without the generic pitfalls that most K-pop ballads fall into.

The song tells of a couple in the midst of a break up. It compares the situation – the dreaded break up conversation – to a dragged out question and answer interview. Like an interview, one throws a question and the other answers. The strength of the song is in the chorus where the duo throw questions back and forth, with each one seemingly the answer to the last.

Do you even love me?

Do you even have to ask?

Then why are you leaving me?

I don’t know if I can keep loving you anymore

Then what am I to you?

Does that even make any sense?

I mean it, believe me

This format also extends to the verses, with Jo Kwon claiming that his love has faded and Ga-in questioning him “Does that make sense? How could love change?” 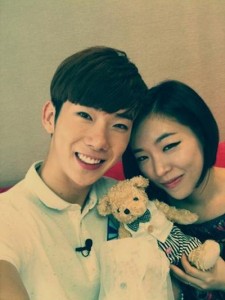 It was a stroke of genius, having Jo Kwon perform this kind of duet together. It gives the ballad an extra boost, given that these two are already publicly perceived to go well together due to their stint on We Got Married. As a whole, the song plays out as a musical number where the main romantic duo, after serenading each other as they fall in love, fall into the emotional stagnation suggested by Jo Kwon’s part and perform this very song as they break up.

And with that, the curtain falls on this song and we move onto the next track, “Black and White,” a livelier track reminiscent of the same influences as Ga-in’s debut track, “Irreversible.” The song alludes to the duo personalities that entertainers have to portray —  their public image and their private selves. One is black, the other is white. The danger in having such a situation is when the person themselves have difficulty distinguishing which is which, a situation implied in the song.

Produced by Lee Hyori, the song is sultry and seductive with a touch of sass. All together, it makes for a pretty strong and addictive package.

The mini-album is rounded out by “Exposure,” which provides a solid finish to a well-made mini-album.

Each track is a brick for this album – each ranging from passionate, fervent, and in some instances, intoxicating. The story told by each song is compelling and it is made clear that Ga-in and her producers are moving her away from the restrictive idol mold to being seen as an artist first and foremost. This may explain the lack of a clear hook, something that was heard in previous releases “Irreversible” and “Bloom.” Despite this, the album continues in the same envelope-pushing vein as “Bloom,” and it can easily be assumed this will continue onto Ga-in’s next solo promotion cycle.