CN Blue‘s music videos are always ones to look forward to for their consistent engaging quality. Making their comeback after over a year of absence, the group’s latest, “Can’t Stop,” is no different. Previous music videos have been successful in presenting concepts that utilize each of the members, something that’s difficult for a regular idol group let alone a band one. From the group-focused “Hey You,” “Love Girl,” “Intuition,” and “Love” to the individual opportunities in “I’m Sorry” and “I’m a Loner,” CN Blue has managed to avoid an overly disproportionate distribution of screentime, though, of course, frontman Yonghwa does tend to get more than the others.

“Can’t Stop” breaks that trend by putting Yonghwa at the forefront as one-half of the main couple. The group continues with previous usage of white models in their music video, here tiredly presenting the woman as an ideal figure to be won over. Somewhat fortunately, her presence is better incorporated here than in other uses in K-pop. The couple is in what initially seems like identical rooms with a mirror in between them. Later actions, like how both use the medicine cabinet and numerous paper airplanes, show that both are in the same room. The crucial line of “I live like a mirror every day” cements that idea. Everything in Yonghwa’s space reminds him of the woman. As a result, we see them both do similar actions or work with the same objects. 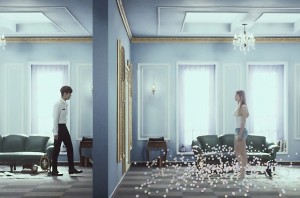 The music video ends after Yonghwa breaks the mirror between the two. The movement cuts off the mimicry. Rather than having memories of the woman, the broken mirror moves the two towards a physical meeting. The ending is left to be ambiguous. The subject too can be taken as heartbreak or confession, but the familiar structure of happier events in a brighter light versus the current state do lean towards heartbreak.

The music video provides primarily Yonghwa’s point of view, so the viewer is left to wonder about the type of heartbreak and the implications of the forcible destruction of the glass. Whether is favorable for both parties or an unwanted persistence is left up in the air. However, the manner in which the glass/mirror shards transform into harmless ping pong balls suggest that the attempt is not unwelcome.

One of the most exciting parts about this music video are the various representations of vibrancy presented during the chorus. From pages spilling with color to inclusion of the chorus hook in all sorts of locations, those elements not only relate to the burgeoning hope of regaining love but keep the music video lively and dynamic. The quick cuts during those moments also aids in projecting the uplifted mood that the chorus brings in contrast to the verses. 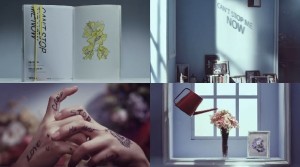 Also visually stimulating are the band scenes. While the jumps at the initial set are definitely on the cheesy side, each of the sets themselves makes an effort to showcase each member and provides a suitable range of moods to suit the contrasts within the song. The first one makes the most dynamic change with the incorporation of light, but the other two provide the larger contrasts to each other with the sunlight-filled room variations and the dark stone location.

The above two notions in combination with the already supernatural aspects to the plot create an ethereal air about the entire music video. We have clouds raining on individuals, glass transforming, flower petals floating, and physical representations of shared relationship spaces. The contrasting lights and fairy-tale band sets add to the visual appeal, as do the unlimited flowers and hopeful paper airplanes. Even with all the little additions, the music video retains maturity, which is in part assisted by the orchestral notes within the song itself. The four men are styled appealingly in stylish suits, though I’m fairly certain the peach- and mustard-colored suits were not a good mix. In contrast, the woman is dressed down, largely to illustrate a natural and approachable figure, unconcerned and casual in her environment. 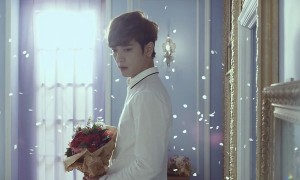 My criticism, aside from the group’s tiring, repeated use of the white model, is that Yonghwa’s acting consisted largely of making the same face the entire time. It wasn’t horrible, but it definitely could have been done to better capture the longing and consuming love through facial expression rather than through other elements. I think he actually showed several times more emotion during the band scenes than when he was supposed to be acting. But overall, the music video succeeds in portraying emotions due to the music, not the scenes themselves.

As a whole, CN Blue’s music video is a pleasure to view from beginning to end. It includes enough quirks to catch interest and progresses fast enough to maintain it. The video takes a different route from the group’s previous videos, a more serious and polished one that shows a different side to the jaunty band. Though the band is always good on screen, the real stars are the details, and they carry the video to another height.

How does CN Blue’s comeback compare to their previous ones? What were your thoughts on the music video?