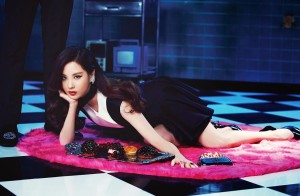 Sound the trumpets and pull out the confetti, the top contenders of the girl group world are back. Girls’ Generation is back with a Korean mini album. While they have been doing small activities here and there, this is their first big Korean promotion since “I Got a Boy.” Some were a little nervous about this comeback. Would they settle back into their sugary sweet image of yesteryear? Or would we get another copy and paste track a-la “I Got a Boy?” The teaser images did spark quite a bit of interest. It was certainly a more mature image than most of us were used to and it gave hope (at least for me) that we would get something a little more well-rounded.

There was the brief debacle of the “Beyonce” that was seemingly pulled when the single was accidentally released a bit early. Some fans were lucky enough to catch up some or all of the tracks before the tracks were pulls, and many YouTube videos show casing the song were taken down as well. But we can rejoice! The album is now available to download (and review!)

The title track “Mr. Mr.,” for me, was a relief. Once I heard the techno beat, I knew they weren’t going the cutesy route. While it is their bread and butter, they’re getting older now, so it best to see a bit more of what they can do besides being cute. I personally found the track quite nice. Not anything to write home about, but it was a good track for the girls. There are brief moments of “rapping,” that do being back horrific flashbacks of earlier attempts, but it can be assumed that those are to give more lines to the girls that are a little vocally weak. In the live, I expect 2:37 to give us a well choreographed dance break. They pulled it off with the last single, so I expect the same if not better.

“Goodbye” was quite a surprise for me and is honestly what I’d like to hear more of from the girls. It was a smooth track, a nice b-side. The vocals were good and it was a nice slice of where the girls were headed musically. By contrast, “Europa” was a bit of a let down (and by a “bit,” I mean completely). It sounded like a throw back to earlier work, but not a very good once. It came off as a bit bland and wouldn’t be one I’d listen to often. Perhaps it was to give something to the fans of their sweeter days, but it took away from the album for me.

“Wait a Minute” followed the same path as “Goodbye.” Another upbeat track, it was youthful without being in your face. The girls sang it well (well, the ones that are allowed to sing). If they do cute in the future, I would prefer it to sound a bit more like this than bubblegum pop. Strong performances in the past show a glimpse of a well-rounded, talented bunch of girls, so they don’t have to lean on the cute image to have a good single.

A given for any single from any group, the ballad. Usually slow, about some love, and meant to remind people that the group can harmonize. “Back Hug” is pretty much a vocal exercise, but doesn’t leave much of a mark. I could listen to it without skipping, but it won’t be something to get stuck in my head.

Ending the single is “Soul.” Much like “Mr. Mr.,” it’s an upbeat track with a heavy beat. I could see why it wouldn’t be a title track, but it’s a nice way to round the album back to the starting pace. Not bad, but not amazing. I liked it, but I could see myself being the minority. (Though I could of done without that “rap”)

All in all, I like the mini album. It gives a little something to everyone. If you want something more “hard hitting,” they got it, and they even threw in some softer stuff as well. I’m glad that Mr. Mr. was the title track, as it is sure to give them another good round of performances. For an “okay” album that did better than expected, 4/5.